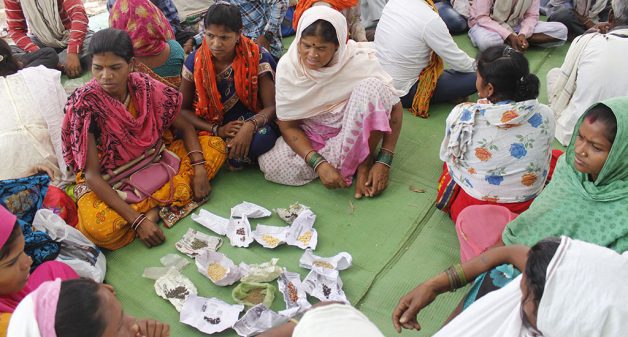 “What do the men know… we women are the ones who conserve the seeds, it is our responsibility. It has been in our culture since the time of our ancestors. We are the ones who know which seed to plant where and in what quantity, how much to preserve for future use, how much to keep for consumption… the men are not too worried about all this,” said Somwati Uike of Muala Sani village.

The village comprising mostly of tribal households is one among several such villages situated in the Mandla district of Madhya Pradesh. Mandla is one of the five districts in the state to be fully notified under The Provisions of the Panchayats (Extension to Scheduled Areas) Act, 1996, or PESA, which ensures self-governance through gram sabhas or village councils.

According to the Socio Economic and Caste Census 2011 (SECC 2011), more than 62% of the households in the district belong to the Scheduled Tribe, a significant number compared to the state figure of 25% and the national figure of 10%. They belong mainly to the Gond and the Baiga tribal groups.

These tribes residing in this region, along with other forest-dwelling tribes such as the Yadavs, Panikas and Ahirs, depend mainly on agriculture. Collection of non-timber forest produce and daily wage labor are their other sources of livelihood.

As per SECC 2011, about 74% of the land in Mandla district is un-irrigated; people practice rainfed agriculture to cultivate paddy, maize, lentils, pulses, mustard and wheat among other crops. With a smile, Poona Yadav of Barkheda village said their cultivation is at the mercy of the one above.

“In addition to paddy and maize we cultivate leafy vegetables and other vegetables like okra, flat beans, tomato, brinjal, chilli, pumpkin and turmeric in our homestead land,” said Yadav. “We also have a lot of trees such as moringa which fulfills our household requirements.”

In this complex milieu of agriculture with a close link between diversity and resilience, women play the most important role as the custodians of this vast variety of indigenous seeds.

Similar to other communities across the world, women belonging to the tribal and other ethnic groups of this region play a significant role in passing the knowledge of seed conservation and seed preservation from one generation to next.

How did they learn, for how long have they been practicing it – these questions are met with perplexed expressions and responses of “We have been doing it for as long as we know, since childhood we have seen our mothers doing this and we have just followed.”

The social role ascribed to women in the agricultural system has also influenced this knowledge to some extent. “While harvesting the crop we observe which part of the field has crops with a better yield. We judge the seeds based on their weight and quality and keep it separately while threshing,” said Poona Yadav.

The women farmers fill the selected seeds in a sack, seal it and store it in the granary, locally known as kothi, until the next season. “Similarly for vegetable seeds, once the fruit has matured, we leave it to dry, remove the seeds and then store them. When the time for sowing is near, we retrieve them for use,” said Yadav.

Echoing her words, Rampyari Uike of Barkheda village said, “We know how much seed is to be planted in which field in the homestead. Afterall, we know how much is required for our household, so we sow the seeds accordingly.”

Another woman farmer, Ganga Bai Sarote of Muala Sani village, expressed how this practice resonated strongly with the knowledge of maintaining resilient systems. “We need to have different types of seeds. Each land is suitable for a different type of crop,” she said. “Some grow well in water-logged soils, some on sloping lands with low water availability. We decide accordingly.”

“Traditional varieties of paddy seeds such as luchai, oraibhuta, sathiya and lal dhaan, have a greater capacity to withstand changes in rainfall patterns and sustain during dry spells between the monsoon season,” said Sarote. In the current scenario where rural communities are facing the disproportionate impact of climate change, resilience to fluctuating micro-climatic conditions is important to sustain.

The immediate impact of seed conservation is the reduced dependency on the market for purchase of seeds as well as food. With great contentment Rampyari Uike said, “Out of the total of four sacks of paddy seeds that I needed this year, I bought only one from the market.”

For the remaining quantity she used the seeds that she had preserved from the previous year. One packet of seeds costs around Rs 800 in the open market. Thus preserving her own seeds helped Uike save Rs 2,400 this year.

Similarly, vegetables cultivated in the homestead land help women in reducing their dependence on the market for purchasing vegetables. “Even if we are able to meet the requirements of our household for a couple of months, it is enough for us. It helps us save money which we would have to spend for buying vegetables from the market,” said Poona Yadav.

“The vegetables we get in the market are full of chemicals. We use only cow dung manure for the vegetables we grow in our homestead land,” asserted Somwati Uike. “This is beneficial for our health too. We are easily able to differentiate the taste too.”

In a district like Mandla where more than 91% of the households have a monthly income of less than Rs 5,000 as per the District Employment and Income Report, this reduced dependency on cash income to meet their needs is extremely important.

What happens if a household hasn’t been able to preserve some seed and needs it? The practice of seed conservation is closely associated with another traditional practice of seed exchange which is deeply interwoven in the social fabric of the communities here.

“If I don’t have a particular seed, but my neighbor has it, I will take some of it from her and in return I will give her what I have and she doesn’t. This year I took seeds of okra and bottle gourd from her and gave her seeds of pumpkin,” said Poona Yadav.

The women in the entire village follow this practice. “This has been the practice for as long as I can remember,” said Yadav. It provides a crucial support in maintaining the diversity of the crops grown by a household as well as in reducing the community’s dependence on the market for seeds.

It is not just the seeds which are exchanged, but also the produce. “If there is excess production of vegetables in the homestead land of someone, anyone from the village can take vegetables from them free of cost,” said Poona Yadav.

Village institutions also play a role in facilitating this exchange of seeds. With the forces of market that have now penetrated into the villages, there has been a slow but steady advent of improved variety and hybrid seeds into agricultural practices.

However, in such cases, village institutions led by women have created platforms to revive the exchange and use of traditional varieties of seeds. “We brought seeds of different traditional varieties of paddy such as peeli luchai, oraibhuta and nunga from neighboring villages and distributed it to farmers in our village,” said Aswanti Udde, a farmer from Gubri village.

Such exchange happens on the condition that after the harvest, the recipients would give the seeds to more farmers in the village. “Women in the village are also exchanging vegetable seeds with each other during meetings. Earlier I could exchange seeds only with one or two women; now during our meetings, I am able to exchange seeds with more women,” said Udde.

Several villages have also started celebrating seed exchange festivals to give a greater impetus to this practice. The women residing in this region have a strong determination for preserving and protecting these systems of seed conservation and exchange.

Dhwani Lalai and Satyasovan Das are associated with Foundation for Ecological Security. Views are personal.