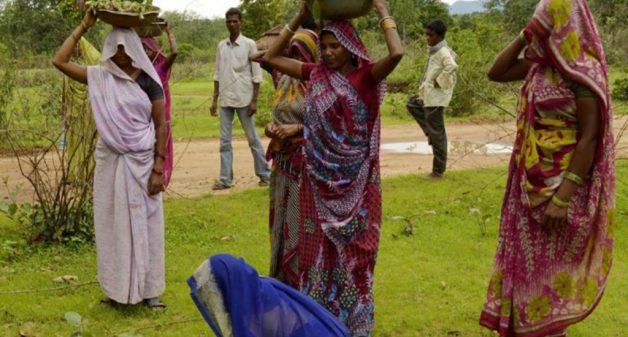 The world’s largest anti-poverty program may also help India achieve its target of creating an additional carbon sink of 2.5-3 billion tons of carbon dioxide-equivalent, through additional forest and tree cover by 2030, in line with the Paris Agreement on Climate Change.

The scheme’s capacity to sequester carbon dioxide may rise to 249 MtCO2 by 2030. The researchers calculated carbon sequestration by assessing biomass in plantations and carbon stored in the soil of work sites in 158 villages spanning 18 agro-ecological zones of India to arrive at the conclusion.

MGNREGS has been offering unskilled manual work to rural households in India since 2006. It has been a major source of relief in times of distress like droughts. It gained more importance last year when millions of migrant workers were forced to return to their native villages after the government imposed a complete lockdown in wake of the COVID-19 pandemic.

The IISC researchers found that drought-proofing activities, including tree plantations, forest restoration and grassland development, captured the maximum carbon, making up for a little over 40% of the total carbon sequestration under MGNREGS.

The carbon captured from drought-proofing ranged from 0.29 to 4.50 ton per hectare per year (tC/ha/yr) depending on the region. Land development activities, including earthen bunding, stone bunding and land levelling, captured 0.1 to 1.97 tC/ha/yr while minor irrigation sequestered 0.08 to 1.93 tC/ha/yr.

“Even though MGNREGS is a livelihood security program, its environmental benefits were always evident because most activities are related to natural resources like water, land and trees,” said Indu K Murthy, principal research scientist at the Center for Study of Science, Technology and Policy, who co-authored the study.

“This is the first time we could quantify the positive impact at a national level covering most agroecological zones,” said Murthy. Negative carbon sequestration for some activities in some of the agroecological zones were recorded, as carbon was released from the soils due to crop production practices, soil slope and other factors.

India has placed emphasis on MGNREGS as a contributor to carbon sequestration in its Third Biennial Update Report submitted to the United Nations Framework Convention on Climate Change earlier this year.

“The study highlights the mitigation co-benefits of MGNREGS. This is salient in the current climate imperative where scientists are calling for climate-resilient development,” said Chandni Singh, research consultant at the Bengaluru-based Indian Institute for Human Settlements, and contributing author of the IPCC’s Special Report on 1.5 degrees.

India has been lagging on the pledge to create an additional carbon sink of 2.5 to 3.0 billion tons of CO2-equivalent through additional forest and tree cover by 2030. In the last two years, India’s forests carbon sink has grown by just 0.6%. To meet the target, the sink has to grow by at least 15-20% over the next 10-year period.

Drought-proofing activities, which include planting of trees under MGNREGS would qualify for the carbon sink target and is projected to create a cumulative sink of 561 MtCO2 by 2030. This will be around 18% of the total target.

“Forest sector alone may not be able to meet the target. There is, therefore, a need to incorporate tree planting, especially fruit and fodder yielding trees, into most natural resource management activities under MGNREGS,” said Murthy. “This will generate alternate income and livelihood sources for people while carbon sequestration will be a co-benefit.”

The carbon-capturing benefit is just one aspect of MGNREGS. The social security and natural assets created through the scheme have been building the resilience of the most vulnerable people to the climate crisis for many years now.

A 2013 study done by IISC found that wage work done under MGNREGS led to considerable environmental benefits and vulnerability reduction in 40 villages of four states through improvement in water and land resources, enhancement in soil carbon and reduction in surface run-off and soil erosion.

Bharatbhai Gughal, a farm laborer at Dhank village of Rajkot district in Gujarat, remembers the time when the village had just two ponds. “There was only one cropping season and farmers would grow wheat, cotton or groundnut. During drought years even that was not possible. My father used to migrate to Rajkot to do manual work at a construction site every year,” he said.

Dhank lies in Saurashtra peninsula of Gujarat known for extreme temperatures, erratic rainfall and high evaporation rate. It has a semi-arid climate and gets an average annual rainfall of 709 mm. The Deccan trap basalt rock underlies the ground which is a poor keeper of water. At deeper levels, fractures and joints in the stone store groundwater in many places.

After a prolonged drought around 20 years ago, eight more ponds were excavated at Dhank. Their maintenance is now done under the rural job scheme. “All 10 ponds hold good water that helps recharge groundwater which villagers access through wells and borewells for farming,” said Gughal.

Farmers now grow multiple crops of wheat, pearl millet, cotton, soybean, groundnut, onion and chillis over three seasons. “There is no need to migrate because plenty of work is available in the village throughout the year. It would not have been possible had there been no ponds to replenish the groundwater,” said Gughal.

The scheme also helps the vulnerable regions brave extreme weather events. Rushikudda village of Srikakulam district in Andhra Pradesh faces regular cyclones. MGNREGS labor was used to deepen and widen a local river and drainage channel to push out the water from cyclones and storms back to the ocean.

This led to downstream benefits for households in Isakalapalem village where buildings were less damaged during Cyclone Hudhud in 2014 as water flowed back into the ocean through the channel, rather than into nearby households, found a study by the International Institute for Environment and Development (IIED).

Around 65% of surveyed households of the village also reported increased income through guaranteed wages and greater availability of farm work due to the creation of irrigation and agricultural assets, which helped them cope during cyclones.

Despite a mixed track record, MGNREGS has kept the large rural workforce engaged in face of the ongoing economic distress due to COVID-19 restrictions. The scheme saw a 50% jump in the number of households employed in June 2020 compared to June 2019.

Considering that the climate crisis is likely to aggravate poverty and food insecurity, social security schemes like MGNREGS, which reach the most vulnerable must remain robust and effective. As Murthy pointed out, carbon sequestration will be a co-benefit.

A longer version of this story, first published in Mongabay India can be read here.