Incessant rains and wild elephants damaged water melons that cultivators could not sell during the lockdown. Organizations helped them reach buyers via social media 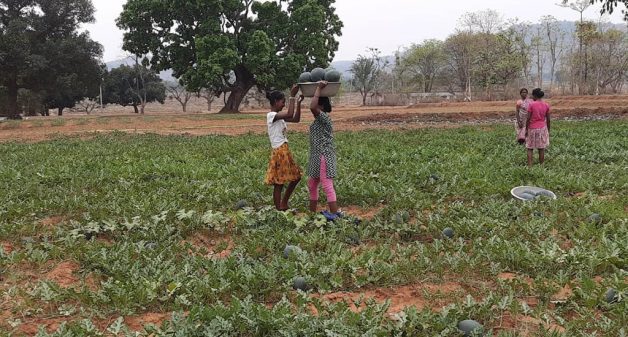 Agriculture is the main source of livelihood for villagers in Gumla district situated in the southwest part of Jharkhand. Most of them are small and marginal farmers. Initially the villagers cultivated crops for their own consumption.

The NGOs introduced solar lift irrigation so that the farmers could grow summer crops. The NGOs encouraged the farmers to grow water melons. Considering the demand, many farmers started growing water melons.

Presently more than 2,500 farmers grow water melon in Gumla district. The acreage under water melon is around 2,000 hectares. The farmers sell the produce in local markets, from where the local population and traders buy the fruits.

Traders visit some of the remote villages and buy the fruits directly from the farmers at a much cheaper price. These traders sell the produce in the main Gumla market, Ranchi; and the A grade produce is sold to bigger traders for greater returns.

However, in the past two years due to the COVID-19 pandemic, in addition to crop raids by wild animals, the water melon farmers of Gumla have been in financial distress. Online selling facilitated by NGOS have brought some relief.

Sumita Barla, a farmer in Arahara village had grown water melon in two acres of her land for two years consecutively hoping that her investment would bear fruitful results. Unfortunately, she and the other farmers suffered losses.

Transportation was limited due to the lockdown imposed to stop the spread of COVID-19. No buyers visited Arahara or the other villages to purchase the water melons. “Last year I invested my savings and this year I took a loan. Now I am hopeless about my returns. I do not know if my situation will improve in the near future,” said Sumita Barla.

Watermelon harvested in thousands of acres were left to rot in several villages, as traders and buyers were not able to procure the fruits during the lockdown. In the last few years farmers could sell the fruits at Rs 5 to 7 per kg, but not since the lockdown last year. Farmer Jayanti Karkatta managed to sell a part of her produce, but at Rs 2 per kg.

Apart from the farmers, the workers who are dependent on daily wages from farm activities such harvesting water melon, loading and unloading, and related work have also suffered the brunt of the situation.

Some of the farmers distributed the water melons in the hamlets of their village to save the produce from perishing. But the produce was in large quantity to be consumed by the villagers.

As there are no cold storage facilities, the farmers left the fruits in the field. When Cyclone Yaas made landfall in Odisha, it resulted in heavy rains in Jharkhand. The harvested fruits as well as the ones ready for harvesting were spoilt during the rains.

“In the past, we have experienced bad weather at the time of our harvest but this time we already had many reasons for not being able to sell our produce. The rains made it worse and all the water melons rotted in our field,” said Pratima, a woman farmer of Kuli village.

Farmer Bijender Barla of Ramtolya village said that in addition to the lockdown issues, the impact of cyclone affected a lot of farmers. “The fruits rotted because of the incessant rains,” he said.

Crop raids by elephants have happened before but this year it compounded the problems of the farmers. “All my efforts at saving the produce from elephants, rains and pest infestation were wasted and I could not save my crops,” said Savitri, a woman farmer of Chatakpur village.

“I have spent almost all my days and nights to save the crop from the attack of wild elephants after a part of my crop was damaged this year. In spite of all precautions and efforts, I could not earn my investment back, forget about profits,” said Farmer Bijender Barla

Some of the farmers who took some water melons to sell in nearby markets had no returns even for their transport back home. “We are small farmers in the village. We do not know what to do,” said Barla. The farmers sought the help of local NGOs, according to Barla.

The farmers demanded that the state and central governments acknowledged this crisis and assess the losses to assist them. A high-level committee has been formed by the government.

As it was during the Ramadan fasting period, farmers had remained hopeful. Some local NGOs formed virtual platforms to enable the sale of water melons for the farmers. They also started a drive through social media platforms and helped the farmers sell some of the produce.

Tripta Sharma works as a program officer at Wipro Foundation. Ankit Tandon works as an executive at PRADAN. Views are personal.