Mission Gaurav, an initiative to support rural households during the lockdown, makes villagers aware of various government welfare schemes and helps them access the entitlements 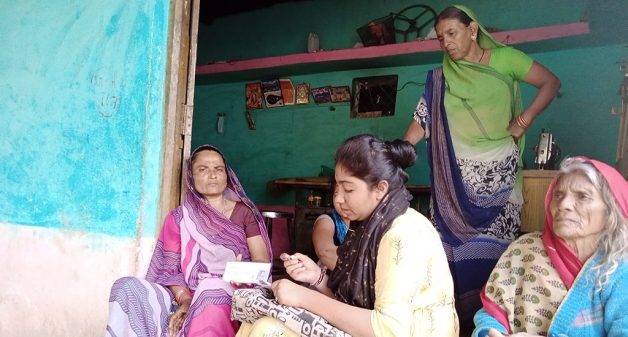 Manju Munnalal resides in Jalgon village in Rajpur administrative block. The village of 900 households is in Barwani district. She lost her husband in 2020. She is a daily wage laborer, who has to support her four daughters aged between 14 and 21 years, and her 12-year-old son who is studying. After losing her husband, Munnalal found it difficult to fulfil the family’s needs.

Transforming Rural India Foundation (TRIF) has been actively working in Rajpur block. As a response to the COVID19 pandemic, the team started economic restoration under Mission Gaurav, an initiative by Tata Trusts and Centre for Microfinance, to help returned migrants and the marginalized during the COVID-19 pandemic.

Most of the villagers in Jhabua and Barwani districts were not aware of government schemes that could be of aid, especially to sustain through their loss of livelihood during the lockdown. TRIF team members supported returned migrants and vulnerable families restore their livelihoods and helped them access government entitlements due to them.

Dinesh Katara lives in Bherugarh, a village predominantly of tribes in Thandala block. The 33-year-old works as an agricultural laborer. His income was not sufficient to sustain his family and parents. They were struggling financially, to fulfill their everyday needs.

TRIF has been working actively in Thandala administrative block of Jhabua district for the past two-and-a-half years. TRIF team members learnt of many youth who were unemployed. The youth wanted to find employment but did not know how to.

Manisha Katara, TRIF team member, discussed with her manager, about the youths’ desire to find employment. TRIF organized a job fair at Thandala. Manisha Katara and her colleagues informed all the youth and motivated them to attend the job fair.

Dinesh Katara is one of the youth who attended the employment fair. An Ahmedabad-based security services firm selected him to serve as a security guard. He earns Rs 12,000 per month and the family is now in a better position financially.

Entitlement for the differently-abled

The team identified 456 villagers. They shared the compiled list with the district collector, who ordered a camp to certify the differently-abled. The team conveyed the information to everyone concerned individually and also through village collectives and youth groups.

Contrary to expectations, more than 900 villagers registered for the camp and 598 received a disability certificate. With the certificate as the first step, the team helped them get access to various social protection schemes.

Similarly, in Petlawad administrative block in Jhabua district, a 10-year-old divyang had a defective hand and hence could not get an Aadhaar. Her below-poverty line family could not get the benefit of social protection she is eligible for.

TRIF team informed her father that an eye scan could be done where a finger scan was not possible. The team arranged for her Aadhaar by getting her eyes scanned. As a differently-abled person, she is eligible for Rs 600 per month. A camp was then organized to help the other divyangs get a disability certificate.

In Rewja village in Barwani district, Mission Gaurav helped women from very poor families make a living through tailoring work. During a discussion with the women of local self-help groups, they said that they wanted to take up work that could be done without leaving the village.

It was learnt that quite a few women knew stitching. The women were interested in starting a tailoring center. However, given their economic conditions, buying sewing machines was beyond their means. Team member Bhimsingh discussed the issue with the officers at the National Rural Livelihood Mission office.

A two-day training session was then arranged at a center in Bilwani for the Rewja village women who were interested. They learnt how to use the latest technology sewing machines, how to get orders, increase income, expand the center, etc.

With a loan from the cluster level federation, the women bought five sewing machines. They opened their center in a place that belongs to the panchayat. They have started stitching clothes as per the demand of the local market. They plan to develop it further so that they can train more women and take bulk orders.

Neha Gupta and Arjun Kaurav are associated with TRIF. Views are personal.