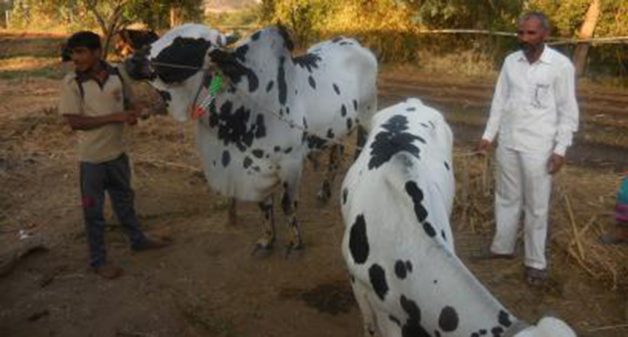 Indigenous Dangi cattle are found in pockets of Nasik, Thane and Ahmednagar districts. A majority of farmers rear Dangi cattle for draft purpose and for dairy products. In general, the entire family of a farmer is engaged in animal rearing.

In 2014, BAIF Development Research Foundation (BAIF) initiated the conservation and revival of indigenous breeds including Dangi. Towards this end BAIF carried out various activities including a preliminary survey on livestock in the districts.

BAIF undertook the conservation through Maharashtra Gene Bank Project (MGBP). The objective was to conserve important indigenous livestock breeds by blending traditional and scientific knowledge and by involving the community. BAIF provides the necessary scientific support to the breeders.

Dangi rearing is a traditional family business of Ashok Sakharam Bendkuli of Kokanwadi village in Akole administrative block, Ahmednagar district. At present, the family has around 150 animals in their herd including cows, calves and bullocks. Bendkuli was one of the Dangi breed conservators under MGBP.

The management practices that Bendkulis follow for the Dangi herd are semi-intensive, and they allow open grazing. They also migrate to the Konkan region during summer months to access better grazing grounds. The special care of animals varies as per age and body requirement.

Bendkuli has formulated a special feed containing black gram, soybean, rice and jaggery for breeding bulls. The dry and green fodder ratio is maintained by feeding maize, bajra, lucerne, grass and rice straw. Annually on an average, he earns a gross income of Rs 4.5 lakhs from the sale of calves, manure, milk and milk products such as khoa and ghee.

Bendkuli was one of the Dangi breed conservators under the Maharashtra Gene Bank program. He benefitted by learning about quality breeding and green fodder production, in addition to getting technical guidance about health services. Better care has resulted in a herd of good and productive animals, which will help in taking the conservation forward.

Bendkuli’s family has a passion for rearing bulls and in participating in bull champion competitions. Bendkuli participates in the Dangi Festival at Rajur, Ghoti, and Khirvire and various exhibitions at Kalas, Rahuri, Nasik, etc. To date, his bulls have been selected for the champion award as Dangi breeding bull nine times. Nandyais one of their champion breeding bulls.

Bhagwan Santu Satgir of Kombhalane village situated in the hilly Sahyadri ranges of Ahmednagar district, is one of the keen Dangi breeders in the locality. Although agriculture is his primary occupation, he practices animal husbandry too. He possesses more than 100 Dangi animals that bring a major share of the family’s income.

Sadgir has Bahala, Para, Manara and Shevara strains of Dangi cattle. He has deep knowledge about the identification of elite Dangi animals. He participates in Rajur and Khirvire animal exhibitions and gets recognition and appreciation for his Dangi cattle.

Sadgir became an active farmer of the breed conservation program. He improved his animal housing and management practices according to the recommendations of MGBP experts. Before he became a part of the project, he used to rear animals by free grazing, due to which growth and production were not optimum.

Now Sadgir has understood the importance of a balanced diet for his cattle. He has started cultivating improved fodder varieties. The improved fodder crop facilitates him to provide a balance of green and dry fodder, resulting in optimal growth of his cattle.

Dattu Karbhari Dhonnar is a Dangi breeder in Samsherpur village in Akole block of Ahmednagar district. He is a traditional Dangi rearer and has a herd of over 25 elite Dangi animals. He participates in the Dangi festival at Rajur and Khirvire every year, and his animals have been getting champion award for Dangi breeding bull for the last 10 years.

He has deep knowledge of selecting animals based on certain criteria and hence his bulls get the championship. He indicated that Dangi animals are sturdy and acclimatized to the local environment where other cattle breed will not sustain. The major criteria for selecting the animals are looks, size, color, temperament, the milk yield of the mother and other related females.

Dhonnar also follows the traditional methods of bull exchange or bull change to avoid inbreeding within the herd. The management practices for keeping the Dangi herd is semi-intensive as his animals graze on open lands the whole day. He feeds them at home with some grains, in addition to dry and green fodder.

With low input cost, he gets regular manure, a calf in addition to milk for home consumption from a single cow. Under the MGBP, he has been availing artificial insemination services for the last three years. Besides breeding services, BAIF experts provide technical guidance in animal health and fodder production.

His success story was broadcast on Krishidarshan TV program about community-led Dangi cattle conservation. The proper care of cows, newly born calves and young heifers has resulted in a herd of good and productive animals which are the repositories of future breed conservation.