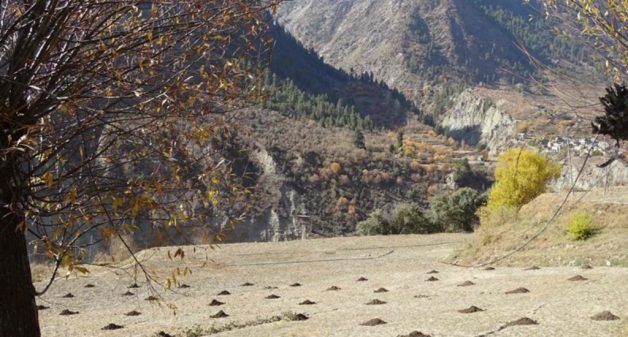 Ladakh’s mission to mainstream organic farming by 2025 banks on dry toilets as one of the measures towards realizing its objectives in organic farming and carbon neutrality. The two-tiered sanitation structures have supplied organic manure to local communities for their agricultural needs, in this water-limited region, for generations.

The dry toilets compost human excreta to natural manure (night soil compost) by the addition of a mixture of dry materials such as dried livestock dung, ash and wood chips. The night soil compost comes in handy for the local agricultural requirements, particularly in the dry cold desert regions such as Himachal Pradesh’s Lahaul and Spiti valley and the Union Territory of Ladakh.

But social apprehensions, unhygienic conditions of dry toilets, urbanization, modernization, and increase in tourism have led to the popularization of flush-system toilets and the decline in the use of these traditional structures since the 1980s; the easy availability of chemical fertilizers catering to cash crops has also impacted its practice, experts, government officials and local community members said.

Scientists at CSIR-Institute of Himalayan Bioresource Technology (IHBT), may have an answer for the dry toilets, with improvements. They are trying to use beneficial bacteria extracted from the night soil to make a compost booster that substitutes the dry materials, to speed up the degradation of the night soil.

Carrying on the traditional system is also one of Ladakh’s efforts towards organic development and to make the union territory carbon-neutral. The plan nudges users to continue using the traditional dry toilets, with improved aesthetics and composting.

“Since the booster is prepared using beneficial cold-tolerant bacterial consortia with plant growth-promoting characteristics, it boosts crop productivity. It is very user-friendly as the users need only a handful of the material after defecating,” said scientist Rakshak Kumar Acharya, at the Biotechnology Division, CSIR-IHBT, Palampur. The booster is safe in terms of pathogenicity.

According to the institute’s director Sanjay Kumar, “The technology saves water, produces quality compost from the fecal material to help sustain the agroecosystem of the region providing opportunities for the generation of local start-ups.” Acharya and colleagues have distributed the compost booster to households in Himachal for field trials since 2018.

“Families in rural Leh still use the dry toilets in summer and winter because there’s no option given the geographical and climatic conditions. While we have the flush toilets in cities for tourists, we do have environmentally-conscious tourists who prefer to use the traditional system to conserve water,” Tsetan told Mongabay-India.

The total cropped area in Leh is 10,223 hectares and only 0.2% of the geographical area is under cultivation. Temperatures drop to minus 30 degree Celsius in winter. “We have a very narrow window for agriculture (in summer) when we use the snow and glacial melt for farming our staples wheat and barley, and some vegetables,” said Tsetan.

“We anticipate that with future climate change impacts and with glaciers receding, we will need to strengthen our water conservation measures. Traditional measures such as dry toilets, with scientific interventions, will have an important role to play in organic farming,” Tsetan added.

Tek Bahadur Sapkota, climate change scientist at International Maize and Wheat Improvement Center, Mexico, points out that organic farming is a nature-based solution to climate change as long as there is sufficient land to grow food for the growing population.

“Organic farming, if combined with minimum soil disturbance, can sequester carbon. The non-requirement of chemicals not only avoids chemical-induced emissions from the field (e.g. carbon dioxide, nitrous oxide and nitrogen oxides) but also the emissions associated with production and transportation of such chemicals,” Sapkota told Mongabay-India.

There are trade-offs to be considered between organic farming objectives and climate action and food security goals. “If we rely too much on animal manure for organic farming and if greenhouse gas emissions associated with livestock production are included, this may be even higher in some cases,” Sapkota added.

Jagdev Katoch, a retired school principal in Goshal in Himachal Pradesh’s Kullu district, who has used CSIR-IHBT’s compost booster in his residential dry toilet since 2019, noted that due to the decline in the availability of night soil compost in his village, one has to rely on livestock manure and chemical fertilizers for farming.

“But night soil compost is more potent than livestock manure for plant growth and hence preferred. We use dry toilets in winter. In summers, many from the old generation use dry toilets but the youth prefer modern toilets. Modern systems are also easy to clean,” Katoch told Mongabay-India.

Currently, residents/farmers have to rely on the research institution to source the compost booster. “We are trying to encourage unemployed youth to take up this venture as the demand in the local area is huge,” said Acharya of CSIR-IHBT. Besides, the regular supply of the compost booster is disrupted during extreme winters due to snowfall and difficulty in transportation.

J.C. Kuniyal, head of the Centre for Environmental Assessment and Climate Change at G.B. Pant National Institute of Himalayan Environment, Uttarakhand, who was not associated with the compost booster research but has worked on traditional agricultural practices including night soil compost, adds that night soil compost in dry high mountain areas adds moisture to the porous soil necessary for crop growth.

Because of limited vegetation due to the cold climate, it is also difficult to maintain enough livestock for adequate farmyard manure. The changing agrobiodiversity from traditional crops to cash crops in high mountain regions has also impacted agriculture practices with reliance on chemicals to stave off pests and enhance productivity.

“The introduction of high-yielding varieties has impacted the agrobiodiversity and resource use efficiency in Lahaul as per our studies. A balance has to be maintained between the use of chemical fertilizers and organic inputs for food security and environmental conservation. However, there is a resurgence in interest in local knowledge which together with a bit of science and innovation, could also help revive traditional agrobiodiversity,” added Kuniyal.

Sustainable farming strategies are advocated as one of the ways to shore up climate resilience for vulnerable communities. The limited success of the Green Revolution in the Hindu Kush Himalayan region represents one of the biggest opportunities for developing successful rural communities that rely on organic farming and agroecology, states Mainstreaming of Organic Agriculture and Agroecology in the Himalaya Region report released at the United Nations Desertification summit in 2019.

Climate change impacts in high mountains, including the Himalayas, will pose challenges for water supply, agricultural production, etc., the IPCC said. A 2019 study emphasized that rapid urbanization in the Himalayas, driven mainly by tourism, is threatening water security in the area which will only be worsened by climate change.

Sahana Ghosh is a Kolkata-based journalist. Views are personal.

This story was first published in Mongabay India. The original version can be read here.