Girls were forced to work in brick kilns and farms during lockdown. Educated youth have helped them quit so they can learn, and teach younger ones 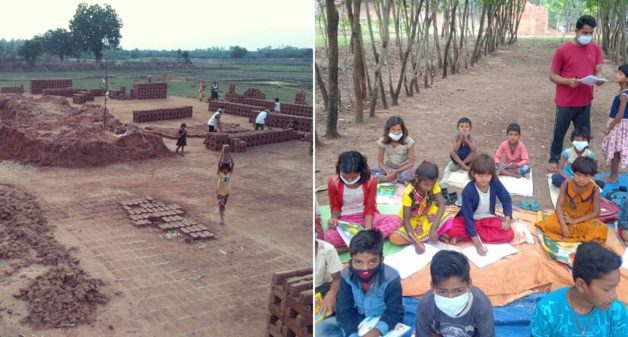 Nishu Verma (10) was sent to work at a brick kiln by her family when her school shut during the pandemic-induced lockdown last year. “There was a shortage of money and food at home,” she said. Khusbu, a class VI student, had to help her father in the field, after he lost his job and returned from Surat.

Nishu and Khusbu are typical children of Bigha village in Jharkhand’s Giridih district. Bigha has a population of around 1,500 people. Most of the children from the 50-odd households have had no access to schools during the lockdowns. Even before COVID-19 brought their education to a halt, the children had to travel 20 km to reach a high school.

“For many children from migrant and poor families, COVID-19 has exacerbated the challenges to get an education, leaving children further exposed to child labor, exploitation and domestic abuse,” said Safeena Husain, founder and executive director of Educate Girls, a non-profit organization.

“Girls were most affected when the schools closed. Some were immediately steered towards household chores and the fields. In Bigha, around 95% of the locals engage in agriculture. They struggled to get enough food during the pandemic,” said Subodh Kushwaha, a youngster from the village.

Kushwaha and five others started Prayas in Bigha last year, a teaching chain where senior students educate the juniors for free. An automobile engineer who had worked in Jamshedpur for six years, he came back to his village to prepare for competitive exams. The founding team includes Vikash Krishn Mandal, an engineer and Tejlal Verma, a teacher.

In May 2020, Prayas asked the parents in Bigha to send their children for lessons at a common field. Nearly 20 students turned up. A year later, Prayas has 100 volunteers who teach or support the initiative in different ways. The number of students stands at 300, 45% of whom are girls.

Given this opportunity, Kushbu, Nishu and dozens like them have quit their labor jobs to study. “I can now add and subtract numbers and introduce myself in English. Earlier, I could not even write my name,” said Nishu. “I can now speak in front of an audience. I also teach two juniors and I love it,” said Khusbu.

The students gather at Shivaji Maidan in the village for their lessons. Nestled amid trees, there is enough shade for classes and the right amount of sunlight filters through. Those studying between classes I and V are taught from 6 am to 8 am, and the rest between 9 am and noon.

Apart from the regular classes, one can also spot children performing yoga or playing various sports. “These activities were necessary to create an ambience of school,” said Vikas Krishan Mandal, one of the founding members of Prayas.

“The girls are more active and intelligent,” Kushwaha quipped. They were ecstatic when Kushwaha opened a library in his house. It has 500 books apart from magazines and newspapers. Observing their interest, he handed over the library’s administration to the girls. “They are responsible, so they were given charge. They issue books and look at the overall operations,” he said.

Computers turned out to be a veritable tool of persuasion in Bigha, where families cannot even think of a mobile phone and internet considering they are starving for food, according to Kushwaha. Manisha Verma, a class VIII student who is taking lessons through Prayas, said she had no access to technology. The school where she was enrolled did not conduct online classes during lockdown.

“Prayas had computers. I wanted to learn, so I decided to join,” she said. “The education here has made me confident. I can speak my mind today. Had Prayas not intervened on time, I would have been stuck with household chores.”

Manisha’s father, Ramesh Verma, brimmed with pride as he looked at his daughter confidently teaching the younger children. “Her reading aptitude was average before. Today, she scores well on her tests and speaks English. I will work hard and earn money so that my daughter can continue her education,” he said.

The efforts by Prayas have received praise from the villagers, who help out with the tasks sometimes. Kshatrapati Mandal, a member of Manikabad gram panchayat said, “Prayas has changed the atmosphere of the village. These youngsters, who have been teaching since 2020, have imbued hope for children, especially the girls, who missed their classes.”

The encouragement has boosted their ambition. The founding members of Prayas that include Aditya Kumar Verma and Devnandan Verma, want this to be more than education. They want every child to be responsible towards society, and help those weaker than them. “Prayas is thus creating an army which will educate children and also teach them to fight for the right to education,” Kushwaha said.

Safeena Husain of Educate Girls said, “With literacy affected during the pandemic for over a year, innovative initiatives like Prayas’, is a silver lining for those without access to the internet and smart phones. For many poor children, this is the first time they are getting access to education as it is now available in their localities.”

The team plans to expand the concept to nearby villages. They have been reaching out to children and parents. They are also in touch with some schools and teachers to collaborate with to make the program stronger.

S Sharma is a Patna-based journalist. Views are personal.