Villagers in the backwaters of Kerala are used to floods. But as homes become inundated by water throughout the year, many are fleeing 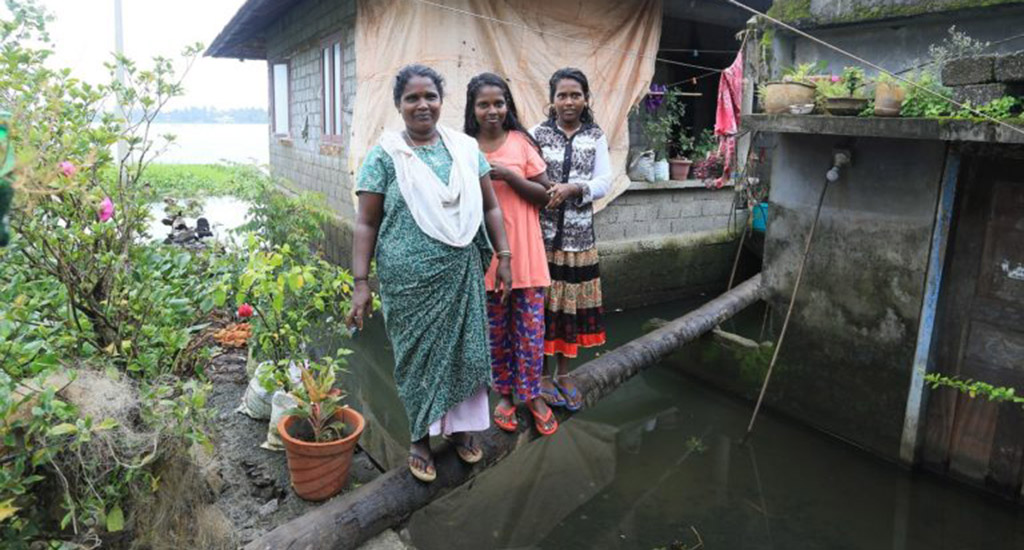 In the heart of Kerala’s backwaters Kuttanad is picture perfect with its maze of palm-fringed canals and emerald islets. Both fishing boats and luxury houseboats dot the water, while cottages and local cafes dot the islands. More than two meters below sea level, Kuttand is also known as the “rice bowl of Kerala” thanks to its once abundant paddy cultivation.

But the area, in the middle of the Alappuzha district, which once attracted farmers from far and wide is now witnessing an exodus, as many poorer villagers are unable to withstand the effects of climate change and poorly planned development.

“How can you cook and eat in a kitchen filled with water?” asks Santhosh Eruthiyel, who left Kuttamangalam Island in 2018 after battling a decade of annual floods.  “Nights are fearful as water can enter anytime without warning.”

Vembanad Lake and its surrounding rivers, which were once icons of prosperity, are now a threat to the lives and livelihood of people. According to the state government’s estimate, over 6,000 families of Kuttanad have abandoned their houses and properties in the last two years.

Those who can, leave

Most people in Kuttanad agree that flooding was a part of their life for centuries. They knew how to live with water all around them, even during heavy monsoons. But after the devastating floods of 2018, the character and after-effects of rains and floods have started changing and Kuttanad has seen more frequent and more devastating floods.

“After 2018, I couldn’t sleep on rainy days. I would sit guard checking the water level. During one such night in 2020, the water level increased suddenly and we fled. We couldn’t take anything. Not even a stone of my house is left,” says B Asokan, who now lives in Muhamma.

Eruthiyel, who is nostalgic about his abandoned house in Kainakary, says those who can, leave. He bought land 30 miles away and moved his family into a home that has no waterlogging problem.

But it is not so easy for Vinodini Raju, who lives with her husband and two school-going daughters in the drenched Kanakaseri Island. She and her family cannot abandon their house, which was built using bank loans. Yet most of house, including the kitchen and toilet, remain inundated with water for over seven months a year.

This is the same for Shyja and her husband Jyothish of Meenappulli, whose house is almost fully inundated. The COVID-19 pandemic has made matters even worse for Jyothish, who worked as a cook in a houseboat, and was laid off after the lockdowns halted tourism.

Authorities recognize this exodus and are developing plans to try and prevent the heavy flooding.  “The poor have nowhere to go, and suffer frequent flooding. The government is now evolving strategies to prevent flooding in Kuttanad, but that may take time,” says local government official (taluk officer), T I Vijayasenan.

Climate change is seen as the main culprit. But many residents blame poorly planned infrastructure and rapid development of the area, much of which is reclaimed land that is supported by fragile dikes.

“We have become climate refugees. We are losing our land,” says P B Vijimon, who recently bought land and is constructing a house some 40 kilometers away. “In addition to climate change, unscientific construction of large-scale tourism resorts, roads, bridges and other infrastructure have contributed to the present grim situation. Lack of river management and backwater protection are making the situation worse.”

P Prasad, a Cherthala-based real estate broker, says he has been receiving numerous inquiries from people of Kuttanad who have no option other than relocation.

Now, the heavy rains and resultant floods are impacting livelihoods as well. Last year, farmers didn’t earn anything from their paddy crop since the bunds collapsed. However, those who leased paddy lands had to pay the landowners.

Farmers and experts say that the land areas in Kuttanad are fast sinking, and even ripples created by moving boats cause water to enter the houses. Local people say more families would be forced to migrate in the coming months as the government has done nothing to restore the ecology of Kuttanad and make it flood-free.

“Kuttanad is a victim of misplaced and impractical developmental schemes. The backwaters themselves are vanishing due to climate change and human interventions. The government must evolve strategies that can involve the spirit of human coexistence with water and low-lying areas,” says K G Padmakumar, director of Kuttanad-based International Research and Training Centre for Below Sea Level Farming.

K A Shaji is a journalist base at Thiruvananthapuram. Views are personal.