Smoking out honeybees hurts the bees, biodiversity and the taste of honey. So it’s no wonder a more sustainable method is catching on and increasing earnings 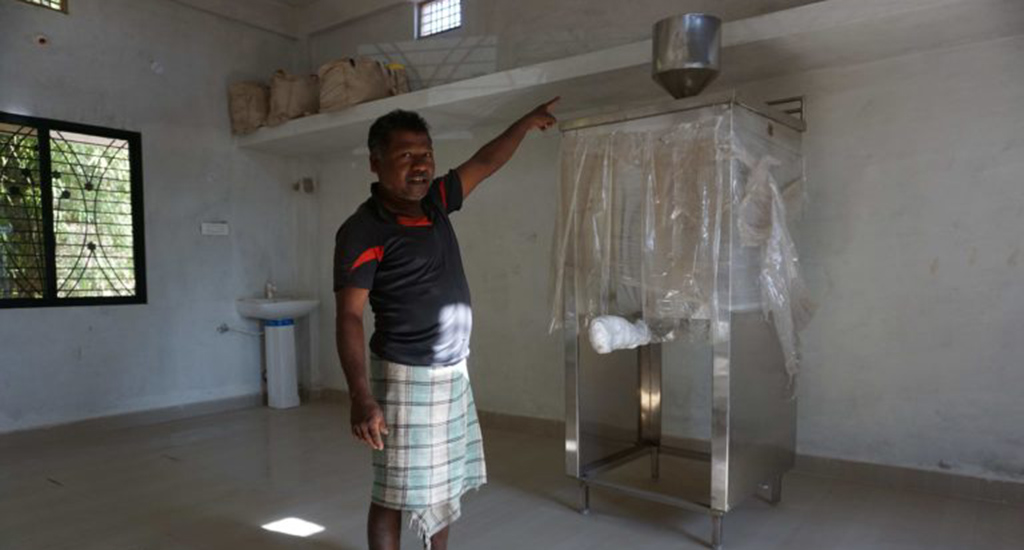 For decades tribal families living in northeastern Maharashtra have collected honey from the dense forest that surrounds them, by smoking the bees out from their honeycombs. But these small fires often killed the bees, never mind destroying the lush plants on which they fed.

Not only did this have a harmful impact on the local biodiversity, but it decreased the quality of honey, which in turn meant the families would not get good returns for their effort. Until Gopal Paliwal introduced a honey extraction technique to tribal families in Gadchiroli district that is helping end this vicious cycle.

“The number of honeycombs has come down by almost 45% since World War II, due to various factors, such as environmental changes, urbanization, human interference, besides use of pesticides and insecticides. Our technique lets us take out honey without disturbing the comb, honeybees or larvae,” said Paliwal.

His honey extraction kit is a mix of simple items and tools, including protective suits for the honey collector, a bucket, colander, plastic boxes, knives and rope. A person wearing the specialized suit climbs a tree and carefully cuts out about 20% of the honeycomb that stores the honey. The rest is left intact. Over the next 15 to 20 days the gap is filled by the bees again, allowing another round of honey extraction. The raw honey is slightly heated to remove moisture, and then bottled and sold.

“We market our honey as ‘non-violent’ honey. Sustainably extracted honey helps protect the environment and ensures a sustained source of revenue in rural areas,” Paliwal said. “Villagers see benefits in the new technique. The most important part is they are getting fair remuneration. We expect more people from tribal areas to get involved.”

Chandersai Katenge is part of a group that received a honey extraction kit. The group earned Rs 50,000 over 15 days of work this year. “Earlier, we used fire to scare the bees away and pull the entire honeycomb down. With this new technique, we just remove a part of it. The special dress protects us from stinging bees. It is not bad to earn Rs 50,000 in just 15 days,” said Katenge.

Katenge is not the only one. Many NGOs and community groups have adopted this new method, which has also helped the villagers get organized and find the best market for their honey.  Many villagers said they were often at the mercy of local traders who would trick them and deny fair remuneration.

“Sometimes traders would pay us just Rs 80-90 for a kg. Now, it is quite satisfying to see that our own people are buying our honey and other forest produce. The remuneration is good, sometimes higher than the standard market rate,” said Chamru Hodi, a resident of Salhe village in Chhattisgarh, which borders Gadchiroli district.

Satish Gogulwar, a health and social activist from Gadchiroli, sees the market growing. “Even after paying Rs 200 per kg to collectors, the sustainably extracted honey after slight purification and packaging can fetch Rs 400 or more in retail. The demand for pure forest honey is growing. As per our estimation, Gadchiroli district alone has an annual potential of 1,000 quintal honey,” he said.

Often the profit from the honey is being used for improving the infrastructure of villages and creating more employment opportunities. So it’s no wonder that people from neighboring areas want to know about the new honey extraction technique and where they could get the kits.

“It’s a great initiative since it empowers the villagers and also prevents the destruction of an already dwindling number of honeycombs,” said Ravi Chunarkar, who is working with the Tata Institute of Social Sciences on a forest governance and sustainable livelihood project.

Fruits of the forest

Honey is not the only ‘fruit of the forest’ getting attention. The area is rich in wild fruits and vegetables, from staples to minor forest produce (MFP) that are growing in popularity among urbanites. For example, efforts are on to process the oil extracted from the fruits of mahua (Madhuca longifolia). This oil can be used for dietary consumption, medicinal purposes and even for manufacturing toilet soaps.

These MFPs can help the villagers create another sustainable source of revenue, create local employment opportunities as well as facilitate self-governance through rightful access to natural resources under the Panchayats (Extension to Scheduled Areas) Act, 1996 and Forest Rights Act, 2006.

Many activists, non-profit organizations and researchers are working on plans to boost the local economy through sustainable harvest of MFPs, so the locals don’t leave in search of better livelihoods and the forests aren’t destroyed to make way for industries.

“Like honey, there are many products in the surrounding forest. But setting up processing units and linkages to markets is a challenge. Our experiment with honey extraction however has shown that gram sabhas (villagers) can become self-dependent through sustainable use of forest produce,” Gogulwar said.

Saurabh Katkurwar is an independent journalist based at Nagpur. Views are personal.