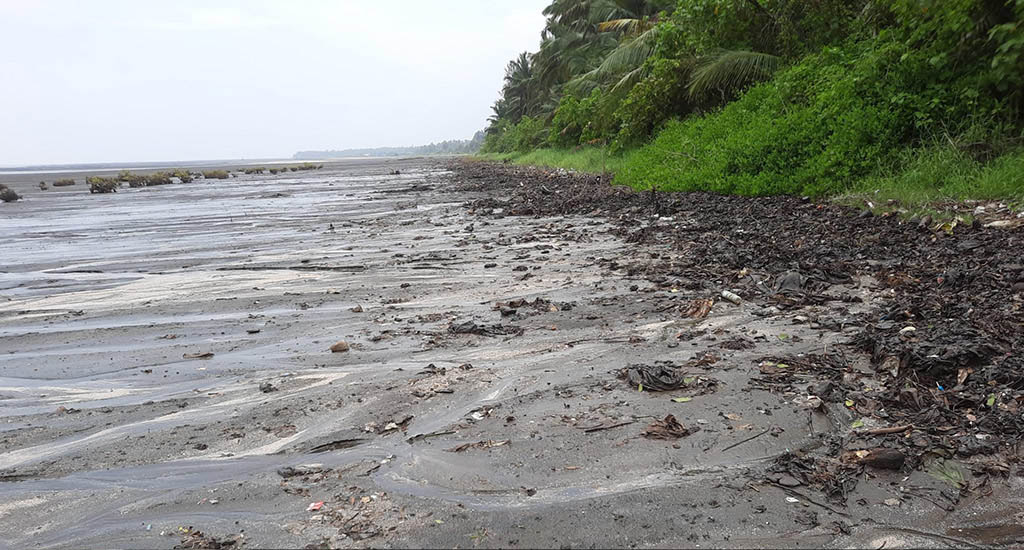 Purnima Meher walked with a heavy heart towards the oil-coated mangroves of her village Mahim, north of Mumbai, carefully dodging big black lumps on the sand as she went. She has never seen the trees in such poor condition.

But Cyclone Tauktae created havoc along the coast of Maharashtra in May when a cargo barge, called the Gal Constructor, became stranded in Wadarai, a rocky part of the Mahim coast. It was not long before the rocks dug in to the barge, leading to a disastrous oil spill.

Large quantities of tar balls were deposited along the shore. Most are still there now, hurting the lush mangroves the area is known for.

Mahim’s sandy beach, rocky outcrops and mangroves make it a unique ecosystem. Usually during monsoon the mangroves flower and drop their seeds. It is a critical reproduction season, as oysters, bivalves, intertidal marine biodiversity and fishes lay eggs.

The impact of the cyclone, clubbed with the oil spill and tar balls, is hurting this ecosystem. The lack of a contingency plan is also delaying a clean-up. And that is impacting the lives and livelihood of Mahim’s coastal community.

During the cyclone, the four-storied barge carrying 137 crew members, drifted to the coast’s intertidal area on May 18, 2021. While the crew was rescued, the barge is still stranded. The booms used for containing the oil spills also washed onto the shore and were picked up only in the first week of July when officials visited the beach for a clean-up. After a few days, more booms washed ashore.

Tar balls – the little, dark-colored, round remnants of oil spills – are not a new phenomenon.  There is often leakage from the crude oil extraction and transport systems that go up and down the coast, never mind the oil and fuel dumped by ships in the seas.

It is worse during the monsoon. The tar balls appear every year during the rains all along the western coast of India – from Gujarat, past Maharashtra and Goa, down to Karnataka.

But after Cyclone Tauktae the deposits have been larger. By late July new deposits of tar balls covered Mahim’s entire beach. No one can walk across the beach without stepping on them.

Meher and some of the local tribal women filed several complaints with the Maharashtra Pollution Control Board, Mangrove Cell and the district collectorate. Villagers drew attention to the issue by organizing a beach clean-up drive on July 4, 2021 and consecutively on the following Sundays.

But a week after the first clean-up, large quantities of tar balls washed up on the shore again. As the tar balls are exposed to the sun and rain, they melt and mix with the sea water again.

Where there are mangroves, the melted oil settles on the trees during high tides and poses a great threat to the marine ecosystem. Small mangroves on the coast have died and new saplings were found buried under the tar balls.

Fisher folk at risk too, but no one held accountable

Making their way through the tar balls, the fisher folk go to the sea, hoping to find a good catch for their family and earn some money. But the stranded barge is close to their navigation route.

Now that the fishing season has started, the boats will venture into the sea from the Wadarai jetty. The proximity of the barge is a risk for the boats. “We have written to various authorities and we hope they will remove the barge soon,” said Manendra Arekar, chairman of a local fishers’ society.

Though 24 government officials came for the first clean-up, they have not been able to hold the barge operators or owners accountable.  Since the accident took place, little has been done by the government. There is no effort to trace the origin of the tar balls and stop them at source.

The lack of action can be attributed to the lack of a policy or an oil spill contingency plan, though Maharashtra had intended to make such a plan in 2011. Such a plan plays an important role in defining the responsibilities of various departments during oil spills on the shore or in intertidal areas.

In the Dakshin Kannada district of Karnataka and Goa there are oil spill contingency plans that clearly define actions to be taken in case of an oil spill or on the occurrence of tar balls. However, no such contingency and management plans were found online for Palghar district or for Maharashtra.

For Meher it’s the denial of such disasters and the lack of a plan that hurts the most.  “The lack of scientific study, policy and (the) delay in recognizing the loss of marine biodiversity (and) the source of villagers’ nutrition and livelihoods is (an) injustice,” she says.

Dhwani Shah is an independent environmental researcher. Views are personal.

This first appeared in Mongabay India. The original story can be read here.