There’s a mismatch between aspirations and reality in rural India

Girls in Palghar are breaking entrenched stereotypes to continue their education

A walk of 7 km everyday across hilly terrain and fast streams, no food for the entire day, the additional burden of household chores — a few girls in the Western Ghats are fighting all odds to complete their education 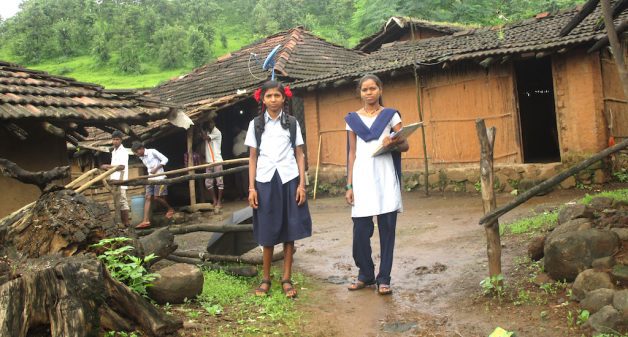 Sarita and Sunita are ready to begin their journey to school at 10 am. (Photo by Nidhi Jamwal)

Nestled in the hills of Western Ghats, Bhetwadi is a small village of 65 Warli adivasi families in Mokhada taluka of Palghar in Maharashtra. Palghar, an adivasi district, was carved out of Thane district in August 2014. Bhetwadi has a zilla parishad (district council) school till standard IV where about 40 children of the hamlet study. But, the nearest secondary school is 10-12 km away in Adoshi village, which is accessible through a serpentine road cutting across the eastern slopes of the Sahyadri mountain range.

Like Bhetwadi, all the other villages in Mokhada taluka have a primary zilla parishad school, but higher education is a challenge, as secondary schools are located at long distances. “There is no mode of transport and children have to daily walk 8-10 km in order to complete their schooling. Several students, especially young girls, drop out of school after completing their primary education,” informs Balchandra Salve, project coordinator, education, of Aroehan, a non-profit working in Jawhar and Mokhada talukas of Palghar.

Two young girls from Bhetwadi, 15-year-old Sunita Panduranga Dhangar and 17-year-old Sarita Laxman Kharpade, are, however, breaking the stereotype as they daily walk 3.5 km to their school — Rajashri Shahu Maharaj Primary and Secondary Ashram Shala — in Adoshi. On their way, they wade through streams, climb hills and walk through muddy fields and deserted farmland to reach their school. After attending the ashram shala for six hours, they undertake the same journey on foot to return home after six in the evening.

Ashram shala are boarding schools for adivasi children in Maharashtra. A large number of these schools are run by private trusts with some financial support from the government. Sunita and Sarita’s school, run by Satara-based Rayat Shikshan Sanstha, has 560 residential adivasi students, mostly boys, says Hanumant Mahadev Lahare, headmaster of the school.

Sarita’s day starts early in the morning when she wakes up at 5 am. She has five hours before she leaves for the school and in this time she mops the house, cleans kitchen utensils, makes tea and breakfast for the family of six, and finishes other household chores. If she has time, she also prepares the lunch, which is otherwise managed by her mother-in-law and elder sister-in-law. She stays up till 10 in the night to study. 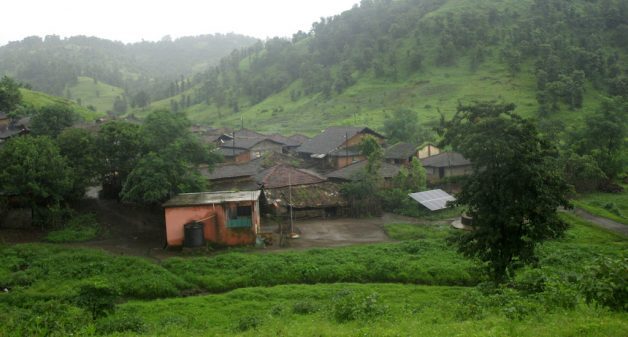 The Bhetwadi village in Dhamanset panchayat of Mokhada, a tribal taluka in Palghar district, about 170 km from Mumbai. (Photo by Nidhi Jamwal)

Sarita, all of 17, got married to Ramdas on March 25 this year. “I wanted to complete my studies (12th standard) before getting married, but my parents thought I was getting a good proposal from a well-off family within Bhetwadi village,” says Sarita, whose husband drives a Bolero and father-in-law is employed with MTNL in Mumbai. The family also owns 11 acres of land, which is managed by Sarita’s mother-in-law, Manjula Ganga Mirki. Though Mirki is happy with Sarita’s studies, she isn’t too happy about the distance her young daughter-in-law has to cover daily on foot to reach the school.

“Sarita leaves home at 10 in the morning and returns only post six in the evening. The school is very far and during the rains, we are extremely worried as the river is in full spate. I don’t rest till she returns home safely,” says Mirki.

Mokhada receives an annual rainfall of 2,500 mm, but due to the hilly terrain and basalt formation, the rainwater does not seep into the ground. It flows away in high speed as streams to join a seasonal river (a tributary of the Pinjal River) in Adoshi village, which Sarita and Sunita daily cross on their way to the school. These streams and the seasonal river go dry post monsoon because of which Mokhada faces acute drinking water crisis.

Till two years ago, the only way to cross the river at Adoshi village was to swim across it. In 2014, Aroehan raised funds through a philanthropic initiative of Mumbai-based EdelGive Foundation to construct a check dam across the river, which is now used by the villagers and students like Sarita to safely cross the river.

In her desire to complete her schooling, 15-year-old Sunita has changed three schools. She belongs to Dhopada village of Jawhar taluka, but is at present living with her elder sister’s family in Bhetwadi village of Mokhada to complete her education. 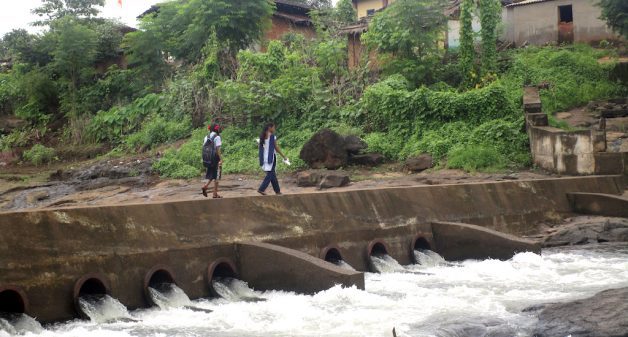 The girls have to cross a river every day, which earlier they had to wade through. (Photo by Nidhi Jamwal)

“At my native village Dhopada, the zilla parishad school is till 7th standard. For my class 8th, I moved to a school in Kosimset. And, this year, I moved in with my sister to study at Adoshi ashram shala which is till class12th,” says Sunita, who misses her parents, but also looks forward to attending the school. “I enjoy with my school friends. We play kabaddi, kho-kho, carrom and skipping rope. I also learn new things in science and history,” she adds.

Apart from Sunita and Sarita, there are six more boys from Bhetwadi who walk to the Adoshi ashram shala. But the girls prefer walking on their own to the school.

On August 31, this reporter joined Sunita and Sarita at their village in Bhetwadi and walked with them to their school at Adoshi. By road, the school is over 10-12 km away. But, these girls have found a 3.5 km shortcut to reach their school. Since Mokhada is in the hilly terrain of Sahyadri, the shortcut from Bhetwadi to Adoshi isn’t really a short-cut, as these girls have to climb up and down hillocks and cross muddy fields and streams to reach their school.

Before leaving home, both the girls eat dal-rice at home, as their next meal is straight dinner. “At school, food is served to the students at 10 in the morning and two in the afternoon. The morning meal is for residential students only. At 2 pm, we are served snacks of poha or usal, which we do not like. We eat only after returning home at 6 pm,” says Sarita. They claim they don’t find it hard to walk 7 km every day and stay hungry most of the day.

The shortcut to school is deserted as not many villagers use that path. When this reporter asked if they feel scared, both the girls thought hard and remembered an incident when they had spotted a poisonous snake on way to the school.

By next year, Sarita will complete her 12th standard and then Sunita will have to walk alone to the school. Isn’t she worried? “Sometimes Sarita is sick or has a family commitment and cannot come to the school, so I go alone. I am not scared. I want to become a sister [nurse] at a hospital,” says Sunita.