There’s a mismatch between aspirations and reality in rural India

Kuthambakkam charts a course to prosperity through community action 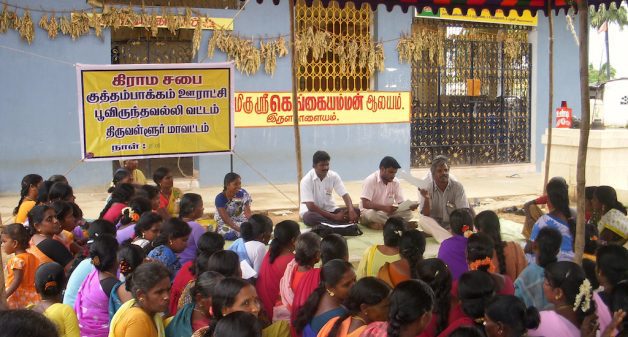 Squeals of delightful laughter ring through the air as little children play in front of their houses against the soft light of the setting sun. Women taking in laundered clothes, fetching water and pausing for a chat amidst the flowering plants in their clean, small yards paint a pleasant picture of peaceful village life. It is hard to believe that this village was riddled with illicit liquor vending, poverty, unemployment, poor sanitation and caste clashes not too long ago.

A village leader and a gram sabha (village council) that supported him have effected the transformation of Kuthambakkam village, about 50km from Chennai. The tool that helped them achieve such transformation is the Panchayati Raj system.

Elango, a native of Kuthambakkam and the first one to be a college graduate from the village, observed the problems of his village right from his school days. He hoped that someone would set things right. The small initiatives that he took lost steam when he got a government job. But questions such as who will solve Kuthambakkam’s problems kept popping up. When he realised that the transformation had to come from within, the Indian government introduced Panchayati Raj system in 1992 through a constitutional amendment.

In 1996, panchayat elections were announced and Kuthambakkam was reserved for a candidate from the Dalit (oppressed) community. Elango decided to quit his job as an engineer and took a political plunge.

Elango’s first task on winning the election as an independent candidate was gaining the support of those who did not belong to the Dalit community, who make up 48% of Kuthambakkam’s population.

Some recall the brash young man in his early twenties who tried to transform the community. The two-tumbler system (separate glasses for dalits and non-dalits) was in practice in the lone teashop run by an upper caste person. Questioning this, Elango and a group of youth had led a protest. Though this had happened more than a decade ago, the villagers had not forgotten the incident. 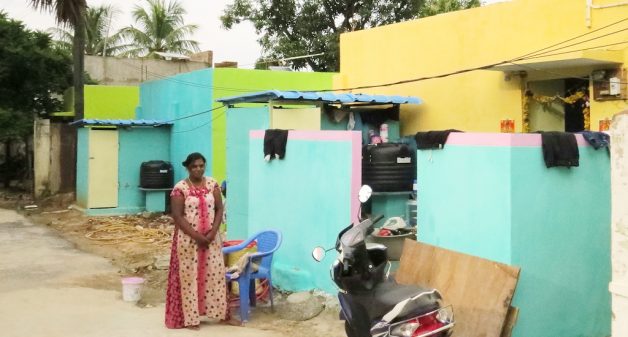 Houses in the village have been renovated after the floods. They are now powered by solar panels and have new toilets. (Photo by Jency Samuel)

Learning of their victory, Elango and his supporters came to the centre of the village where the non-Dalits lived. The doors and windows of all the houses were shut. The place was eerily quiet and no one ventured out, fearing a backlash. Elango knocked on one elder’s door. He convinced the elder that he meant no harm and that he would work for the village without discriminating. The non-Dalits held a meeting and offered their support.

After preparing a development blueprint for the village, Elango consulted the villagers on every aspect. The gram sabha validated his proposals and decided to prioritise the work. Elango would later understand the strength of the participatory approach.

The South Colony, where about 500 Dalit families lived, needed immediate attention. “With open defecation, sewage flowing down the streets and pigs wallowing in the muck, sanitation was extremely bad,” recalls G. Selvi, a resident. Though the financial outlay was a big chunk in the available fund, the villagers stood united in deciding to construct drains and lay roads. Some offered machinery to excavate and transport earth or offered financial contributions. The facelift brought about a change in the residents’ attitude. The South Colony men, known for being uncivil, were no longer insolent and started participating in gram sabha meetings.

“We had to go past the colony for everything and we were subjected to eve-teasing and humiliation. But all that suddenly changed,” says Ramya from the central part of the village. The societal disparity vanished and Elango became anna (elder brother) to everyone.

When Elango challenged the colony men to return the favour and support the works in the central part, they agreed. Within a year, the caste clashes completely stopped. “Casteism cannot be eradicated. The strategy is to replace caste-based ignominy by dignity,” he avers. 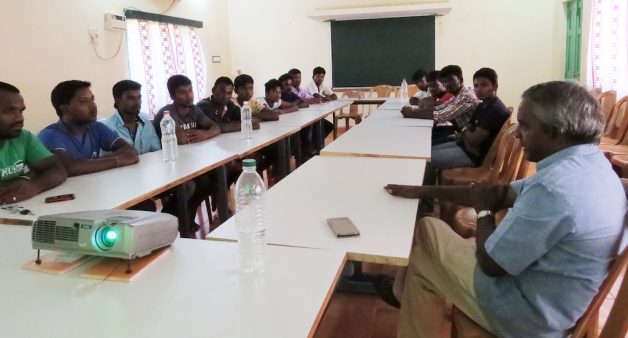 Suggestions of the village youth in Kuthambakkam are given importance before taking any decision. (Photo by Jency Samuel)

Focussing on the children and women was his two-pronged strategy. He improved the infrastructure of schools. “He visited every house and persuaded the children to go to school. He provided them with books, bags or whatever was lacking,” says Selvi. Elango encouraged women to form self-help groups (SHGs) and save money. As a means to savings, he provided employment opportunities. Panchayat works that could be done by women were given to the SHGs. The empowered women and children had an impact on the men.

With the help of bureaucracy guided by the then state home secretary Santha Sheela Nair and police, Elango’s team was able to stop illicit brewing. But that left the men with no livelihood. This was solved by forming men’s SHGs. They were given work such as de-silting and deepening of ponds that the panchayat had to execute.

Though the strategy brought desired results, it was a procedural violation as panchayat works had to be awarded through a tender process. Citing this, Elango was suspended.

To add to the woes, he fell sick. It was at this point that his wife Sumathi, who supported him by shouldering family responsibilities, introduced him to the life and works of Mahatma Gandhi. “I was a radical. She gave me Gandhi’s biography. Knowing my lack of patience, she marked the portions that I should read. She reasoned that slowing down is not giving up,” he now recalls. Gandhi mellowed him and Elango was ready to face challenges.

A vernacular daily challenged the government on the suspension, forcing a response. As the district collector questioned the gram sabha, they confirmed that the projects were executed with their approval. Elango was reinstated.

“When we assigned panchayat works to the villagers, economically weak non-Dalits also sought to work. The North Colony dalits lived in tiny shacks. When I proposed constructing houses for them in available panchayat land, the non-Dalit poor voiced their need for houses,” said Elango. As the land was in the dalit colony, the panchayat offered houses to non-dalits if they were willing to live there. Having worked together peacefully, the non-dalits decided they could live together peacefully.

This proposal was approved by the then Chief Minister M. Karunanidhi after initial apprehension. He named the colony Samathuvapuram (Parity Township in Tamil). Its success prompted the government to start similar tenements in each district. Cost-effective products such as cement-stabilised mud blocks made by the villagers were used. The colony has an equal number of Dalits and non-Dalits. M. Santhi credits Elango with replacing all the thatched roof shacks.

Soon the SHGs were making hammocks, incense sticks, first-aid kits, soaps and extracting oil from coconuts and peanuts. The village economy thrived. Lacking direction when Elango fell severely ill, things slowed down. After recuperation, Elango continues to serve Kuthambakkam through a trust he has founded though he is no longer the president of the village council.

Using precast rings for septic tanks and slabs for walls, he builds cost-effective toilets for villagers. He renovated houses damaged during the 2015 floods. His enthusiasm has caught on and a group of youth who came to meet him aver that they would emulate him.

Kuthambakkam has the privilege of being one of 10 villages and the only one from India that was featured in a documentary screened at the Paris Climate Summit in December 2015. Kuthambakkam is now hailed as a model village for its transformation.