Kuthambakkam charts a course to prosperity through community action 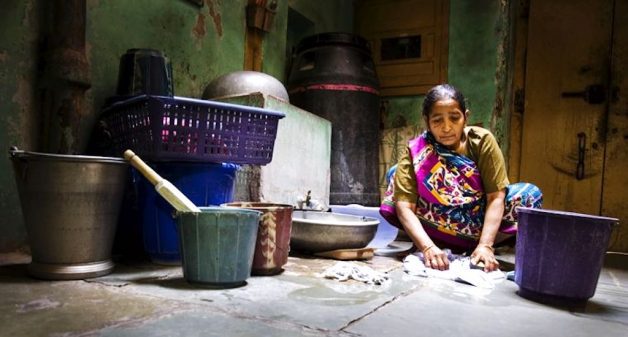 Drudgery is compounded by stigma for migrant women workers. (Photo by Bharat Patel)

In Gumla, Simdega and Khoonti districts in Jharkhand, young women and girls who migrate to for employment as domestic workers do not speak openly of their experience of migration. “When men come back, they relax and enjoy themselves. Community members ask what they did and bought and what movies they saw. Women are never asked these questions,” says Saachi Kumari, secretary of Ranchi-based Chotanagpur Sanskritik Sangh, a non-profit, human rights organizationsexyxxxsexyxxxsexyxxxsexyxxx.cc.

Despite their role of fulfilling family financial responsibilities, women who migrate for work face stigmatization at home and in their communities. After they return from urban destinations like the National Capital Region, they are often stereotyped as Delhi-returned, a label that is loaded with such a negative connotation that it makes it difficult for them to find good husbands.

Although it is true that some migrant women start having an increased say in family decision-making because of their economic contributions, there are many others whose contributions are quickly absorbed but largely unacknowledged. Efforts to mask economic contributions from women may reflect either shame that a woman from the family has departed from traditional gender-circumscribed roles within the household or from a reluctance to recognize a family’s dependence upon a woman’s earnings.

The patterns of stigmatization associated with a woman’s mobility reflect cultural and ideological approaches that aim to restrict a woman’s mobility, confine them to narrow roles within the household, control their sexuality and stigmatize those who work outside of their homes. Despite significant shifts in international standards, transnational anti-trafficking discourses reinforce familial and social restrictions on women’s mobility. Directing near-exclusive attention to sex trafficking, dominant anti-trafficking actors obfuscate other forms of labour trafficking that are rife with abuse.

The impact of social stigmatization upon a woman’s ability to protect her rights can be profound. Migrant women report that the stigma associated with migration may lead them to hide their experiences and forego efforts to pursue accountability in cases of workplace and transit-related abuse.

The erasure of experiences and contributions of migrant women collides with the reality that a rapidly increasing number of women in India are emerging as mobile economic actors. As employment in agricultural sectors has declined over the past two decades, migration — particularly women’s migration — from rural to urban areas has increased many times. Increasing flows of remittances from women workers to rural and urban areas across the country are transforming women’s lives and the lives of their families and communities. “When my husband stopped earning, I took an instant decision to come to Delhi,” Mamta from Balaghat district of Madhya Pradesh explained. “After a year, I brought my husband and my child to live with me here in Sikanderpur (a neighbourhood in Gurgaon on the outskirts of Delhi).”

There are many factors that compel women to migrate for employment, both within India and internationally. In addition to aspirations for better economic futures, significant push factors may include conflict-related displacement, development-driven displacement, agricultural decline, natural resource erosion, natural disasters and household-level economic distress. Due to explosive development of urban economic hubs beginning in the mid-1980s and an imbalance in economic growth between rural and urban areas, migrants pushed to relocate in search of livelihood and security frequently travel to urban hubs and megacities including Delhi, Mumbai and Kolkata. 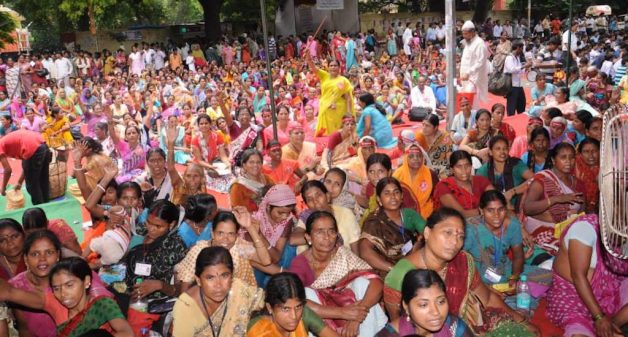 A protest rally of domestic workers. (Photo by National Platform for Domestic Workers)

Contributions like Mamta’s, however, are hard won. After arriving at an urban destination, migrant women from vulnerable communities find employment in low wage, unorganized and unprotected work, a term used to describe the range of workplaces in the unorganized sector where their labour is undervalued, underpaid and invisible. Unprotected workers may be engaged in employment without proof of employment, either through company rolls or formal employment contracts. Undervaluation of women’s work in the paid economy exacerbates the already precarious nature of women’s employment.

Caste, social and community identities have significant bearing on migration patterns, pathways and the risks migrant women are willing to take. Women from more vulnerable tribal and caste communities are more likely to migrate for employment as domestic workers. Migrant women traveling in search of employment tend to be from some of the poorest, most marginalized castes and social groups in South Asia. As a result, they confront multiple and intersecting axes of discrimination and violence. These include, but are not limited to, discrimination on the basis of gender, caste, religious and tribal identity, marital status, sexual identity, class and disability.

Migrant women workers from socially and economically more vulnerable communities are also more likely to fall prey to exploitation by recruitment intermediaries, traffickers and abusive employers. These women have comparatively fewer options for employment and may therefore be willing to take more significant risks to meet their personal and family needs. They may also have fewer networks and less information to guide them in their migration processes.

From October 17-20, the UN Habitat III global summit on housing and sustainable urban development will convene in Quito, Ecuador, to launch the New Urban Agenda — a global strategy around urbanization that will guide global strategy around urbanization for the next two decades. Like the UN Sustainable Development Goals, the New Urban Agenda has the potential to inform programmatic and funding priorities for years to come.

Article 5 of the New Urban Agenda commits to “promote sustained, inclusive, and sustainable economic growth [and] achieve gender equality and the empowerment of all women and girls, in order to fully harness their vital contribution to sustainable development.” Within India, gender inclusive economic growth, committed to harnessing the vital contributions of women and girls, requires us to interrogate ideological discourses that restrict women’s mobility and stigmatize women who work outside the home.

Shikha Silliman Bhattacharjee is a human rights lawyer. She is Senior Research Associate at Society for Labour and Development, a New Delhi-based non-profit, and Content Director at HELM Social Design Studio. She is concurrently Research Associate for the Political Conflict, Gender and People’s Rights Project of the University of California at Berkeley while pursuing her doctoral work in Jurisprudence and Social Policy.

Shikha Silliman Bhattacharjee is a human rights lawyer. She is Senior Research Associate at Society for Labour and Development, a New Delhi-based non-profit, and Content Director at HELM Social Design Studio. She is concurrently Research Associate for the Political Conflict, Gender and People’s Rights Project of the University of California at Berkeley while pursuing her doctoral work in Jurisprudence and Social Policy.