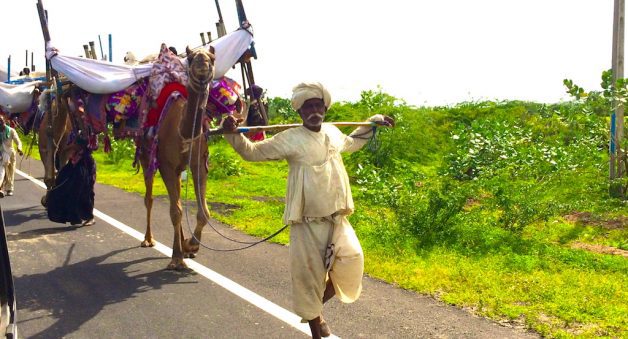 Rabaris move with their camels and belongings on the edge of a highway in Kachchh.

Ranabhai Rabari has that big turban and swagger of a proud man. He carries an aluminium milk can and a plastic water container, dangling on a stick that he rests on a woollen shawl folded over his shoulder. He coos and cackles and, far away, a few camels raise their heads behind bushes and patches of mangroves.

Two camels come forward, walking against the backdrop of four giant smokestacks and an open-air conveyor belt carrying coal that winds its way from a port a few kilometers away. Ranabhai pats the camels, hid-ing a grin behind his handlebar mustache, and starts milking one of them.

Ranabhai’s forefathers and other nomadic pastoralists grazed their camels in the mangroves (a variety of trees and plants that grow in coastal saline or brackish water) and bushes across the Kachchh coast for over 500 years. Kings have granted them the right and the Rabaris before him paid taxes for grazing, Ranabhai says.

His generation is no longer fortunate enough to freely use these commons. He often has to walk his herd along the thin edges of fast-track highways over great distances, crossing checkpoints and fences and flash permits and his identity card to reach grazing grounds – and sometimes force his way into plantations. Frustrated, Rabaris are selling their camels.

Grasslands and mangroves are shrinking; uncertain rain makes fodder scarce. Kachchh Unt Uccherak Maldhari Sangathan (KU-UMS or Kachchh Camel Breeders Association) paints a grim picture of the grazing lands, marked by rampant encroachment, extended farming, vast expansion of industries and mines, and the spread of protected areas that are off bounds to the local people. Steel and thermal power plants have appropriated huge tracts, rendering them useless for grazing, the Sanghatan notes in their Biocultural Community Protocol, a set of rules and guidelines.

The association works to conserve camel herds and grazing resources. These nomads breed Kharai camel, a unique breed of camel from Kachchh that swims into the ocean to feed on mangroves.

Kachchh coast has the largest spread of mangroves on the west coast, covering 789 sq. km, according to the International Union for the Conservation of Nature estimates. Despite rampant destruction, Gujarat has a good record of mangrove regeneration, increasing the coverage by 15% in the past two decades in different afforestation projects by the industry, the state forest department and conservation and research agencies.

The reduction in mangroves threatens the survival of Kharai (meaning salty), a breed endemic to Gujarat that feeds mangroves, sometimes swimming two km offshore. The Kachchhi camel that feeds on bushes and trees of the inland grasslands is also on the decline. 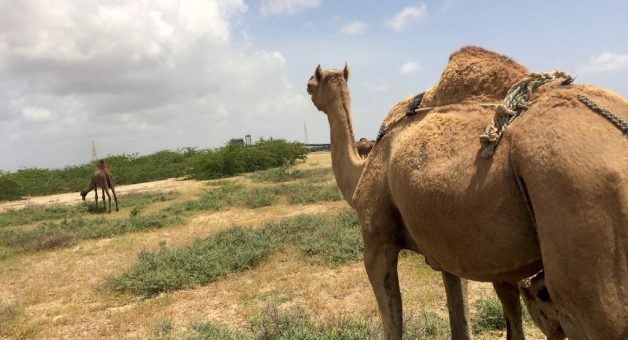 Camels often find it difficult to survive on sparse grazing grounds of Katchchh.

It was a different story when Ranabhai’s forefathers came to Tunda Vandh village in Mundra taluka, or administrative block, of Kachchh, lured by abundant mangroves. They made the place famous for its healthy, high-quality camels. Rabaris originally belonged to the deserts of Jaisalmer in Rajasthan state and, as legend has it, they moved to Gujarat to escape a king whose marriage proposal a Rabari girl and her family rejected.

Zoom out the dust and dirt, then Tunda Vandh is a series of picture postcards, dotted with mud and straw huts, where women clad in shiny black embroidered dress stitch thin quilts and make shiny beaded necklaces in rainbow hues. Boys and men move around, wearing frilled white Rabari shirts, chasing buffaloes. Buffaloes now replace camels in their business. The camel headcount dipped from 10,000 to a mere 800 over the past 40 years, say the assistant village chief Jessabhai. KUUMS estimates show much lower figures.

“We just cant get enough fodder, after a port and two thermal power plants took away much of the mangroves, and forest guards prevent entry to some other areas,” Jessabhai notes. So the families turned to buffalo rearing, even while some of them still keeping a small camel herd, a usual trend in maaldhari villages.

Camels that were in great demand once — for farming, transport and p-trolling by the Border Security Force — are less in demand now than ever before. To preserve Rabari lifestyles and livelihoods, KUUMS, along with Sahjeevan, a Bhuj-based non-profit, along with the state Directorate of Animal Husbandry Department and the milk marketing cooperative Amul are now trying to promote camel’s milk as a healthy, low-fat milk option.

Some experts, such as Kachhia Patel at the Directorate – and Rabaris in general – consider it medicinal. Patel has published testimonies of people who have cured diabetes and other illnesses by regularly consuming camel’s milk.

With their local mangrove largely out of bounds, Rabaris of Tunda Wand often take their camels to the natural mangroves on the creek of Rand Bandar (harbour), a place where fisher folk of three local villages camp in huts made of sackcloth and plastic over the fishing season from September to March.

The fisher folk welcome the Rabaris, as they say when camels eat the top foliage, mangrove plants thrive just like manicured garden plants. “Besides, camel footprints stamp mangrove seeds firmly in the mud, helping them stay and grow without being swept away by tides and waves,” says Hassan Ahmed, a veteran fisherman.

However, camels are not welcome in all fishing hamlets. “We find them a nuisance, they come and destroy young plants,” says an elderly fisherman in nearby Luni village. The villagers have planted several kilometres of fresh mangroves sponsored by an industry giant. “When we challenge them, they dare us to go to police or forest officials and complain!” the fisherman said. Ranabhai defends such tactics of occupation: “What do we do? We have to feed the camels.” He says a healthy camel could weigh up to a tonne and need 40 kg of fodder a day.

Ranabhai’s teenager son walks along the village patch, herding buffaloes. He says he wants to be like his father, though the villagers have to option to take up casual labor for the industries as his mother sometimes does. “I want to be my own malik (boss).” He walks the dirt track, his hands resting on the shepherd’s stick placed across his shoulder.

M M Paniyil is a journalist based in Bangalore.