After the failure of both the South West and North East monsoons, cardamom farmers of Idukki in Kerala are staring at massive losses

The Idukki cardamom has high demand in the international market. (Photo by Saravanakumar)

The scenario looks bleak for Mani, a small farmer cultivating cardamom in five acres of land in Kumily village Idukki in Kerala. “We were cheated by Edavapathy (South West monsoon). If the same is repeated in Tulavarsham (North East monsoon), there will distress in these hills,” he told VillageSquare.in.

The wait for North East monsoon showers may remain futile in the picturesque cardamom hills across the Western Ghats, according to predictions by the India Meteorological Centre at Thiruvanathapuram. On October 31, in an urgently called meeting by Kerala State Disaster Management Authority, the state has been declared as a draught-hit.

Cool moves away from hills

Cardamom-nourished Iduki district is supposed to be enriched by four main rivers of the state — Periyar, Pampa, Thalayar, Thodupuzhayar — and various rivulets and lakes. This year the hills have suffered a 25% dip in rainfall during the South West monsoon and an alarming 66% dip in the North East monsoon precipitation.

According to AN assessment by Sunny Martin, leader of Cardamom Growers Association Vandanmedu, this harvest will likely suffer a 65% dip in cardamom production due to adverse climate.

A journey from Kattapana to Kumily, the heart of the cardamom hills, shows a dismal picture. Once thriving cardamom plants look withered all across the area.

“We are afraid of a 1983-like disaster” anxiously asserted by K.S. Mathew, a cardamom farmer who has spent Rs 2 lakh for cultivation in this season. In 1983, while Iduki suffered the worst-ever draught, the faded cardamom hills had witnessed abrupt impoverishment and migration. 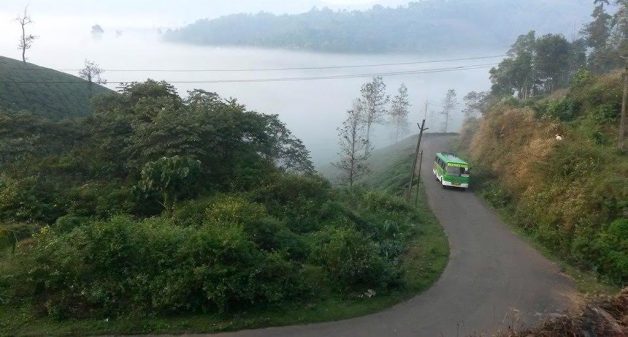 The picturesque Idukki hills in Kerala. (Photo by Anas T.K.)

Disaster hasn’t come all of a sudden. In 2013, the Kerala Bio Diversity Board predicted such a situation after it conducted a detailed field study on the impact of climate change on cardamom in Udumbanchola Taluk of Idukki district. Their report says, “The whole area is hurting towards an imminent ecological disaster, underlining the need for urgent steps to conserve the biodiversity unique to the Cardamom Hill Reserve. The grasslands and forested areas adjoining the traditional cardamom plantation have become vulnerable to logging, poaching and land grabbing.”

For a farmer, cardamom plantation is a painstaking process that usually begins in the month of May. The rainfall during the South West monsoon in June and July, pest infections and coldness are the deciding factors of the volume of harvest. Harvesting season begins in September and stretches up to the end of December. In fact, plummeting harvesting trends in October and November indicates disaster.

In Kumily, popularly known as the cardamom capital of Kerala and situated in the Periyar Tiger reserve, has suffered worst setbacks. The spices market, groceries, hardware shops, hotels, etc., have all been feeling the heat in the last year.

A small jewellery shop owned by Mathukutty, for instance, usually fetches sales of Rs 1 lakh every day. In the month of October, gold sales have been slashed by half, when it should have actually risen had there been a good harvest. “Slight variations of the cardamom production would reflect on the sale of not only gold but also all most all items,” Mathukutty told VillageSquare.in.

Idukki has been a classic example on how an environmental phenomenon triggers social distress. Many educated women across cardamom villages are desperately waiting for suitable grooms. Ayyappan, proprietor of Anugraha, a leading matrimonial bureau at Kattapana town bring forth the magnitude of the situation.

“None of the groom prefers a bride who is a daughter of a cardamom farmer unless she is economically very, very sound. A groom has no use for unproductive, debt ridden cardamom land,” Ayyappan told VillageSquare.in.

In comparison to the statistics of last year, marriage bureaus in the town have faced 50% dip in marriage-related inquiries. Most of the girls hailing from marginal or small-scale cardamom farmers’ families who are registered with the bureaus are not getting any proposals, Ayyappan says. “I will remain unmarried till I find out a groom who is not thirsty of dowry,” says Beenamol, a media student at Kumily. 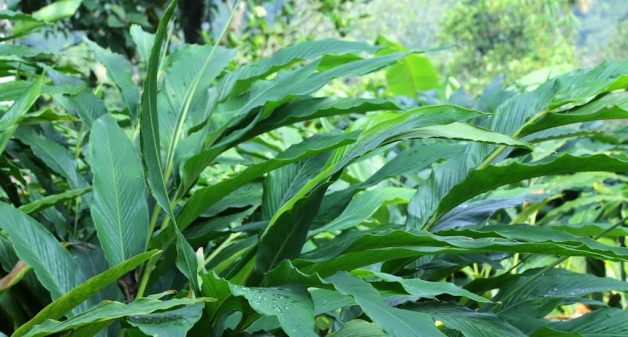 The cardamom plant. (Photo by Grishma)

In the Saudi Arabian international market, Idukki cardamom has the highest demand of $18 per kg against main competitor Guatemala cardamom at $10 per kg. However, the benefit of this high demand is not reaching the common farmer.

“We are distressed by the high growth of expenses of cardamom farming. Including labour cost and fertilizer, a farmer has to spend Rs 800 to produce 1 kg of cardamom. This amount would not be worthwhile unless we get bumper crop,” Lambodharan, convenor, Spices Planters Association, told VillageSquare.in.

As many as 23,000 farmers living in Udumbanchola, Devikulam and Peerumedu taluks of Idukki and 50,000 plantation workers depend solely on cardamom farming for livelihood. The Spices Planters Association says factors like the discontinuance of a subsidy amount Rs 75,000 per hectare for cardamom plantation and closing of field offices in Iduki have added to the crisis.

In 2011, the Western Ghats Ecology Expert Panel appointed by federal environment ministry submitted report made several recommendations. In the wake of local protests against the report, the central government deputed a new committee to balance the two concerns of development and environmental protection.

Even though the new committee suggested minimizing the amount of ecologically sensitive area (ESA) to 37% of Western Ghats from 64% suggested by the earlier report, public ire did not end. In the past two years, Idukki district has been roiled by at least 25 general strikes against the proposed regulations.

“If the recommendations are strictly implemented, almost all the inhabitants in Idukki district would have been ousted from the valley,” Father Sebastain Kochupurakkal, general convenor of non-profit High Range Protection Council, told VillageSquare.in.

The uncertainty over cardamom farming has been devastating for the district as a whole. Land sales have dwindled. Most banks are unwilling to provide loans by pledging land deeds. Inflow of tourists has declined due to sporadic strikes.

Even though most political parties are supporting the local protests over the proposed environmental rules, Kerala Shasthra Sahithya Parisath (KSSP), a well-known environmental organisation in Kerala, has been campaigning for the implementation of the guidelines. Ravindran, District secretary of KSSP is keen to connect the cardamom crisis to the recommendations of Gadgil reports

“If the recommendations are implemented, cardamom farmers would be the biggest beneficiaries,” Ravindran, district secretary of KSSP, told VillageSquare.in. “Quarry mafias, resort mafias and encroachers must be the biggest sufferers. None other than these are fuelling the ongoing agitation.”

Amid the controversies, allegations and counter-allegations, the cardamom hills of Kerala are in turmoil even as cardamom farmers wait in vain for some rain.