For all talk of sustainable farming practices than often entail increased drudgery, there is a clear trend that farmers are swayed by convenience and ease of use more than anything else 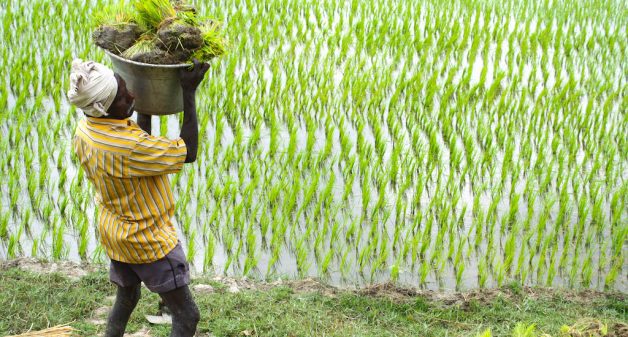 A field laborer carrying paddy transplants in Tamil Nadu. (Photo by ADM Institute for the Prevention of Postharvest Loss)

There has been increasingly insistent normative expectation that farmers adopt sustainable farming practices to maintain the land and other productive resources for future generations. While a range of practices to pursue the above laudable goal have been devised or recommended, most of them involve using bio-waste, animal waste and other organic materials as base materials for nutrient inputs and pest control mechanisms in preference to inorganic chemical inputs and pest control mechanisms.  While a lot of these survive at boutique levels, their actual adoption by a large number of stock farmers remains low.

However, it is often overlooked that most sustainable practices involve greater drudgery. Most of the farmer families seeking a comfortable life like their urban brothers wish to escape the drudgery. The progress towards the goal of sustainability will therefore remain crucially dependent upon women and those poor farmers who are content to live in the existing rural conditions.

Four specific instances help us to start thinking about the validity of the above proposition. In the far flung villages of Gaya district, women belonging to mahadalit families showed tremendous interest and enthusiasm in adopting sustainable farm practices. These practices involve manual handling and processing of unpleasant and smelly substances such as animal waste or rotting bio-waste for making products considered necessary as inputs in these sustainable practices.

When questioned if they felt comfortable in this task, some women responded that they have to live and work in the squalor dominated by such materials and hence were used to it. Interestingly the men folk among these very families did not claim that they handled or participated in making of these products. Inference? Because poor mahadalit women are willing to do the dirty work of processing smelly stuff, farms are becoming sustainable.

The second instance is from Kurnool district. The well-known government department had promoted sustainable farm practices there with great fanfare, expenditure and well-structured intervention through staff and community workers. Village after village reported giving up these practices simply because with common acceptance of tractors, animals were not reared and hence much of the basic raw materials for promoting sustainable practices was no longer easily available. Inference? Convenience of mechanization has led to reducing animal herds and this leads to stoppage of every recently taught good practices.

The third instance is the current huge problem of smog in northern India. This is attributed to a significant extent to the practice of burning of paddy residue. In East India where huge quantities of paddy are produced, harvesting is done manually and whole paddy plant is cut, threshed and then sued for either animal fodder or for thatching huts etc. One can see lovely arrangements in which the straw is stored in backyards of rural people. Stubbles of paddy plants of about 6 inches length remain in the farm and are then ploughed in during the next cycle, contributing to carbon and silicon in the soil.

In contrast, harvesters and threshers or combines used in Punjab, Haryana and Western Uttar Pradesh crush the paddy straw to powdery mass, which can be disposed conveniently only by burning. So millions of tons of this is burnt at this period of the year just before sowing wheat. And every one knows that soils in that region are depleting fast. Inference? Prosperous farmers adopt wrong type of mechanization simply because of convenience factor and adopt practices ruinous to their farms and disastrous for the urban brothers nearby.

Finally, there is an alarming adoption of the practice of spraying herbicides for controlling weeds in Bundelkhand. The region is very drought prone and even a lay observer will know that the farm soils are depleted and short in organic carbon. Yet no one appears to undertake weeding to plough the weeds back in farm. Reason? Bullocks have given place to tractors and mechanical weeding is not practiced and male labour migrates for wages thus creating a shortage of manual labour for weeding. Inference? Even in very poor economies, convenience is driving out sustainable practices.

Mind you, these are not stray observations but anyone travelling in these regions will notice these phenomena on very wide scale. We also have the long experience of how poor farmers initially accept a laborious irrigation method like treadle pumps but transit to small capacity kerosene or diesel pumps as soon as they can afford the shift.

Overall an interesting inference appears tenable and it is not very different from the international political economy arguments on this subject. Developing countries are in general claiming that global climate resilience and sustainability is coming largely at their expense as they are required to hold on to or cut back from current levels of emissions. Here too we see that it is only the very small and marginal people and women who meaningfully contribute to sustainable farm practices but larger and prosperous farmers are happily doing all the wrong things and exacerbating the problem for themselves as others. Are there ways out which combine sustainability with convenience and without drudgery or unpleasant chores? If there are none, work will be needed to see how these aspects can be combined.