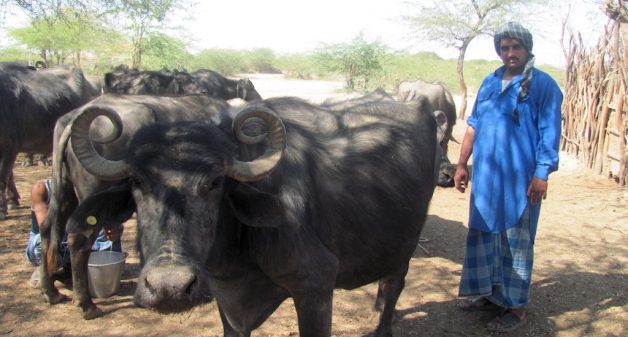 A Maldhari with his Banni buffalos. (Photo by Athar Parvaiz)

Banni, located along the northern border of Kachchh district in Gujarat, is a vast stretch of 3,847 sq km area of dry grasslands. Known for its pastoralist activities for centuries, the area is regarded as Asia’s largest tropical grassland as it acts as pasture for hundreds of thousands of livestock, which include the hugely significant Banni Buffalo, a high milk yielding buffalo with distinct characteristics.

The Maldharis (pastoralists) of Banni, because of their sheer resilience, have been able to survive and succeed while fighting against many odds stacked against them. Despite the looming threat of losing their right to live in Banni since they do not hold any land titles for their houses, they continue their practice of livestock rearing not only for their livelihood, but also for feeding the dairies and conserving the unique animal breeds of Banni.

Their basic source of livelihood — the Banni grassland — though a repository of nutritious grass species in the past, has undergone massive degradation in recent decades because of frequent droughts and the decision of the government to introduce an invasive species Prosopis Juliflora (locally known as Ganda Bowal) for conservation of the grassland in 1970s. Many experts have attested to the fact that this plant species has left an adverse impact on the Banni grassland.

In the recent past, the forest department had started fencing the Banni grassland at a number of places, but the pastoralists of Banni got together under the banner of their association Banni Pashu Uchherak Maldhari Sangathan (Banni Breeders’ Association or BBA), which they have formed in 2008 in order to challenge the fencing of grassland, which they call the working plan of the government for snatching the grassland from them.

They held protest demonstrations in support of their demand that Banni grassland, the abode of pastoralists and their livestock, should not be disturbed.

They have also passed a resolution and one of the demands of that resolution reads: “The titles and the rights of the land of Banni should not be given individually, but to the Maldharis of Banni as “commons”. This title should be given to the Maldharis of Banni i.e. to the Panchayats (grassroots governing units) as “commons” which have been included as the rights of “traditional forest dwellers” under the Forest Rights Act, 2006 of the Government of India.”

A Maldhari, Imran Ahmed, said that it was a “do or die battle” for the Maldharis. “We felt outraged and insulted that the decision about our commons is being taken under the comfort of air-conditioners without any consultation with us.” The Maldharis are yet to get the right to land, but now they have managed to get the attention of the government and the human rights groups.

Right after the formation of Banni Breeders’ Association in 2008, the Maldharis started organizing Banni Animal Fair or Banni Pashu Mela to showcase their livestock wealth; more importantly, the Banni buffalo, which they call the “pride of Banni.”

The animal fair presented them the unique opportunity of letting the people from other parts know how their animals like Banni buffalo and Kanraj cattle are distinct animals. The Maldharis said that they were encouraged by the NGO Sahjeevan to form the association, which is now registered as a trust.

The animal fair has become an annual affair, attracting traders from all over India and some other countries as well. The fair is inaugurated by government functionaries, mostly by the state animal husbandry minister, giving Maldharis a chance to discuss their problems such as the issue of land rights. “The animal fair has opened a window for us to negotiate with the government,” said Ramzan Chacha, another Maldhari.

The Maldharis said that more than 1,000 animals were sold during the festival as the buyers and sellers strike on the spot deals. Moreover, competitions are held for best male and female buffalo, best bull and best cow, which encouraged breeders to work hard to improve the quality of their animals. 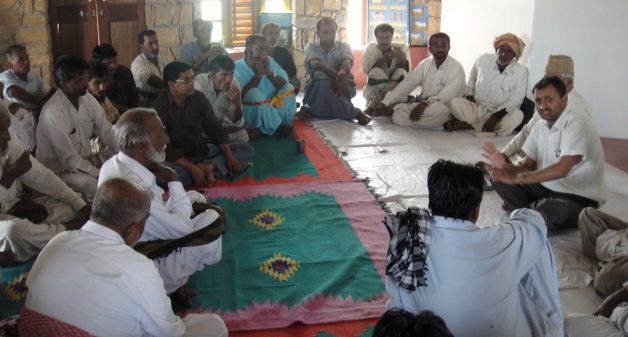 The association has also helped the breeders to work in collaboration with scientists, government officials and NGO workers for getting the Banni buffalo recognized as a national breed. “For years, we knew that our buffalo had some unique characteristics which differentiated it from rest of the breeds in India, but we had no idea how to prove it. Then we discussed it with the representatives of a local NGO (Sahjeevan), which helped us how to take up this issue with the experts and the government,” said Mohammad Karim, a Maldhari.

A select group of Maldharis from the Banni Breeders’ Association then monitored a group of buffalos and collected data on the directions of scientists from Sardarkrushinagar Dantiwada Agricultural University for about a year. On the basis of this data recording, the scientists prepared a breed descriptor and sent the registration application to the National Bureau of Animal Genetic Resources (NBAGR), the responsible body for recognition of breeds in India.

In 2010, the Banni Buffalo was successfully registered as the 11th buffalo breed of India, the first such incidence in India whereby a community that developed and conserved a breed was able to gain official recognition for it.

The Banni buffalo, pastoralists said, has not only the ability to survive in harsh climatic conditions of Banni and the typical quality of grazing during night, but has the all-important quality of excellent milk production, producing as many as 6,000 liters annually at an average and the daily milk yield of 18-19 liters.

The hard work of the breeders for getting their breed recognized has helped spreading the word about Banni Buffalo’s qualities and has resulted in price-increase for the buffalo. Today it is a common refrain in Gujarat that Banni Buffalo is priced more than the low-cost Nano car, which costs around Rs 120,000.

The Maldharis of Banni say it with pride that one needs to sell two Nano cars to buy one Banni Buffalo. “After 10 years of use, a Nano car would go to Bhangarwala (mechanical waste collector) whereas Banni Buffalo will produce at least four new buffaloes,” a pastoralist, Esha Halepotra, said.

With the arrival of milk collectors in Banni, following the formation of cooperative society by the pastoralists, more than 250,000 liters of milk are sold daily by the breeders to the dairy industry at a reasonable cost of Rs 45 to Rs 55. Earlier, the milk used to sell around Rs 15 to Rs 19 rupees per litre.

While many families across India lament the birth of daughters, breeders in the Banni area of the Kachchh region do the opposite: they allocate a buffalo to every single girl child of their community.

Razia Saleem is one of these girls. A student in the 9th grade, her inheritance already amounts to roughly Rs 200,000 — in the form of two small buffalos.

“This all belongs to her,” the girl’s father, Saleem Nodae said, gesturing at the grazing buffaloes. His three other daughters each “own” their respective share of his herd of roughly 80 animals.

Until they are old enough to tend to the creatures themselves, the girls receive part of the monthly income generated from sales of the buffalos’ milk, so they can “buy the things they want,” Saleem added. The rest goes to feeding and caring for the animals.

According to Saleem, allotting a buffalo to a girl at the time of her birth is an investment worth making. “By the time she is married, she will have five or seven animals to her name. She can take these creatures to her in-laws with pride,” he said. “This will allow her a degree of independence.”

For their own part, the girls use their allowances wisely. Razia recently spent three years’ worth of her savings to buy a desktop computer. “This is the age of technology,” she said. “I want to benefit from it.”

Right now she mainly uses the machine to practice her typing. “I will start using the Internet only when I really need it,” she added.

Some 10,000 breeders live in Banni, tending to over 168,000 buffalos. The Maldharis here are more economically independent than their camel-rearing counterparts, largely owing to consistent demand and formal markets for buffalo milk.

Even so the nomadic breeders live simple lives, moving with their herds over the grasslands for most of the year and residing in modest dwellings during the monsoon season.