Minimal interventions in Andhra Pradesh districts such as Visakhapatnam, Vizianagaram, and Anantapur show that it is possible to boost the productivity of inland fisheries without too much effort 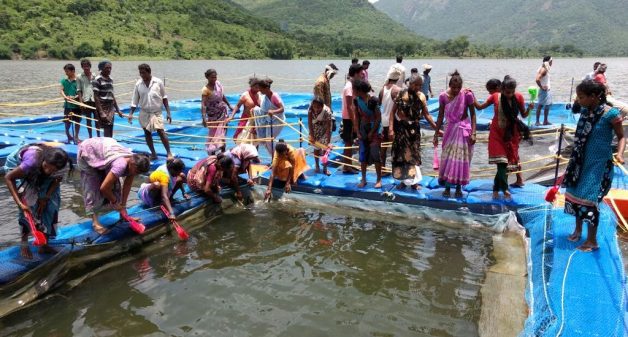 Fish is being grown to a marketable size by a cooperative society in Visakhapatnam in Andhra Pradesh.

A growing population and increased fish consumption have put a burden on the seas, with catch from the oceans dropping by the year. Inland aquaculture, or fish farming, is one potential way to meet this demand and ease the pressure on the oceans. Several farmers and entrepreneurs have taken advantage of this and it is becoming a large and profitable industry.

It is therefore not surprising that the inland fisheries sector has been identified as a driver of economic growth for farmers by the Ministry of Agriculture in New Delhi, as well as in several states such as Andhra Pradesh, Jharkhand, and Chhattisgarh. Given that well managed private fishing resources in many places are close to peak productivity, where is this growth going to come from unless we borrow some of Israel’s advanced aquaculture technologies?

Public inland fishing resources such as reservoirs and riverine, wetland and other public water bodies account for a large portion of the total water spread area in the country. However, they are at present underutilized due to a combination of factors — inadequate management practices, multiple claimants and multiple uses of water bodies. Traditionally, these water bodies are leased to fishermen’s cooperative societies. The oft-cited tragedy of commons holds good in this case as well. Well-managed private fishponds produce up to six tons per hectare every year. In comparison, the average productivity of these reservoirs is about 80 kg per hectare per year. There is, therefore, a huge scope to improve productivity.

Beyond merely catching fish, the systematic fishery has seemed like rocket science to many of the communities engaged in these activities. If the sector has to grow, and productivity of water bodies and incomes of fisher folk are to improve, some demystification is necessary. It was thought possible to overcome this deficiency in knowledge and skills by working with cooperative societies and smallholder farmers. To do this, it was necessary to build their capacity in these aspects as well as by plugging other gaps in the value chain.

With that intention, Tata Trusts worked across six locations in Andhra Pradesh, helping pilot the cage fish culture initiative of the government with the participation of the communities. This can serve as an entry point to initiate a shift from capture fisheries to culture fisheries. 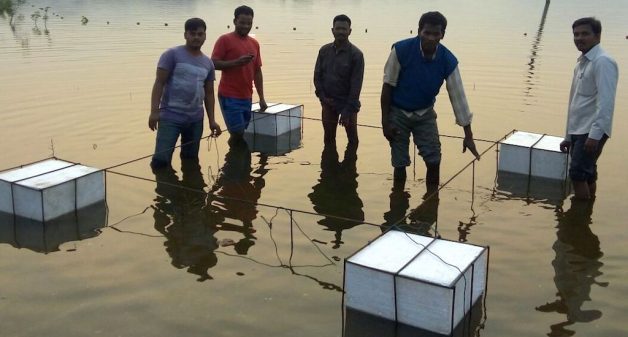 A fish cage constructed by the local community in Vizianagaram.

The experiments across the value chain suggest that these gaps can be plugged with fairly simple techniques and technologies that can be owned and operated in partnership with the community. While fish breeding involves some technical matters, the communities can perfect them over time. Fish eggs hatch into spawn, and the spawn needed to be cared for, and in about three months’ time, they reach the right size for release into any water body.  Backwater areas, canals, small runoff ponds and others, depending on size and seasonality have various uses — seed production, fry, and fingerling rearing, grow out, brood fish maintenance, etc.

This task hasn’t been too hard. Communities actually welcomed the installation of new technologies or appropriate technical inputs. This was demonstrated this at most locations. It wouldn’t be fair to compare cage productivity to reservoir productivity given the low base, but it has helped change the mindset of the communities about the potential of the resource they own.

Beyond the technical side of things, there is the need to build the capacity of societies in managing the resources, and engaging with the market. Improving their ability with management issue has been a harder task.  Most of the cooperatives previously had no practice of bookkeeping. They were engaged on a daily basis, exposing them to ideal management practices, and slowly, the cooperatives started keeping the most basic records. Exposure visits and surveys of local markets helped build their confidence.

In locations in Visakhapatnam and Anantapur districts, the societies were able to bargain with the traders for a greatly improved farm gate price per kilo, an increase of 30-40%. The Anantapur cooperative has also started the process of savings, with each member contributing Rs 10 per kg to a corpus for seed production in the coming season. They wrote to the government and got a set of unused nursery tanks at the government fish farm leased out to them for the purpose of seed rearing. A portable hatchery followed, and for the first time, that particular fish farm witnessed the production of Indian Major Carp spawn.

They also performed the unenviable task of having to move their cage over a kilometer in water to avoid conflicts with other water users.  In Visakhapatnam, the cooperative society took real ownership of the cages, and every Saturday, about 70 of them, men and women, young and old, go together to clean the cage, in a pilgrimage of sorts. In Srikakulam, a set of small ponds that lay unused for several years was identified by 53 women, cleaned and prepared for stocking and, from November this year, has been used to rear fish. A production of over 1 ton per acre is a realistic estimate in the very first year.

After training on fish processing, they also began experimenting with value addition. They made fish pickles and other products and sold them nearby. A district official decided to gift them a cooking gas connection to support them further. In Vizianagaram, the cooperative tried carp breeding but saw all their efforts to be washed away in the rains. They then tried spawn rearing in cages for the first time, and in October, became a resource center of sorts where 40 other cooperatives from the district came to learn from them.

This was followed by the unfortunate act of sabotage when the healthy fish seeds were poisoned and killed by some disgruntled man. But that hasn’t made them unsure in the least. At the time of writing, the society is breeding the common carp and will be rearing their seeds in low-cost cages that they manufactured on their own, having learnt from all their past experiences.

The fisheries initiative at the Trusts is only one-year old, and the work has barely begun. We’ve had some little victories. We also encountered a few not so little challenges and learnt some very valuable lessons in this exercise. Most of this has happened largely due to the open and supportive Department of Fisheries of the Government of Andhra Pradesh. The cooperative society at Dimbhe reservoir in Maharashtra has shared with us everything they’ve learnt the hard way. Neelkanth Mishra of non-profit Centre for Aquatic Livelihood Jaljeevika, whose passion for this sector has helped shape many interventions, helped in the intervention all the way.

This has been a unique experiment where a philanthropic institution, the state government, and people’s institutions have all worked together to produce sound results. This experience provides confidence in the idea that by choosing an appropriate problem to solve and developing a strong value proposition around it, with a due attention to risks and returns, it definitely is possible to pay short, medium and long-term dividends to rural society.

Karthik Ramesh is responsible for the fisheries portfolio at the Tata Trusts. He is an alumnus of the Indian Institute of Management Calcutta. The views expressed in this article are personal.

Karthik Ramesh is responsible for the fisheries portfolio at the Tata Trusts. He is an alumnus of the Indian Institute of Management Calcutta. The views expressed in this article are personal.