When women living around Attappadi Reserve Forest found that no development was possible due to chronic alcoholism among the tribal men, they banded together to rid the area of the menace and start a labor bank for employment 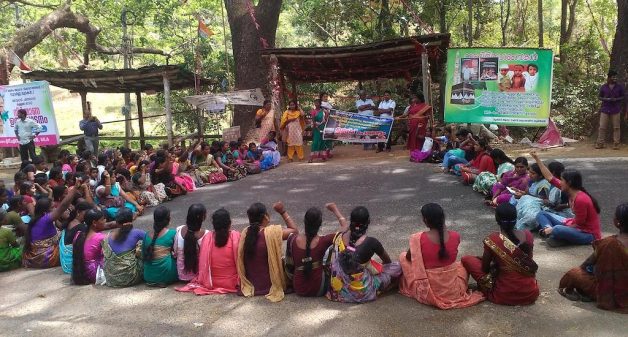 Women of Attappadi at a sit-in protest against alcoholism.

Marudhi Mari, a 57-year-old tribal woman from Attappadi, a tribal belt around the Silent Valley National Park, is no ordinary woman. As Secretary of Thaikula Sangham, a resource agency formed for social action and intervention against alcoholism in 2016, Marudhi played an important role in controlling the long plaguing problem of alcoholism among tribal men in the area.

“Initially, the challenge was to build the trust of tribal women. And to start the community kitchen, we wanted them to open bank accounts for transparency in transactions,” Seema Bhaskar, Coordinator, NRLM, told VillageSquare.in.

The funds for the project were disbursed in 2014; however, there were larger concerns among the tribal women. Seema says, “The women said that there was no point in having funds unless we solved alcoholism among men as it affected children’s education, led to youth suicides, mental disorders, mortality and domestic violence. Economic empowerment cannot happen without breaking this social barrier.”

In 1996, the then Chief Minister of Kerala, A.K. Antony made Attappadi a non-liquor zone, and in 2002, former President APJ Abdul Kalam led the Attappadi Declaration, calling it a “liquor and drug-free zone.” However, Attappadi remained liquor-free on paper. Non-availability of liquor locally did not reduce alcoholism. The men crossed the border to Anaikatti in Tamil Nadu for buying alcohol. For over a decade, the community men have been doing this. Vanchi Kallan, a resident, says, “Drinking alcohol is not in our culture. There are others who buy and give to our people.”

Seema says, “A large number of men between the age of 18 and 45 died within a short span of time, however, we cannot directly connect these deaths to alcohol consumption.” Since the men die early due to this habit, women have to fend for themselves and their family.

A large discussion happened among the Panchayat Samithis (village councils) and the Oor Samithis (a group of NHGs) for strategies to fight alcoholism. Seema says, “This was unlike a one-to-one husband-wife issue, and a larger fight against alcohol mafia within the tribal community.”

A survey across 196 tribal hamlets conducted by women along with NRLM revealed that 116 men, including youths, had died of alcohol-related diseases during the past two years.

The Thaikula Sangham women led an agitation from their state Kerala to stop selling of liquor in Tamil Nadu. “Our politicians asked us how we would battle and win in Kerala for action that has to happen in Tamil Nadu,” Vanchi Kallan told VillageSquare.in. 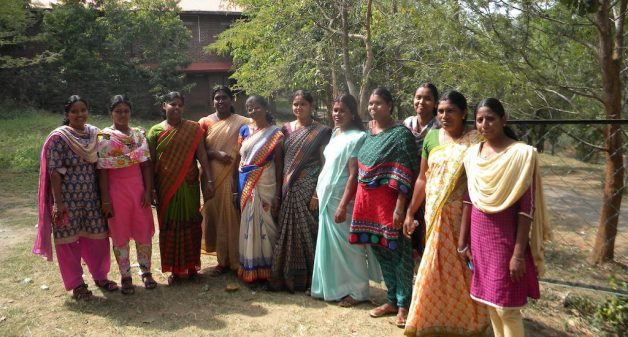 The leaders of the anti-liquor campaign.

Women staged a dharna (sit-in) in a temporary shed on the roadside near the state border. They also resorted to non-violent peaceful passive resistance, hunger strike, roadblock, processions, shutting shops and stalling traffic. There was both support for and opposition against this movement.

Vanchi says, “We crossed the border, were attacked, arrested and even beaten by the police.” Seema adds, “The police arrested women in large numbers. Then, there was a declaration from the late Chief Minister of Tamil Nadu J. Jayalalithaa to shut the liquor shop in Anaikatti. That was a great moment for these women. We just backed them, but they fought this issue on their own.”

The women did not stop there. They wanted to ensure that every step was taken to reduce alcoholism. Every village had a committee, and the women stoned the alcohol brewing pots and distilling machinery. Marudhi says, “We conduct raids and inform the police if men are found distilling or consuming alcohol.”

Vanchi says “Once there was an issue, and about 10 of us caught the man, tied him to a post and called the police.” Marudhi adds, “When we called the police, they asked us to show the person, and that led to problems. We told the police that we would give information but our identity should not be disclosed.”

Marudhi did not hesitate to send her own father to jail because of alcoholism. She says, “He kept the bottle under his pillow. He also kept 5-6 liters in drums, and then sold it to people for money. I caught five to six people and sent them to jail. I bailed out my father in two weeks, though.”

In another episode, an auto rickshaw bringing liquor to the Chindakkiooru village was obstructed at night, the bottles broken and the driver was warned against the supply of liquor. The women constantly do night patrolling to locate the sources of liquor coming to the hamlet.

Marudhi says, “The alcohol incidents have reduced. People are scared of the women group now.”

Youth to battle against alcoholism

The women have now been involving the tribal youth to battle alcoholism. Seema says, “Lectures will not help, so we started sports matches. Now, the youth are organised almost at the hamlet level. Next, they will move to the Panchayat level, and the strategy is to reduce alcoholism through them. It is not men versus women here, but how youth can be involved to fight alcoholism. It is a battle of an entire community.”

The youth resource election is set to happen at the Panchayat level after the final football match.

Another challenge was to find employment for the youth and men here, which would reduce the alcohol incidence. For that, a labor bank was created. The women group collected data from each hamlet on the availability of resource people, their age, skills sets, etc., and compiled them. So far, 3,500 people have registered. The men have received skill development training courses and can be gainfully employed.

To set up this labor bank, there was resistance. Seema says, “Whatever development happens here, the tribal youth do not get work. The work goes to contractors. That is one of the reasons for alcoholism and suicide among men here.”

Seema says, “They are unable to adjust to cities, so if they get jobs in their own hamlets, it will help them. At least for government projects, the local people can be hired. We are also working to invite private companies. The forest department is also showing interest. In the long run we could take up contracts as well.”

No impact of demonetization

Since inception, the group has been running the show through online transactions. Rengee Karthy, another resident, told VillageSquare.in, “All of us did not have bank accounts before the community kitchen started, but we opened the accounts and received training from the bank on using it. Demonetization did not impact us as payments were made using cheque or NEFT (National Electronic Funds Transfer).”

Interest money, loans, disbursement from the Kudumbashree office to the tribal group happens this way. Seema says, “There was a huge resistance initially as all the money was going to these tribal hamlets, and not a single rupee lapses in the project since the transactions are cashless.”

The banks come to these tribal villages, making their lives easy. Rengee says, “We have a mobile bank which goes to different villages on different days. After that was started, things were easy for tribal communities living in deeper forests.”

Seema says, “We do not keep over Rs 1000 in our office and that is kept for emergency hospital expenses. Even salary to drivers is paid via NEFT.” The community women are vigilant and monitor financial activities closely to prevent corruption.

The women, who were once scared of stepping out of their homes, now converse fluently, know what they want, are determined to solve the social issues, handle finance, and take proactive steps for community development.