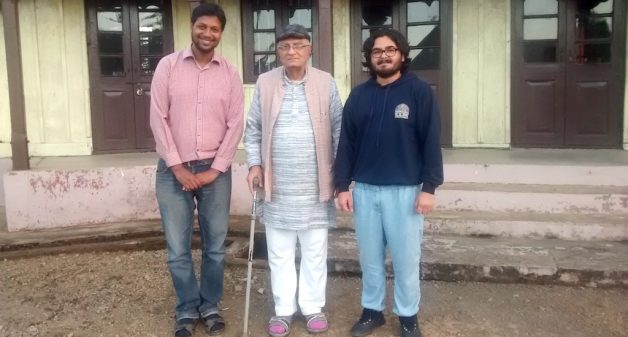 Natwarbhai Thakkar (center) with visitors at the Gandhi Ashram in Chuchuyimlang village in Nagaland. (Photo by Ajit Kanitkar)

For many Indians even today, the northeastern states of the country and its people are in the limelight most of the time for the wrong reasons. Be it news of violence, floods, insurgency and road blocks, the collective imagery of this part of our country in the national consciousness is still a region that is not just geographically remote but mentally alien.

The story of Natwarbhai Thakkar of Nagaland is refreshingly different. Thakkar came to Nagaland in 1955 to promote national and emotional integration through voluntary service on Gandhian principles and to conduct activities for all-round development of the people of Nagaland and northeast India. A Gujarati by birth, he chose to move from his hometown of Dahanu Road in Maharashtra in western India to Nagaland in the far east, inspired by the ideals of Mahatma Gandhi’s thoughts imbibed during the freedom movement and further mentored by late Kaka Kalelkar, freedom fighter and social reformer. Since then, his efforts, along with his wife Lentina, an Ao Naga, and many volunteers and staff of Nagaland Gandhi Ashram are still directed at peace-building efforts at the frontier in spite of all the odds.

When he arrived in 1955, the road from Amguri in Assam foothills into the mountains of Nagaland was just about 80 km but it too many hours to reach the Chuchuyimlang village due to the difficult terrain. Chuchuyimlang then had houses with thatched roofs. Over the years, these made way to houses with tinned sheets and later into concrete structures. Communication facilities were a distant dream as not even a post office existed then nor a telephone link with the outside world. Electricity was a luxury.

In his first week in the village, he saved a child who needed medical attention and care. Slowly and steadily, responding to the needs of the community, a number of development initiatives were pioneered by the Gandhi Ashram established by him. These included weaving, vocational education, primary education, a library, youth activities, livelihood training and so on. Some activities flourished while others did not. The government, taking a cue from the Ashram, started a number of initiatives serving the very purpose of pilot efforts undertaken by the Ashram. 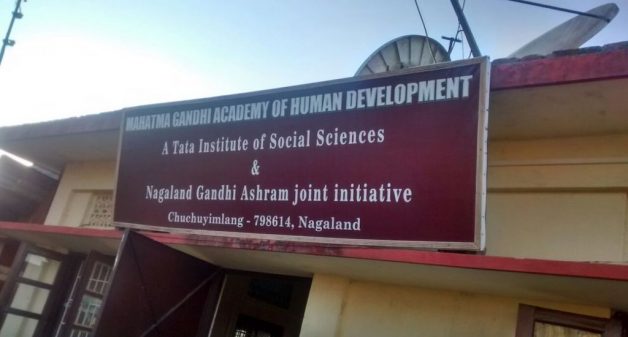 The Ashram offers a postgraduate program in Human Development in collaboration with Tata Institute of Social Sciences. (Photo by Ajit Kanitkar)

However, the journey was treacherous and Natwarbhai had to face many challenges. Those who did not believe in national integration did not see Ashram activities sympathetically. In early years of his coming to Nagaland, his house was attacked at night by forces hostile to his efforts in peace building. He and his family had a narrow escape. The government often found his work irksome as he took a principled stand against any injustice and unfair practices causing harm to the Naga community.

But Natwarbhai persisted and remained steadfast like a true karmayogi. As his work expanded and found acceptance amongst the community, Natwarbhai became a part of the local community. Visitors and dignitaries blessed his work and stood behind his efforts in solidarity. Awards, recognitions, and fame came his way, but it did not affect him personally. He remains to be the same humble person with a mischievous sparkle in his eyes.

After 1990, when the computer education movement began to roll out all over the country, not to be left behind, Nagaland Gandhi Ashram was the probably the first NGO to establish a center in Chuchuyimlang village with the help of Ministry of Communications of the Government of India. The Ashram recently tied up with the Tata Institute of Social Sciences and is offering a postgraduate program in Human Development. The government has allocated land in the village and hopefully, a fully residential campus will come up in the coming years. As he says, “That will be a farewell gift to me.”

Natwarbhai is a living memoir and encyclopedia of the northeast and especially Nagaland, the 16th state that was born in December 1963. I first met him in his Ashram in August 1987 when I was working as a volunteer with Jnana Prabodhini, a Pune-based NGO working in the field of education and national integration. I then lost contact with him and then got an opportunity to meet him almost after thirty years in November 2016. When I had first met him, he had mentioned about cultivating a sense of healthy curiosity. Those words stayed with me even now. Natwarbhai had continued on this journey of nurturing a healthy curiosity amidst changes that sometimes overpower the village life in remote regions. Natwarbhai at his young age of 85 is an active facebook user. Thanks to the facebook, I could reconnect with him.

During my visit, we talked about many things but I wanted to hear from him on what has changed and not changed in Nagaland in these fifty years. His observations are poignant. “At that time, there was not a single educated person in Chuchuyimlang village. Now we can count a few IAS officers, teachers, government servants, and lawyers. There was neither a post office nor a telephone facility. Now the Nagaland Gandhi Ashram runs a computer center with over 60 computers offering several short and long duration courses for Naga youths. I see several other positive things happening in the society. We have now three local newspapers published from the state. There is a lot of debate on issues affecting the Naga society. I see a small beginning of the emergence of civil society. In our neighbourhood, someone recently started an orphanage. There is an active debate on issues impacting Naga society.”

However, he is quick to point out that what is sorely missing is the moral foundation of the society. There has been a great erosion all around in our society. That to him is a worrisome trend.

On his long innings to build bridges between the Naga society and rest of the country, Natwarbhai is more circumspect in his reply. “For me, it has been a long and sometimes tiring effort as also frustrating experience to build bridges among Nagas and citizens in other parts of the country. I think that this connect is still very weak. It will take a long time to build strong linkages. But I am ever optimistic. There was an incident in the Raj Bhavan in Kohima where some miscreant removed the statue of Mahatma Gandhi. While this incident happened, around the same time, in my village Chuchuyimlang, the village council decided to felicitate me and honored me with an award for lifetime achievement for community service. I am the only non-Naga to have received this honor.”

What is that energy that continues to motivate him against all odds? He is modest in sharing, “When I left for Nagaland, my mentor Kaka Kalelkar had advised me that you might believe or you may not believe. But try to continue to offer prayer at least every day as you get immersed in work. Thankfully, I have not missed my prayers all these years with only a few exceptions. The prayer is the Universal prayer that is sung in every Gandhi Ashram. OM tat sat sri narayan to purushottam guru tu.”

As I returned to my workplace after a weeklong travel to the northeastern state, I continued to hum the universal prayer of peace that Natwarbhai and his fellow workers in the Ashram sang year after year, every single day, for spreading peace and promoting wellbeing, literally at the frontier. The Gandhi Ashram in Chuchuyimlang is the peace post at the frontier manned by a Gandhian volunteer almost singlehandedly for the last 50 plus years.