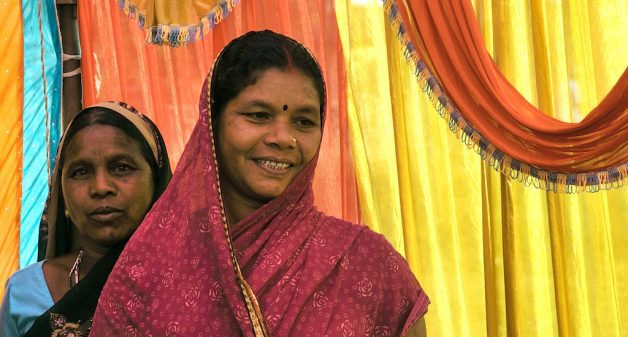 Community resource persons are reaching far corners of India to deliver the promise of development. (Photo by Asian Development Bank)

Beyond news headlines, there are many transformational stories that either go unnoticed or find a scant space in the media. One of the many stories is that of a silent revolution sweeping the country, from east to west and north to south, in hundreds of villages. The champions and torchbearers of this silent revolution are none other than hundreds of community resource persons (CRPs) building foundations of a resurgent countrysidesexyxxx.ccsexyxxx.

Over the years, civil society organizations have been struggling with the uncomfortable question of how to reach a large number of citizens in many locations? It is rather a disturbing question since many of the NGOs engage with village communities as a so-called outsider. The NGO professionals come, interact with the village community, work with them but when the deadline of the project is over, most have no option but to wind up their operations or wait for another project to begin. Very few continue to engage with the community in the same area with their own resources.

More than the phasing out of the projects, the fundamental question has been about the community taking charge of its own developmental processes and ownership what in academics is known as agency. Do communities continuously remain in the mode of recipients or is there a way out when they become not just initiators of their developmental agenda but also become torchbearers for other communities outside the geographical boundaries that they belong.

The idea of CRPs is a creative solution that believes that the poor can be the best extension workers for many communities. The idea is not just a theoretical proposition but has been silently practiced over last several years. It is time now to celebrate this success.

In different parts of the country, women from various communities are taking the lead in sharing with other women what development means to them and what it has done to them. The nomenclatures are different but the spirit is the same. In the work of Self Employed Women’s Association (SEWA) with lakhs of women in western India, they are called aagewans (those who lead from the front in Gujarati). The aagewans have reached out to hundreds of villages in Gujarat to spread the message of self-reliance and dignity, a task that SEWA staff on their own could not have done.

The National Rural Livelihood Mission of the Government of India popularized the concept of CRPs who spread the message of organizing women into self-help groups (SHG) of 15 each, organize their training and provide directions in undertaking livelihood activities once enough financial and social capital is accumulated in the SHGs. Hundreds of trained CRPs worked in states such as Bihar, Jharkhand, Nagaland and Meghalaya. The familiar sight of accredited social health activists (ASHAs) and anganwadi (day care center) workers is another manifestation of the village-based professional spreading the messages of better nutrition and health practices among mothers and young children.

But the work of CRPs is not just limited to forming women’s groups and or motivating them to adopt saving or better health behaviors. Hundreds of women are now venturing into territories that were otherwise seen as taboo and or male bastions. The pashusakhis of UMED, Maharashtra’s Rural Livelihood Mission, are village-based veterinary professionals, all women, trained by a professional agency, the Goat Trust in Lucknow. These pashusakhis, 500 of them, are village-based veterinary caretakers. They are selected from the community, trained intensively in the task and placed within the same community they hail from.

Then there are krishisakhis, the women in agriculture who are spreading message of sustainable agriculture. They have got training in using video cameras, have recorded better agricultural practices and then have moved to share their practices using small Pico projectors to neighboring villages to spread awareness. There are innumerable stories of women accountants and auditors in villages, meticulously auditing transactions, keeping tabs on loan repayment and so on. Not to lag behind, they are using android and computer tablet applications to perform the tasks efficiently (See: Tablet girls of Jharkhand storm digital bastion). Recently, UMED trained more than 50 matsyasakhis, women resource persons to improve livelihoods in inland fisheries. There are similar initiatives across the country.

The contribution of these silent professionals has been manifold. Firstly, they have ensured last-mile connectivity. There are scores of instances where CRPs have travelled to far corners of Telengana, Jharkhand and Jammu and Kashmir as a part of the National Rural Livelihood Mission. This was unheard of a few years ago. The CRPs, with their sheer hard work, dedication and self-experience, persuaded local women to join in the SHG movement, form groups, start savings and begin a journey of self-development.

Secondly, the fact that a woman is sharing her life story with another woman has brought credibility to the process of development. In Maharashtra, more than 100 women (vardhinis) travelled from Wardha district in the east to Ratnagiri on the west coast to share the messages of the livelihood mission. Who else can be more credible than a Chhattisgarh woman telling her neighboring villagers the benefits of improved rice cultivation as propagated through the System of Rice Intensification (SRI)? No wonder the SRI revolution has caught up the imagination of farmers across the central India that has led to significant improvement in productivity and reduction in costs.

Thirdly and most importantly, the CRP movement has broken the barriers imposed by the stereotypes and patriarchal beliefs long cherished by the society. Why can’t a village woman use software to calculate the interest spread and portfolio at risk (PAR) on the loan that is outstanding for her federation? Why cannot a woman tell the difference between organic farming practices? Why cannot a woman do measurement of a toilet under construction and issue work orders? There are innumerable examples that illustrate the breaking of the norms that prevented girls and women from performing tasks that are considered to be only men’s prerogative.

What can we do to strengthen this silent revolution? We can do several things to sustain the momentum that has begun all over the country. The CRPs and their contribution need to be recognized. Their work and participation need to be seen with appreciation. They are performing a herculean task in their local context and that deserves a certain reward. The least we can do is to label them as barefoot paraprofessionals. Accord them the dignity that they deserve.

Lastly, they are not just CRPs. If the country has to bridge the divide between shining and deprived India, the community resource persons are the country’s resource persons. These are our most critical human capacity ushering in changes in all parts of the country, at the last mile. Let us give due recognition to these CRPs.