A lack of livelihood opportunities is compelling villagers of Vidisha district in Madhya Pradesh to take up jobs in local stone quarries, where unregulated work conditions are often extremely hazardous for their health 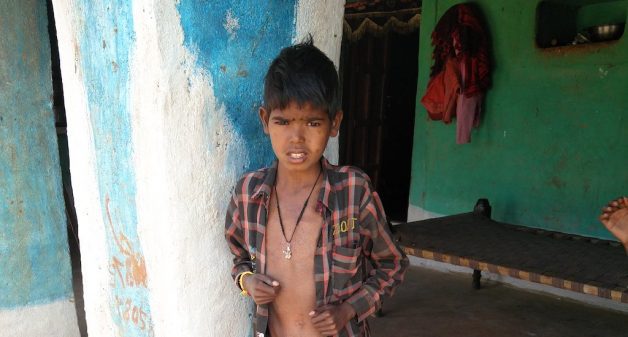 Ramswaroop of Badahar village in Bidisha district was diagnosed with tuberculosis at the age of 7. (Photo by Abhijeet Jadhav)

In villages where livelihood options are limited, people are pressed to take up hazardous and unregulated jobs. Lakhs of people spend their entire lives breaking stones in quarries located in remote rural areas. What they get in return is not just a pittance but also many occupational hazards with the worst of health outcomes. It is high time to address these problems, understand their needs and start looking for the solutions.

When we imagine a village, we typically think of green farms and communities with lifestyle woven around agrarian livelihoods. But, there are many villages in India that are not fortunate to have fertile land or plentiful water for agriculture and there are many small communities somehow living in the dry lands even though their lives are devoid of many basic things. What do these people do for living? Their jobs are not usual jobs neither their work related hazards are typical.

A visit to Badahar, Lamanya, Lehdara and Saheba villages in Ganjbasoda Taluk of Vidisha district in Madhya Pradesh, which are devoid of much agricultural activity, makes it clear that open stone mining is one such occupation in this area, with its associated health hazards.

These villages are at the end of dry and dusty roads through barren land with minimal vegetation and almost no domestic animals. What exist in abundance are unearthed slabs and sheets of stones. This red rock can easily be thrashed to sheets with considerable strength. To make this into a profitable production model, abundant human resource is readily available, which can be transformed into unorganized workforce for illegal mines and these areas are too remote to get caught by law implementing agencies. Workers bring their own chisels and hammers at very young age and start a lifelong tussle with stones in dust-smeared body. There is hardly any change in the working methods and conditions since thousands of years irrespective of better understanding of occupational hazards and well-meaning laws.

Mining has been identified as one of the most risky sectors for workers and there are certain rules and regulations for the protection of workers. But in reality, things run in an unacceptable manner. Some locally influential people choose remote plots and start open mining without any mandatory permission or inspection and use local people as labor without any training or protection gears.

These people are not covered by any employee welfare scheme like employee state insurance schemes, mainly for two reasons. Many of these mines are illegal and in those that are legal, the workers are not organized. These laborers do not have any negotiation power, as there are hardly any employment options available for them. Mostly, there is monopoly or oligopoly on these mines and workers are left with very few choices. In such scenario, their entitlements are easily manipulated. These workers do not get any benefit of government schemes for the poor.

Unfortunately, their risk profile and health expenditure is very high. Also, in these remote areas, access to health care is problematic, making the situation pretty bad in terms of health outcomes. This overlap of multiple vulnerabilities has lead to tragic life journeys asking for deeper inquiry into these problems.

Data from relatively better-regulated public mining sector can give an idea about the burden on workers in informal mining sector. In 2013 alone, there were 82 reported deaths in public-sector coalmines (0.21 deaths per 1,000 workers) and 74 deaths in other mines. These death rates are always much higher than the army’s death rates of respective years, except for the years of war.

In 2013, there were 456 serious accidents leading to 468 serious injuries in coal mining (1.31 injuries per 1,000 workers) and in 2012 these figures were 536 accidents with 548 seriously injured. There is no much information about deaths, serious injuries and disabilities about unorganized and illegal mining. It is debatable that what percentage of these deaths and injuries were preventable but it is obvious that a considerable portion of the reported deaths could have been prevented. The situation in illegal mines is certainly worse. 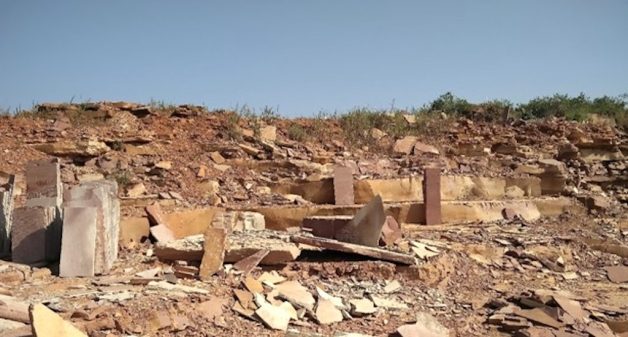 A stone quarry in Bidisha district of Madhya Pradesh. (Photo by Abhijeet Jadhav)

Upon asking about injuries, these workers started showing their recent unhealed injuries and there were many per person. They told many stories about tragic accidents and grievous injuries, disabilities and accidental deaths in these mines.

Raja, a 22-year-old resident of Saheba village met with a tragic accident while working and lost three fingers. After the accidents, these poor people often wander from hospital to hospital. In order to save his fingers, Raja and his father lost all savings and family assets. Raja’s engagement was cancelled because now he is out of a job and his family is deep in debt. Raja said his fingers might have been saved if they could have reached a hospital in time instead of the horrific journey of 15 hours from place to place. People here could not think about any other job because it’s not available. Raja’s father still works in the same mine.

The proportion of silica can be 20% to 40 % in the stones quarried from these mines. These workers are constantly exposed to high concentrations of silica dust. Constant silica dust exposure reduces appetite of these workers, affecting nutritional status. Silica exposure can lead to a progressive fibrotic lung disease called as silicosis, which leads to lung disability, making normal physical activities difficult for these workers over few years, but this disability is not visible.

Studies show that one-fourth to one-third of exposed workers get silicosis and it is most common occupational lung disease in India. This non-treatable disease increases risk of pulmonary tuberculosis by three folds, leading to silico-tuberculosis, which is not easy to diagnose or treat and requires intense drug regime.

Mining areas also pose major challenge to the government’s TB control program. In these areas poor people exposed to silica have a higher possibility of getting tuberculosis. Once these workers get silico-tuberculosis, they are usually treated by quacks due to limited access to proper medical care. Even if they could reach to proper medical facility after prolonged suffering, they often get misdiagnosed as just TB or something else and eventually come in the category of defaulter or treatment failure as per the classification national tuberculosis program.

Eventually system and patient both get fed-up (sometimes after catastrophic expenditure) and the worker continues to suffer with silicosis or silico-tuberculosis. There is no much focus in medical education, training, capacity building and practice about occupational diseases, neither it is a priority in national health planning, leaving the burden of occupational diseases unaddressed. Response to silicosis elimination program of the World Health Organization is not that great.

In a health camp conducted among stone mining workers in a village in Ganjbasoda, 19 out of 103 workers were on anti-TB treatment in the past, and eight out of 103 are currently on anti-TB treatment. These figures are way higher than our national averages. There is possibility that many did not reveal the history of TB or treatment failure but their physical appearance told different stories.

Due to the intense mining activity, there is lot of dust in the areas and people living here are constantly exposed to the dust. It was sickening to see a 13-year-old Ramswaroop in Badahar village, who was diagnosed with tuberculosis at the age of 7 (but actually had silico-TB) and had multiple rounds of unsuccessful treatments. Now he is barely surviving with silicosis, extreme lung disability and half of expected weight. He is stunted and malnourished. He cannot move much and even standing makes him breathless. His mother is said to have tuberculosis, which is recurring since a decade (actually there is need for better investigation to rule out silico-TB). Ramswaroop’s parents still work in mines and their house is close to the mining area.

Every third man in this area had active fungal infection in the groin due sweaty work in heat and some of them were in quite bad form. This disease causes constant itch and skin scabs but due to shame and lack of access to health care, many workers don’t do anything about it.

Laws need to be better implemented

The informal nature of employment makes these workers vulnerable for exploitation. Poverty and under-development and sectors like stone mining add a thick layer of various hazards. Proper implementation of the factories act of 1948 and the mining act of 1952 can prevent many deaths, disabilities and suffering. Covering these people under ESIS or some employment and health coverage schemes can make significant changes in their lives. There is a lot that can be done for these villages. Let’s hope it will happen someday.

This study was funded by TISS Faculty grant.

Abhijeet Jadhav works with Center for Development Research in Pune. He was earlier faculty at Tata Institute of Social Sciences