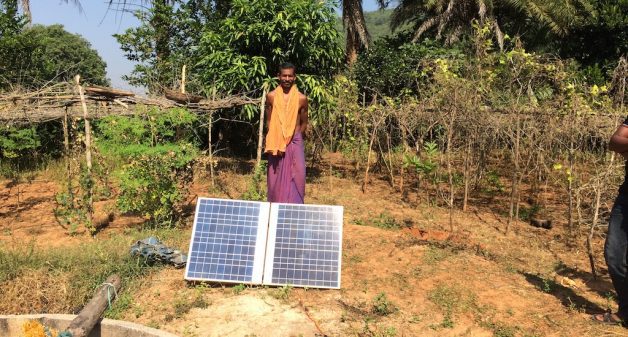 Ratnakar Hail, a smallholder farmer from Jhinjiripaonga village in Bissamcuttack administrative block of Rayagada district in Odisha, is a happy man today. Not able to sustain his family from the small plot of land he has, Hail used to migrate to far off places to earn a living. “I used to migrate to Kerala for six months every year. The work was very boring and tiring. We handled machines all day,” he says. “After the rains there was nothing we could do here and out of necessity we had to move out.”

Things changed for the better when he started using a small solar pump to irrigate half an acre of land. “With these small solar pumps, now we can irrigate our lands during the winters too. It is much better when we can grow food on our land,” Hail told VillageSquare.in. “We eat better, and also sell some vegetables in the local market.” Hail now cultivates tomato and brinjal in the months between November and February.

Farming still is mostly traditional in Rayagada in southern Odisha. Jhoom cultivation, eucalyptus plantations and fruits and vegetables along with paddy growing at the mercy of the rains is a common sight. Most of the farmers belong to the Kondh tribe. The region has several small streams of water with Vamsadhalla and Nagavalli being the major rivers, which originate in the adjoining Kalahandi district.

The rainfall in the area is mostly from the southwest monsoon and lasts from middle of June to October. The average annual rainfall varies from 1,030.21 mm to 1,569.50 mm. In a district where only 30% of the gross cropped area is irrigated, small and marginal farmers (owning less that 2 hectares of land) constitute the largest chunk of total land agricultural holdings at 50%. 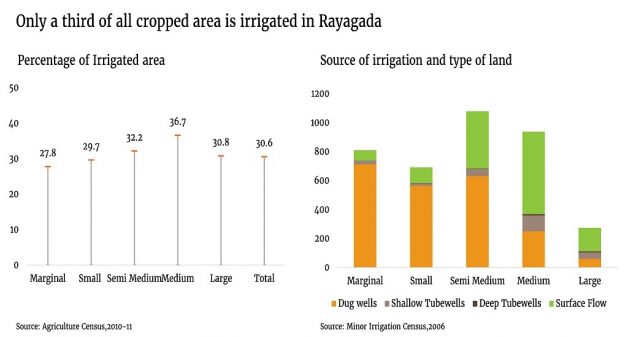 These farmers have traditionally been dependent on rains, with millets, rice and a few vegetables for household consumption being the primary crops grown. Irrigation, which was mostly manual, was restricted to surface sources and groundwater through dug wells. The pumps used were in the range of 0-2 horsepower.

To alleviate this situation, the state’s tribal department ran various schemes for irrigation support to small and marginal farmers through different pumping devices that depended on diesel or kerosene. Either community owned or individually led, these schemes faced a problem because kerosene was difficult to procure in remote areas.

Similarly, the deep bore well scheme launched in 2011 provided small and marginal farmers with a bore well and a grid connected electric pump at subsidized prices. However, after installation, all maintenance and operational costs were to be borne by the farmer. Cases of bore well failures and pump dysfunction are quite common, for which farmers have to pay from their own pockets.

On the renewable energy front, the solar pump market in India is largely subsidy driven. The demand for solar pumps is high in the western states where groundwater levels are low and higher capacity pumps are required. This need for large pumps does not exist in the eastern states such as Odisha, where abundant groundwater and adequate solar energy makes it easier to use smaller capacity solar pumps for irrigation.

A field study was conducted in Bissamcuttack and Muniguda blocks of Rayagada district to understand the use of small capacity solar pumps for irrigation practices and agriculture. Currently, 45 farmers have become part of this project with the help of civil society organizations. These pumps comprise of two panels of 75W each and a small (less than 1 horsepower) submersible motor. The pumps are provided at a subsidized price, and on a loan to farmers. The total cost of the setup is less than Rs 20,000. This pump can be easily carried on the back of a cycle from one field to the other, and is capable of extracting water from surface as well as groundwater sources.

As the intensity of solar power varies across the day, these pumps have variable discharge. Even at peak hours, the discharge is almost 2.25 liters per minute from a depth of 2.5 meters from the ground level. Therefore, these pumps are primarily used to fill up a tank of water of capacity 500 liters and then used to irrigate the crops by either using drip irrigation or manually using buckets.

The average size of farm irrigated using these solar pumps is 0.6 acres and the time taken to irrigate these plots is roughly 6-7 hours. Usually, the field is not irrigated in one day, and adoption of two or three vegetables makes it easier for farmers to irrigate respective crops on alternate days.

It is interesting to note that farmers using these methods are first time irrigators, who have no prior experience in irrigating the farmlands. Using furrow, and not simply flooding their field with water is therefore a significant boon for on farm water management for these farmers. This is easier using small solar pumps compared with large pumps.

The pumps have helped farmers to cultivate vegetables such as cauliflower, cabbage, brinjal, tomato, bitter gourd, beans, etc., during the months of August to November and the pump is used for 28 hours per crop for the entire season on an average. The average size of the farm for cultivating these vegetables is 0.1 acres. 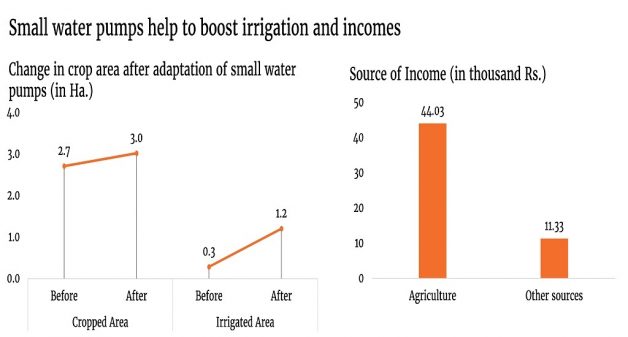 On the other hand, during Rabi (winter) season in February-March, these pumps are being used for growing similar vegetables till the month of March, for over 75 hours per vegetable for the entire season. As there are no operational costs, the pumps provide free access to groundwater and therefore are utilized much more in winters. Banana plantations on an area of less than 0.1 acre per farmer are being solely irrigated by using the small solar pumps.

The study shows that compared with electric pumps, these solar pumps provide adequate supply of water for vegetables. On the other hand, the higher capacity electric pumps lead to overuse and lower gross cropped area in one year compared with these smaller pumps. In the first year, the annual income of the small solar pump users is at a figure of Rs 50,000 by adopting vegetable cultivation.

As the technology is still new to the people in the area, it is difficult to immediately enhance income. However, this has helped curb migration among the participants. Almost all farmers interviewed said that they derive much more satisfaction now, having to water their crops all day, and then sell them in the market.

Although these pumps are still not viable for small farmers without a subsidy, if they are provided at prices lower than small diesel and electric pumps in the market, they could be a preferred choice. With some farmers complaining about the water discharge being low, system designing could be promoted by providing subsidies on these specific models of solar pumps.

Considering the potential these pumps have for small and marginal farmers in remote areas, where it is not possible to have electricity connections, determining the requirement in terms of pump size would help increase their income significantly.

Can these pumps, which provide marginal tribal farmers with access to clean energy, be used by the water-abundant locations in the eastern states, where groundwater usage for irrigation is still low? Rather than aiming for setting up large arrays of solar panels, can small two panel structures, which are easier to handle, be used to increase the engagement of farmers with their own land rather than migrating to other parts of the country? In the light of the government’s goal of doubling farm income by 2022, these small capacity solar pumps can be significant contributors.