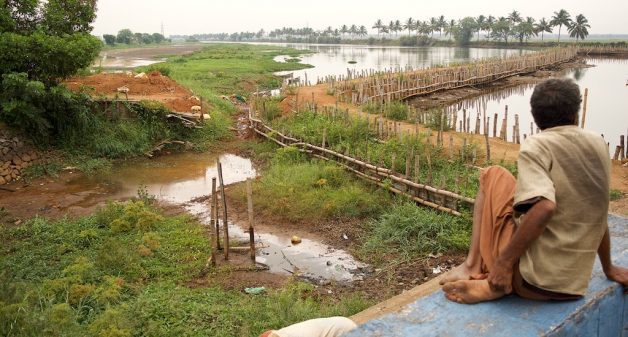 The vast expanse of water has degenerated into smaller water patches upstream of the Enamavu barrage. (Photo by S. Gopikrishna Warrier)

The severe drought of 2017 has dealt a double whammy to the farmers growing rice in the Kole paddy lands of Thrissur district in Kerala. While the inadequate supply of freshwater through the rivers and the canals have left their fields dry, improper barrage management at the estuarine mouths has caused saltwater to move inwards into their fields.

Spread over 13,632 hectares in Thrissur and Malappuram districts, the Kole wetlands are designated a Ramsar site of unique ecological and biological importance. The rice farmers in the paddy fields of Kole get a high harvest, and it is believed that the word Kole was used initially in the Malayalam sense of the word of a bumper harvest.

Of critical importance to this high productivity is the interface and balance between the fresh water brought into the system by Kechery and Karuvannur rivers draining the lower slopes of the Western Ghats and the saline estuarine water mixing at the river mouths due to tidal action. A network of barrages across the rivers at the edge of the estuary serves to maintain this balance.

Dry saline fields in the antithesis of what the Kole ecosystem signifies. Here the freshwater stands till August after it starts raining in early June, while the salt water stays in the estuaries due to the fresh water push and the regulation through the barrages. A study on the Kole ecosystem carried out by the College of Forestry, Kerala Agriculture University, states that the Kole fields are low-lying tracts that are 0.5 m to 1 m below sea level. These are low-lying plains running parallel to the coast, which have been filled in with alluvial soil brought in by the rivers.

The Kole fields are of significant importance to Kerala since it signifies 3.2% of the gross rice area in the state. The higher productivity in the Kole ensures that its share vis-à-vis the total rice production in the state is disproportionately higher. It provides livelihood to thousands of farm families and fishers. There are 172 Kole farmers’ associations that work their agricultural lands in the ecosystem. 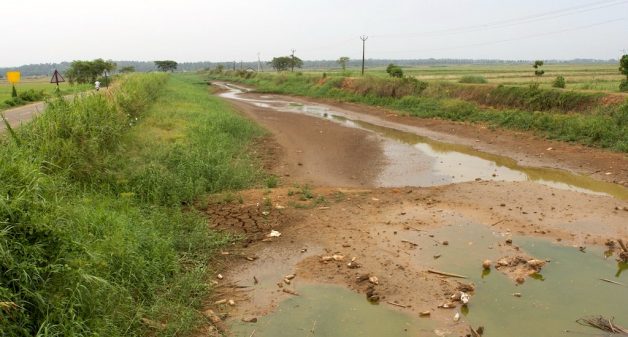 “In Venkitangu area, some of the Kole fields have given up to 3,200 kg of paddy per acre (7.904 kg per hectare),” N.R. Unnikrishnan, secretary of the Kizhakke Karimbadam Kole Farmers’ Association, told VillageSquare.in. “This had dropped to below 2,000 kg per acre due to the drought and salinization.”

Considering that paddy can yield up to 60% of its weight as rice, Unnikrishnan’s figure would mean a rice yield of 4,750 kg per hectare in Venkitangu. According to Kerala Government’s Economic Review 2016, the state’s average rice productivity is 2,790 kg per hectare.

A deficit southwest monsoon in 2016, followed by a near-absent northeast monsoon has caused a drastic drop in the flow of fresh water into the system. With upstream reservoirs going down to their dead storage water levels during the harsh summer of this year, the authorities first rationed and have now almost stopped releasing fresh water into the system. Since the truant monsoon played havoc with the calendar for opening and closing the shutter of the barrages, there has been an inward movement of saline water into the paddy fields adding to the agony of the farmers.

“This is the worst, long lasting drought that I have seen in my lifetime, said M.R. Mohanan, president of the Manalur Kole Farmers’ Association. “Even though we have had droughts before it did not last this long and was never so severe,” said the 62-year-old farmers’ representative.

The erratic monsoon caused confusion in the barrage management calendar, which in turn caused the ingress of saline water from the estuary. “Even though the southwest monsoon did not live up to the expectations the farmers and the irrigation department authorities expected the northeast monsoon to be normal, and thus did not take the necessary precautions,” said K. Manoj, a software professional who is also a Kole farmer and a birdwatcher.

To prevent salt water from coming in during the dry season, the irrigation department constructs a temporary earthen bund (embankment) on the inner side of the barrages. In 2016-17 these bunds were not constructed on time, adding to the problem. For instance, at Enamavu where the largest barrage in Thrissur district is located, the earthen bund was constructed only by February, whereas it should have been up by December, Mohanan said.

“The construction and breaking of the earthen bund is an annual feature at the expense of much money. But unfortunately it is not done taking into consideration the special requirements of each year,” said Mohanan. “This year we have petitioned the irrigation department officials and the district collector to let it stand till the time there is enough evidence that the monsoon is going to be normal.” 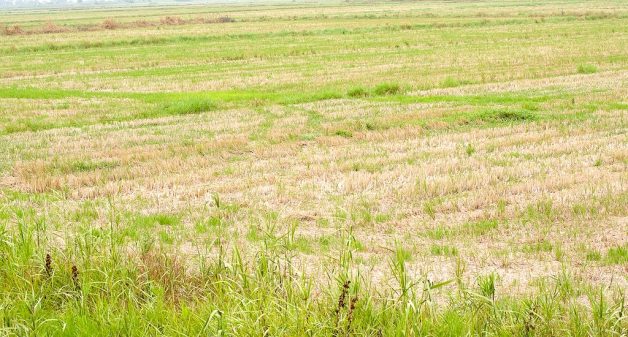 Some of the farmers want the bund to be a dynamic structure whose height and water flow can be controlled according to the requirement of each year.  “We had suggested that the top layers of the bund be made out of sand bags, so that it can be removed and added as and how required, without breaking the bund every year,” C.V. Vasanth, a resident of Enamavu and a public works contractor, told VillageSquare.in.

“Every year good soil is brought in for the bund and then later it is broken and the soil is flushed into the sea. Expensive and precious soil is lost in the process every year. An alternative method has to be worked out to stop this build and destroy cycle every year,” added Unnikrishnan.

Protecting the Kole ecosystem also means protecting the water sources of the adjoining habitations, because of the strong positive impact that these wetlands on the percolation of fresh water to the aquifer. Traversing from the ridge height of above 1,000 metres to the sea in less than 150 km, the rivers in Kerala flow quickly. The natural structures such as the Kole wetlands help slowing the water and recharging aquifers.

“The Kole wetlands are a dynamic ecosystem where environmentally sound human interference is necessary” observed P.O. Nameer, head of wildlife research at the College of Forestry, Kerala Agricultural University, Thrissur. “Due to the agricultural practices an ecosystem has been created in the Kole wetlands. This has a high biological diversity and also supports high productivity in agriculture.”

The key to the preservation of the ecosystem is the protection of the balance between fresh water and saline water. The current drought has threatened that balance.