Once we realize that one size does not fit all, it will be easier for the government and civil society organizations to tailor strategies to manage water in the different agro-climatic regions of the country that truly benefits the rural poor 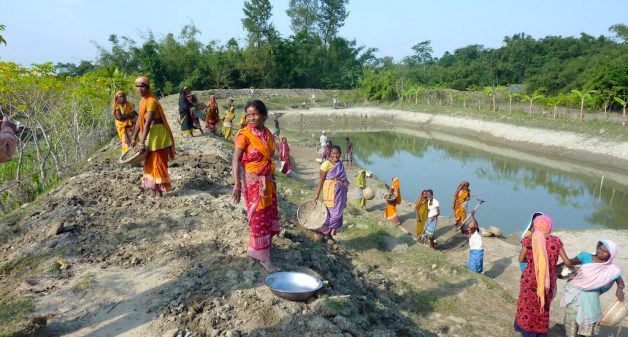 Farm ponds to harvest and store rainwater could be an optimal solution in some places. (Photo by Aftab Alam)

There are arguably three basic types of rural poverty in India. The first and perhaps the stickiest is the poverty prevalent in the flood-prone regions of the country. The population pressure in these areas is extremely high — often above 1,000 individuals per square km — and land parcels are small. The annual visit of the scourge of floods routinely ruins the Kharif or monsoon crop and reduces the length of crop calendar available, besides eroding and damaging riverine as well as low lying land. Here the issue is to control the water of the flood.

The second type is prevalent in the vast drought-prone regions in the country, whether they are the desert-like regions in Saurashtra and Rajasthan, or the huge rain shadow areas in some 50 districts in Tamil Nadu, Karnataka, Andhra Pradesh, Telangana, Maharashtra and Madhya Pradesh. Here the poverty arises despite much larger landholdings because the quantum of rainfall is low (often less than 600 mm in a year), there is a huge variability in rainfall and aquifers have run dry. The issue here is to harvest, conserve or otherwise control whatever water is available and to put it to its best use.

The third type of poverty prevails in the central Indian tribal heartland, which includes some 100 odd districts that run eastward from Sabarkantha in Gujarat up to perhaps Purulia in West Bengal, generally lying between 18 and 25 degrees north of the Equator. Here the terrain is hilly, undulating or mountainous (UHM), there is a green cover of varying quality on the hills and rainfall is decent (between 900-2,000 mm). There are numerous streams that flow in monsoons and retain water till February or March.

The tribal people who live in this region have typically poor quality lands on the slopes or uplands in any village and have little access to irrigation. All the water that these regions get due to abundant rainfall simply flows rapidly downstream to the plains below, leaving the tribals high and dry. The issue here is to help these farmers use more of the water, which nature gives them, by adopting a range of harvesting techniques.

In all the three cases, if we achieve reasonable control on the quantum of water that is received by the poor people, then they would clearly benefit. Naturally, a slew of other interventions such as building flood resilience in the flood-prone and drought resilience in the drought-prone regions, and improving the availability of the appropriate cultivars of suitable crops are also needed to make the people cope with life, but water control surely tops the necessary anti-poverty measures.

While this is the situation, the attention of the government machinery is not towards achieving such water control. When seen in terms of investments and government expenditure, a great deal of money is spent in the flood plains on maintenance of embankments and in flood relief. What we perhaps need more is long-term investments in flood resilience, recovering waterlogged land and maintaining drainage-cum-irrigation channels.

In the drought-prone regions, the attention tends to be focused on construction of more dam and canal systems on whatever rivers that drain these regions. These have issues of displacement and rehabilitation, siltation, poor canal maintenance, the usual head-tail confrontation, etc. While some efforts have been made by way of participatory canal management, their success is to be seen in exceptions rather than the rule.

This is where it makes much greater sense to dig and deepen all channels in the celebrated doha model of Marathwada than to build dams and canals. And the success of this has been shown in Jalyukt Shivar in Maharashtra, which saw lower use of water tankers in Marathwada this year due to additional quantities of water harvested and conserved.

In the tribal heartlands, the trick perhaps lies in exploiting every possible stream for its potential for providing irrigation by diversion rather than damming, by creating pools in the stream by deepening them and by much greater but judicious exploitation of largely underutilized groundwater sources. The last is to be done by encouraging use of small capacity pumps including solar pumps, by encouraging a combination of pump-overhead tank and drip systems, and by promoting divisibility in pumps thru water or pump rental markets.

But here the problem is not only of water control but also of training the tribal farmer to become a good agriculturist, by strengthening agricultural extension systems and by weaning them away from cereal crops, which guzzle much more water than needed, for higher-value fruit and flower crops.

One size does not fit all

The difficulty lies in the fact that everyone becomes a prisoner to a set, pre-determined interpretation of words and a highly restricted channel of thinking and action. Irrigation and water resource development tends to be interpreted almost in the same way irrespective of the agro-climatic and social contexts. The specific strategies appropriate to flood prone areas are different from those that are appropriate to UHM terrains with high rainfall. Yet the mores of thinking and operating procedures, threshold unit levels as well as cost norms for the two perhaps remain the same. Thus while India gets adequate rainwater to realize the dream of har khet me paani (water in every field), the difficulty lies not in the field or in the technology but chiefly in mindsets and approaches.