As part of the Satyamev Jayate Water Cup 2017, over 1,300 villages in drought-prone areas of Maharashtra are creating water-harvesting structures to overcome chronic water scarcity, particularly during the hot season 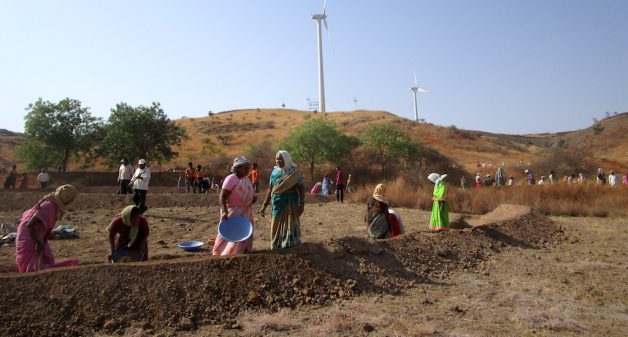 Kiraksal village is in Satara's most drought-prone Maan taluk. Villagers are following the ridge-to-valley method of watershed works. (Photo by Nidhi Jamwal)

Exactly a year ago, armed with iron rods and spades, a group of residents of Nigadi village in Koregaon taluka (administrative block) of Satara walked upstream to the neighboring Kanerkhed village. One after the other, they broke down all the 30 bandhara (earthen check dams) that villagers of Kanerkhed had constructed on a local stream to harvest rainwater. The seasonal rivulet, originating from the nearby hills, used to flow down from Kanerkhed village to Nigadi, meeting the latter’s drinking water and irrigation needs.

“Last summer, we faced acute water scarcity. Forget irrigation, we had limited water for drinking purposes,” reminisced Santosh Krishan Jagtap, a resident of Nigadi village. “When we heard that Kanerkhed residents had constructed 30 bandhara on the local stream, we feared no water would flow down to our village. Hence, we broke all the bandhara,” he told VillageSquare.in.

However, a year later, there is a complete change of heart of over 1,100 residents of Nigadi, who are now busy constructing bandhara and other water harvesting structures to drought-proof their village. And, the credit for this volte-face goes to Jaigaon, another village further upstream of Kanerkhed.

Till last summer, Jaigaon, like Nigadi, was gripped with water scarcity. But, rather than waiting for the situation to get worse, its residents adopted watershed management works. “Till 2015, Jaigaon was a well-known tanker village. We used to regularly hear stories of fights over water among its residents,” said Sachin, another resident of Nigadi. “But, last April and May, villagers did shramdan to carry out watershed works. This year, even in peak summer months, Jaigaon has 24×7 water available in all its wells. We are amazed at its transformation.”

Compartment embankments ensure water from farmland does not wash away but recharges the groundwater. “We have completed 10 hectares of compartment bunding and will finish another 40 hectare by May end. Apart from constructing series of loose boulder structures on the local streams, we have also planned 2 km of road water harvesting,” Sachin told VillageSquare.in. Loose boulder structures slow down the speed of water flowing down the hills and also control soil erosion.

Nigadi residents are also constructing a unique bandhara using discarded one-liter plastic bottles. Put together, all these water-harvesting structures will recharge the groundwater, which the villagers claim will raise water table in the dug wells and hand pumps. “Next summer, like Jaigaon, we, too, will be a paanidaar (water-sufficient) village,” said Narayan Shankar Jagtap, a 75-year-old retired army soldier and resident of Nigadi. 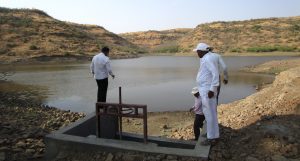 This large pond in upstream of Velu village in Koregaon taluk was constructed during the worst drought of Maharashtra in 1972. A perfect site, it has catchment area of 4-5 km. It has water through the year. All new ponds in the surrounding areas have gone dry. (Photo by Nidhi Jamwal)

Nigadi isn’t the only village in Maharashtra trying to drought-proof itself. Over 1,300 villages in 30 talukas of Maharashtra are at present creating water-harvesting structures to drought-proof themselves. These villages are participating in a unique competition on watershed management instituted by the non-profit Paani Foundation.

Between April and May this year, the residents of 1,300 participating villages are creating various water harvesting structures in keeping with the ridge-to-valley approach. A technical team would assess these structures and the three best villages will be awarded on August 15.

Apart from learning to read contour maps, villagers have been trained to construct various water harvesting structures, such as earthen dams, loose boulder structures, CCT and deep CCT, compartment bunding, etc. The principle of ridge-to-valley is the basis of these trainings held in February and March this year.

“As part of watershed management, works should begin from the ridge and then come downwards. This ensures no soil erosion and benefits the entire village,” said Rajendra Pawar, village chief of Pawarwadi village in Koregaon taluka, who attended one such training program.

Several village women have been trained, too. “After this training, we are confident that we can drought-proof villages receiving as little as 300-400 mm annual rainfall,” Shubhangi Mahendra Phatare of Kumte village in Khatau taluk, which is participating in the Water Cup 2017, told VillageSquare.in.

Unlike government program, training of villagers is the most important element of the Water Cup, as local villagers have to be involved actively in drought-proofing their villages. “Villagers create and maintain the structures and, thus, have a strong sense of ownership,” said Abha Laad, an organic farmer from Koregaon taluk. He is also a coordinator with Paani Foundation.

The gram sabhas of all 1,300 villages participating in the competition have passed resolutions to adopt watershed management. Majority of the works are being done through daily shramdan. “Only for deep CCT and cement bunds, we are using machinery. Rest is villagers’ voluntary labour,” said Uddhav Katkar of Kiraksal. According to him, the residents of Kiraksal have already done shramdan worth Rs 25-30 lakh.

According to Rajendra Pawar, sarpanch of Pawarwadi, enlisting the entire village’s participation was crucial to undertake watershed works. “Hence, before starting the works, we daily used to have a prabhat pheri informing villagers about watershed works planned for the village. Once convinced of the benefits, villagers came forward for shramdan in hundreds,” Rajendra told VillageSquare.in.

“As part of CCT works, I am digging trenches on the hill slope. These trenches will hold rainwater flowing down the hills and recharge groundwater,” explained Tai Pandurang Kadam, a resident of Pawarwadi. 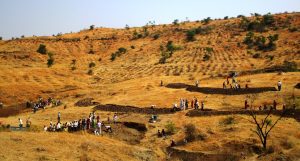 Villagers of Pawarwadi building earthen check dams and digging continuous contour trenches. It is important to work from ridge to the valley. (Photo by Nidhi Jamwal)

Whereas majority of the Pawarwadi villagers (at least 450 at one time) are doing shramdan in the mornings, a group of young men have formed a team that works in the night with the help of torches and lanterns.

Pawarwadi residents have also opened a separate bank account for watershed works. “We have collected voluntary contribution worth Rs seven lakh from people living in the village or outside. We haven’t sought any funds from the government,” said Maan Singh, resident of Pawarwadi.

A couple of kilometers away from Pawarwadi, Navibudruk village is also participating in the Water Cup 2017. The villagers have formed 21 groups and distributed watershed works among themselves with daily targets. “On April 20, we had our annual village mela which had various programmes, orchestra, etc. We willingly cancelled it and used its money for water works,” informed Rahul Nikam, sarpanch of Navibudruk.

Prakash Nikam, another resident of Navibudruk has come up with a special prize offer to ensure maximum shramdan. “At the end of May, we will do a lucky draw of villagers who complete all 45 days of daily shramdan. I will give a refrigerator to the lucky winner,” informed Prakash. There is also a second and third prize of fan and mixer respectively, which has been announced by the village’s self-help group.

This is the second year of Paani Foundation’s Water Cup initiative. Last year, 116 villages in three talukas of Maharashtra participated in the Water Cup 2016. Velu village in Koregaon taluk was awarded the first prize. “Through watershed works, we saved 281.69 crore liters of water and have become a tanker-free village. We are doing more watershed works to ensure we have sufficient water for both drinking water and irrigation,” Navnath Bhosle, resident of Velu, told VillageSquare.in.

As per Paani Foundation’s estimate, the villages participating in the last water cup created a water storage capacity of 1,368 crore litres that is equivalent to 1,368,000 tankers of water, or Rs 272 crore worth of water savings.

This year, over 1,300 villages in 30 drought-prone talukas of 13 districts are participating in the Water Cup 2017. Water savings are expected to be immense. “The Water Cup is only a means to connect the rural people to their traditional wisdom of water harvesting. By training them, we hope to empower them so that they bring their own water,” said Laad.

Nidhi Jamwal is an independent journalist based in Mumbai.