Small fishers on the Kerala coast venture out in the rough Arabian Sea during the monsoon season for a living, but there’s very little help they get in the way of easily accessible forecasts 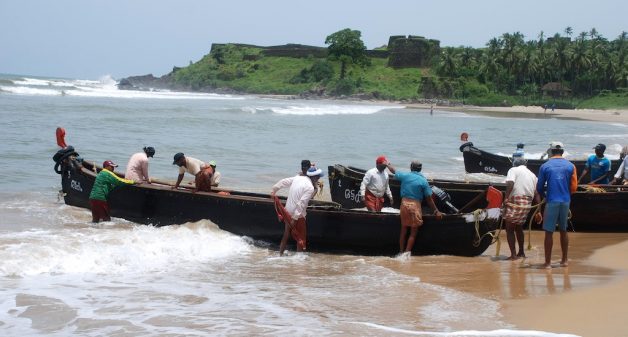 Fishing in the Arabian Sea in small boats during the rainy season can be extremely hazardous. (Photo by Frank Raj)

The aircraft descends through cotton-wool clouds and the emerald canopy of coconut palms, over a golden strip of sand. Arrays of boats are docked on the shoreline, crests of waves marking white streaks over a turquoise Arabian sea against an ominously grey sky. Landing in this southwestern coastal city of India is a magical experience.

On the tarmac, you can hear crashing waves and smell the sea breeze. It is the rough sea during the monsoon season starting on June 1. The marine weather forecast is nothing short of scary with northwesterly wind touching 30 km an hour, and waves 10 feet. The India Meteorological Department (IMD) has been issuing alerts over the past few weeks about westerly winds of 45 km to 55 km an hour. The sea is overcast, and you can see only five to seven kilometers around.

It is dangerous to fish.

Still small boat fishers go to the sea with no precaution. There have been at least 12 serious boat accidents this season. The risks are many. Sudden weather change, heavy rain, strong wind, high waves, lighting and lack of visibility — the monsoon season is dangerous. There are also instances of boats running out of fuel, developing engine snags, and straying into shipping channels.

At Shankhumukham, a coastal village close to the airport, teenage fishers are on a day off. They don’t trust the forecast when a journalist colleague tells them about it. “Chetta (brother), what’s the height of the waves here? ” one of the teenagers asks, pointing at the sea beyond the line of shore waves. The journalist makes a mobile phone call to a source, a sailor in a regional shipping line, and relays his reply: “It is very rough, up to 12 feet.”

“Then maybe we should not go?” the teenagers look concerned. Nobody seems to tell them these things.

Thiruvananthapuram, the capital of Kerala, has one of South Asia’s biggest concentrations of artisanal fishers living in 42 coastal villages. They are known for fishing skills and wooden rafts, canoes and small boats that are powered with small but powerful outboard engines. They often go far offshore often without any navigational aid, radio communication or safety gadgets.

In the absence of easily accessible marine weather forecasts, a culture that encourages risk-taking as part of life adds to the problem.

The fishers say that the monsoon brings more fish to the coastal waters — possibly because the rains wash down nutrients from inland along rivers that reach the sea. In Kerala, rivers run westward from the Western Ghats mountain range on eastern border of the state.

“We get good fish,” says a 50-year-old fisherman from Puthukurichy, a coastal village about 20 km north of the airport. He packs the measure of risk involved in it in an inimitable Malayalam phrase: “Randum kalpichulla pokkanu.” It roughly translates as “you don’t know which way it goes.” He explains it plainly, chiseling off all adjectives as if in an Ernest Hemingway story: “You can die… Or you can come back safe.”

“We have to fish,” the fisherman told VillageSquare.in. “Many of us don’t go very far, and confine ourselves up to a distance where we can see the shore. But some go; they don’t care.” 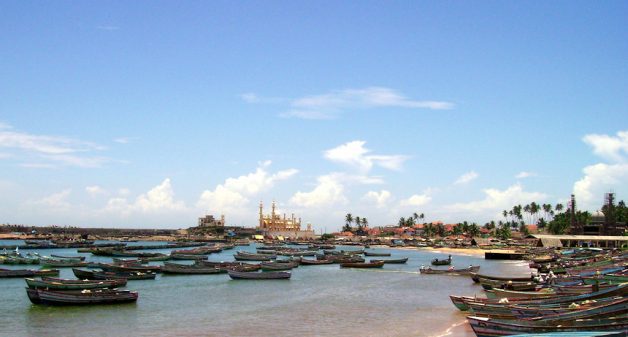 A younger fisherman says he has escaped from a boat capsize incident. “Close to the shore, if you are a good swimmer you can make it.” If you are a bad swimmer, it is just bad news.

This kind of balancing of phrases — and fate — sounds usual amongst the fishermen here. They talk about life and death in the same breath.

What precautions do you take? A life jacket for instance…

What if there is a boat capsize offshore?

“If there are boats around, they will rescue you.”

Fishing in the rainy season here looks like a matter of faith — in yourself, the sea, and God. The fishers never say that, but they are believers, mostly. It is evident from the names of the boats in Kerala, religious symbols the fishers wear, and weekly gatherings at places of worship. Religious figures of all hues hold great power over local communities. Kerala is multi-religious with Hindus forming the majority with large Muslim and Christian minorities.

It is not that technology has not penetrated these God-fearing villages. The outboard engines of some of the boats are powerful enough to take you far offshore in a short time. Kerala fishers have strayed into Sri Lankan waters, some have been rescued off the coast of Maharashtra and Gujarat.

Younger fishers often carry GPS (global positioning system) gadgets that helps them navigate to rich fishing grounds, marking the route to go back again. Often they use mobile phones to find out markets that offer the best price for their fish.

There have been interventions aimed at safer fishing. The United Nations Development Fund (UNDP) funded a project in the immediate aftermath of the 2004 Indian Ocean tsunami. They introduced a set of safety features to small boats — including life jackets, knives, radar reflectors, water, and emergency food stock. The state government even offered subsidized safety kits to the fishers. Still, it is hard to find this kit in small boats of Thiruvananthapuram.

The state government has installed loudspeakers on the coast to provide safety alerts. The equipment was vandalized. “They cut off the wire, and threw away the speakers,” an officer at the state’s Fisheries Department told VillageSquare.in. The fishers’ take is that the loudspeakers blared when they were trying to relax on the shore after a hard day’s work, as they usually do with a drink and a game of cards. It is just not the time to listen to loudspeakers.

Obviously, there seems to be a huge communication gap. Thampi, a fisherman in his mid 50s, told VillageSquare.in: “The sea is a different world. If it is dry here, there could be heavy rain over there. We won’t know that from here. The forecast in the radio is for the land, that does not make much sense. Then they say it might rain or it might not.”

The regular weather forecast in the mass media is meant for the land, largely irrelevant for someone who goes 30 km or 50 km offshore. Except when there is a storm or wind alert. The Indian National Centre for Ocean Information Services (INCOIS) provides detailed marine weather forecasts. However, the dissemination systems are limited to specialized services such as a few coastal community radio stations, mobile phone applications and the Internet. IMD marine forecasts are available over the Internet and VHF (very high frequency) radio used by big boasts and ships — still largely inaccessible to small boat fishers.

INCOIS promotes wider dissemination of their forecasts in collaboration with community media, and IMD marine forecasts are freely available online. The challenge is in putting it all together in an attractive, engaging format and reaching it to the fishers – and, more importantly, ensuring that they listen and take action.

Very few people have managed to do such dissemination effectively to the last mile. Radio Benzigar in Kollam district offers marine weather alerts over their community FM service. Pondicherry Multipurpose Social Service Society has introduced village information kiosks and forecasts over the radio. The Chennai-based M S Swaminathan Foundation has designed a mobile phone application that includes marine forecasts and safety precautions. INCOIS officials favor more such services — for instance, a chain of coastal community radio stations. Officials say it not only helps them reach out to more people, but also get them feedback on the accuracy and relevance of their forecasts.

In a context of coastal fishing stock declining, and fishers going farther and faster to fish, the risk involved in small-boat fishing is increasing. Climate change and variability pose another set of threats including changes in water temperature, precipitation, wind velocity, wave action, storm intensity, and eventually sea level rise and changes on the shoreline.