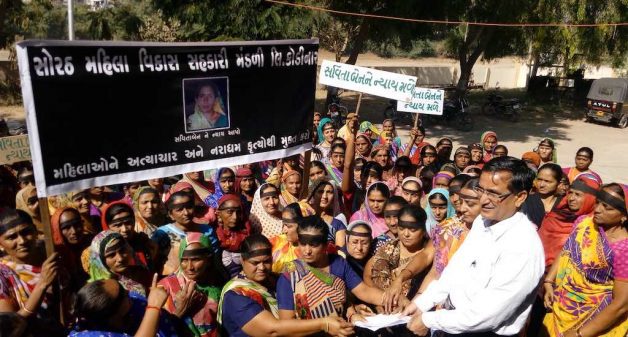 Protesting against the sexual assault and death of a woman, women of self-help groups brought the issue to the police when no one else dared to, and ensured the capture of perpetrators. (Photo by Coastal Salinity Prevention Cell)

“It was time to break the silence against the social evil. We announced that widows would not wear black to please the regressive society we live in,” 39-year-old Motiben said in a resolute voice. Motiben’s voice echoed the sentiments of many women representing the Sorath Mahila Vikas Mandali, an umbrella organization connecting nearly 500 self-help groups (SHGs).

Started as a micro-credit platform like all SHGs, the Sorath Mahila Vikas Mandali (SMVM) created varied income-generating avenues for women of rural Gujarat. But with a plea for help from a young widow, the group transformed into a platform to get rid of meaningless stigmas and ensure social equity and justice to widowed women.

A group of women from Kodinar block in Gir Somnath district of Gujarat came together in 1999 to form a self-help group with the support of Ambuja Cement Foundation. The SHG was started with the objective of encouraging women to get into the habit of saving. The savings were pooled and used for internal lending among members and for clearing bank loans, if any.

As more women joined, the SHGs expanded to 7 taluks (administrative blocks) across the district. The activities of the SHGs increased gradually to include the Sorath Mahila consumer store, onion nursery, spices marketing unit, dairy cooperative and tailoring units, besides production units for soaps, detergents, petroleum jelly and pain palms. The women brought awareness creation and follow-up coordination of government initiatives such as weather insurance and national pension scheme also under their SHGs’ purview.

Seeking new horizons beyond their regular activities, the women decided to work on overcoming the hurdles women in the region faced. The communities in Kodinar include Kharva, Kodi, Kumbhar, Karadiya Rajput, Dalit, Darbar and Ahir, among others. The women of SMVM put aside the caste divide and united to focus on social equity and justice for women.

In the southern part of Gujarat where Gir Somnath district is situated, widows are treated as second-class citizens. They are expected to be in perpetual mourning. They are compelled to wear black dresses and are ostracized from auspicious ceremonies. They are pushed into a hopeless situation due to social customs and beliefs.

The revolutionary change began when Rasilaben from Malgam village lost her husband in a bus accident when she was 24 years old. As an SHG member, she sought the mandali’s help in alleviating the additional agony imposed by the society. Women from SMVM went to her place and presented her with a colorful saree, bangles, nose ring and bindi, everything that are strictly prohibited for a widow. 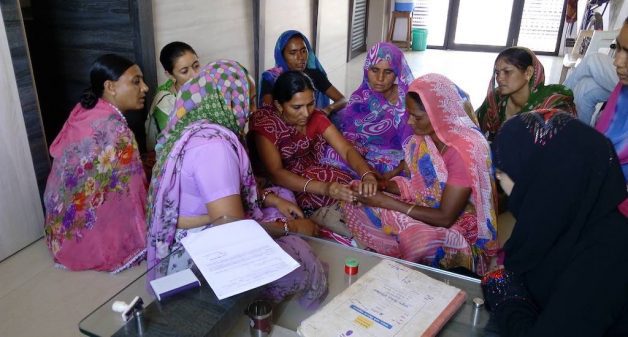 Women gift a widow colorful bangles, saree and bindi once the rituals for the deceased are over, as a first step against social stigmatization. (Photo by Coastal Salinity Prevention Cell)

“Doesn’t she deserve equal right to live like you and me? Happily? It’s time that women are given their basic rights as our fellow human beings. We cannot tolerate the injustice meted out to widows,” 55-year-old Jayaben, a proud member of the mandali told VillageSquare.in.

Considering the sensitivity of the issue, the women-led SMVM decided to change the situation for widows. In 2011 they started the Widow Recognition Program, a unique social protection initiative.

The first joint decision by the women was that there would be no room for caste, community and denominations. They started creating awareness among villagers about giving widows due respect and equality in society. They motivated the family members of a widow to help her lead a normal life and not to impose social taboos.

To overcome this social evil was not an easy task as the community was reluctant to accept the women’s progressive approach. The members faced hurdles in the form of allegations and accusations from the community. But the charges did not deter the women to quit the battle they had begun. They continued their efforts through rallies, community meetings, awareness camps and house visits.

It took four years to see some results of their efforts. The mandali has helped more than 500 widows lead a normal life, with the acceptance and support of communities across 68 villages.

After ensuring social equality and justice for widows, the women of the group went a step further and formed Sorath Mahila Suraksha Kavach Yojna to give them social security.

Most often the widowed women in rural areas face severe hardship due to lack of sources for regular income and find it difficult to sustain their families. The SMVM women brainstormed about this problem and decided to launch a scheme to ensure social security for widows. All the SHGs who are members of Sorath Mahila Vikas Mandali contribute Rs 1,000 annually from their savings. With this money, a fund has been created to help widows who are in need of assistance. The SHGs contribute the amount during the mandali’s annual general meeting.

The efforts have resulted in a fund of Rs 1,00,000 which the women strive to increase with further contribution from SHGs. SMVM has started helping needy widows and provided cheques worth Rs 11, 000. The members believe that in future they will be able to provide economic assistance up to Rs 51,000 to destitute widows.

The women have worked in identifying illegal liquor-brewing thekas, striving for social inclusion of the secluded sections of society and forming social counseling committees to address grievances of members as well as non-members. Timely action and consistent efforts have resulted in bridging the caste divide and ensured women empowerment.

Sorath Mahila Vikas Mandali’s is a voice of its women in unison against social discrimination. Theirs is a journey of hardships and lessons that conveys the necessity to identify and address the problems of women. Their journey also conveys how the collective power of women can bring about progressive change and transform lives. And their journey continues, addressing the everyday problems faced by women.

Palak Gosai is Documentation and Communication Officer at Coastal Salinity Prevention Cell, a non-profit organization based in Ahmedabad, Gujarat. Views are personal.