Breach of riverbanks after torrential rains and water released from overflowing reservoirs flood southern portions of West Bengal, leading to loss of livelihoods and complete disruption of life 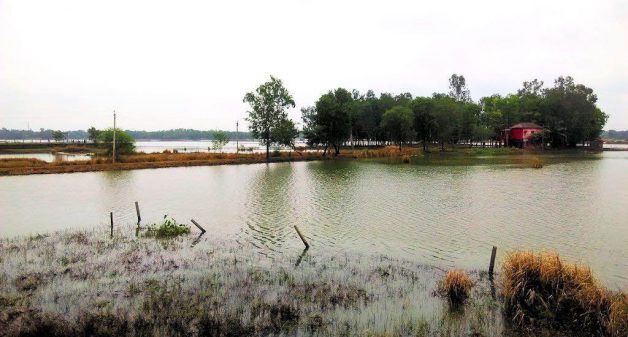 The flooding led to a watery grave for the crops. (Photo by Rajiv Palit)

Chaipet in Paschim Medinipur district of West Bengal lives up to its original Bengali name Chayapath, which means a shadowy lane. From Chaipet, the road to the broken Chandreshwar Khal (canal) becomes narrow and narrower still, before ending in a messy bog, the result of continuous rains and floods.

Incessant rains had led to breach of riverbanks and flooding, Paschim Medinipur being one of the worst affected districts. The floods have affected more than 2.7 million people in 106 blocks of 14 districts of West Bengal this year.

After being inundated for more than a month, villages around Chaipet wear a disheveled look. From July 26 to August 28, the villagers lived amidst a floating pool of filth. The waters have receded but the stench remains. Everything has been ruined — homes, standing crops, fish, power poles — save the villagers’ amazing sense of humor. 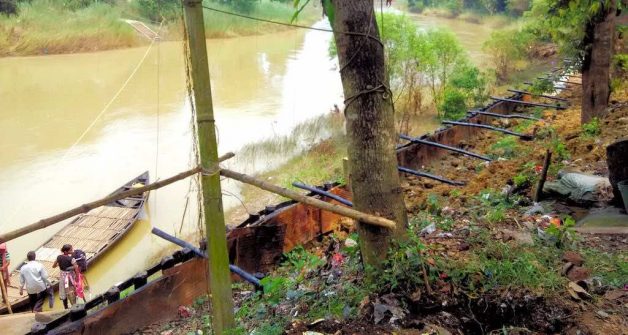 With temporary embankments to prevent further breach, people use makeshift rafts to get around. (Photo by Rajiv Palit)

Five kilometers from Chaipat is the village of Benai, where more than a month after the floods, everything remains under water. “No, not everything,” Preetikona corrects cheerfully. “The waters have retreated from our homes,” she tells VillageSquare.in. “After a month,” she adds with an inexplicable sense of resignation.

The state government opened 311 relief camps, though there is none in evidence in this part of the land. “Maybe other areas are in greater need of relief,” the residents tell VillageSqaure.in.

“Oshur er chul kintay gaylam (went to buy hair for the demon), paid 18 % GST,” grins the local clay idol maker from his wayside studio — a shack with a plastic sheet on it. He is busy applying layers of clay on his straw frame, creating goddess Durga, whose festival is round the corner. The Silabati River running 30 ft below had swirled up in fury to wash away everything — his half-completed idols of Durga, her family and even the idol of the demon she slayed.

He had bought adornments for the deity and a flowing mane for the demon before the Goods and Services Tax (GST) came into effect, as they were less expensive then. All that he had bought and most of what he had made were lost to the floodwaters. He and his assistants managed to save a few frames by keeping them in the loft of his studio.

Bengal’s idol makers earn for the entire year during the festive season. This year there will be no earnings. “All that we will recover is the daily wage. There will be no profit to see us through the rest of the year,” an idol maker told VillageSquare.in.

The local puja committees organize the Durga puja festivals with money raised from the local community. This year they will spend a lot of money on flood relief and cut down on puja expenses, which means lesser number of orders than usual for the idol makers. They might look for work on the fields as farm laborers — only there are no fields to work in this year.

As for the farmlands, not only the 1,400 bighas (one acre equals 3 bighas) of lowland but even the 600 bighas of highland remain submerged. “There stood the paddy that would have fed us the next year,” points out Rabindranath Manna wistfully. Manna owns around 2.5 bighas of land in the nearby Faridpur village. He could not save any of his crops. “Not when the fields have been under water for a month; everything has gone,” he tells VillageSquare.in.

Fortunately he works part-time as a hairdresser and may earn a bit. But most of the other villagers are landless farm laborers with no prospect of work.

The Arit Bibekananda Bidyamandir in Arit that has 1,400 students has just reopened after a two-month break. Sudipto Seth, a teacher of the school, tells VillageSquare.in that the ground floor of the school remained inundated for around a month. A part-time journalist, Seth shows video clips of the state the school was in and of students and teachers coming by country boats to hoist the national flag on Independence Day.

There was a depression leading to torrential rain and gusty winds. River Silabati was in spate. Then the Damodar Valley Corporation (DVC) started releasing waters from its reservoirs in neighboring Jharkhand. It had no option for its own reservoirs were bursting at the seams. Some 1,69,955 cusecs of water was reportedly released on August 20, further inundating villages in Howrah, Burdwan, Bankura, Malda and Paschim Medinipur districts.

Manna recalls how an embankment in Chandreshwar was literally swallowed by the waters in broad daylight and residents who had expected the collapse, capturing it on their mobile phones. 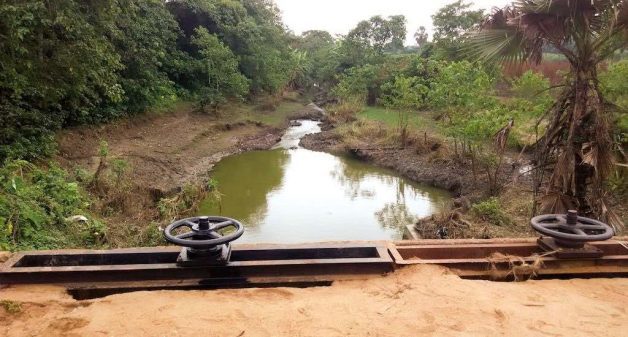 “The floods were made worse because none of the sluice gates was functional for want of regular maintenance. The water that entered had no escape route. People had forgotten the last such calamity that happened some ten years ago, even though every monsoon the waters strike with an eerie, inexorable regularity,” Seth tells VillageSquare.in.

With no roads, people walk to Pratappur, where the Silabati dam breached on the night of July 29. The waters literally gushed in and by morning even double-storeyed pucca houses fell like a pack of cards. There is devastation everywhere.

Yet the villagers smile. Electricity has just been restored in the region. Financial relief would be distributed. Some local boys have been working round the clock to bring food, water, medicine and plastic sheets to the shanties. Shops are back in business.

The people may be indigent but are very well informed. They feel that the Ghatal Master Plan, designed as a flood control measure many decades ago, would have made a difference, had it been implemented.

Aditi Roy Ghatak is a Kolkata-based journalist. Views are personal.