How can we kick-start Make in Rural India? 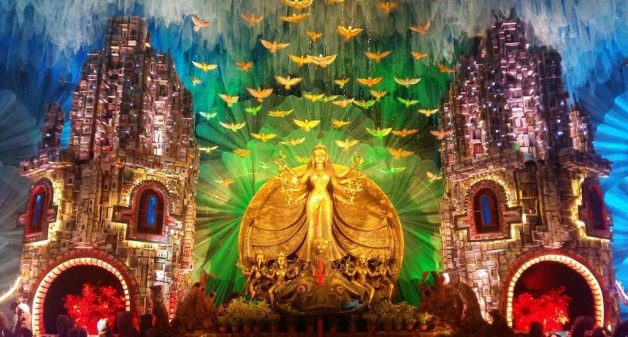 In the run up to Durga Puja, many farmers of Bengal swap their sickles with bamboos and ropes. The hands of the very people who till land and sow crops turn into hands of craftsmen, giving shape to some of the most stunning puja pandals of the state’s biggest festival.

Starting August, the sight of men at work on structures of bamboo and cloth is commonplace. These pandal makers come in hordes to the city from various parts of Bengal, mainly from Paschim and Purba Medinipur, the hub of handicraft and cottage industry, and other districts including Nadia and North and South 24 Parganas, among others. In Medinipur alone, there are an estimated 100 pandal-making groups, also called decorators, who have made a name for themselves, according to leading pandal artist Gouranga Kuila.

Work on the pandal usually starts six to eight months ahead of Durga Puja, right after the contracts are signed in January-February. However, it is only the last one to two months before the puja that work takes on a frenetic pace when the pandal is put together at the site with people working three shifts a day.

The pandals are temporary pavilions that house the deity. A large number of such pavilions are built across neighborhoods in West Bengal during the week when Durga Puja is celebrated.

Most pandal artists have their own teams comprising farmers, masons, carpenters, electricians, painters, etc., who take care of various parts of pandal making such as building the structure of pandal; covering up the pandal with cloth and different material, artwork, painting, and lighting inside the pandal. However, some work with outsourced teams.

Usually pandal artists and makers have no formal training. They are self-taught or learn the ropes from a guru. “Like all traditional forms of folk art that are handed down from one generation to another, most pandal makers have gained their knowledge of pandal making as children working with their fathers or someone who is adept at the craft,” Prasanta Ray, sociologist and Professor Emeritus, Presidency University, told VillageSquare.in.

Kuila, a leading name in pandal art and a native of Purba Medinipur, Birinchibasan village, is one such artist, who has had no training in this area. Born in a poor, agricultural family, Kuila was expected to carry on with the tradition and take on his family profession. “I spent several years working with my father, uncles and brothers on the farm before I chose to devote all my time to art,” says Kuila. “My heart was never into farming and I spent most of my time drawing and creating little artworks ever since I can remember.”

Kuila embarked on this journey 25 years ago. But it was in 2002 that he rose to prominence after winning the National Award for handicrafts. There was no looking back since then for the self-taught artist. This year, Kuila and his 150-member team have worked on four Durga Puja pandals commissioned by some of the oldest and biggest puja organizers — Barisha Club, 41 Pally Club, Mudiali Club and Tridhara Sammillani.

For art, adulation and augmented income

Back in his Birinchibasan village, Kuila’s staggering success has inspired many others to follow suit. Some 200-odd farmers living in and around his village are now doubling up as pandal makers during the puja season. Among them are 26-year-old Karthik Kuila and 45-year-old Tapan Bera of Birinchibasan and Bet Kalla villages, respectively. Both of them are now proficient in different aspects of pandal making including jute handicraft. “We owe our new lives to Gouranga, who took us under his wings. It’s because of him that we are not looked upon as ordinary tillers but artists,” Bera told VillageSquare.in. 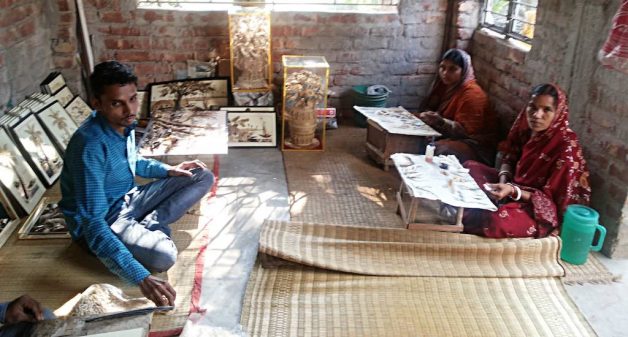 The workshop of Karthik Kulia (Photo by Rajeshwari Sharma)

Other pandal decorators from rural Bengal echo this sentiment. Biswajit Mahato, who hails from Nawadweep in Nadia district, decided to enter this field primarily because of the maan-shomman (respectability). “As a farm laborer, you neither have respectability nor money,” says Mahato, who learnt pandal and idol making mainly from his father. Like every year, he has been stationed in Kolkata with his team of nine artisans from his village for the last two months to complete the five puja pandals that he has signed up for.

“We live for the pujas,” Nayan Metia of Purba Medinipur’s Kamarda village told VillageSquare.in. “Durga Puja is the time for us to showcase our artistry and improve our standing as an artist,” says Metia, who is snowed under with last minute touches at the four pandals that he has been commissioned with.

For poor artisans, Durga Puja art is more than just a creative outlet. It is an opportunity to improve lives and social status. Kuila says what pandal makers earn during the two-three months of Pujas far outstrips the annual income made from farming. Typically, a pair of hands working three shifts earns up to Rs 1,500 a day with the pandal artist’s fees ranging from Rs 200,000 to Rs 1 million per pandal. An artist of good repute can expect anywhere between Rs 1 million to Rs 2 million per pandal. For the top of the heap, the fees are even higher.

In contrast, annual income from multiple cropping (in this case two crops of paddy, betel leaf and vegetables in between) a farmland of one bigha (a fourth of one acre) would yield a profit of not more than Rs 5,000-Rs 7,000 every four months while a farm laborer makes Rs 120 after toiling hard for a day.

“For years, our main source of sustenance was agriculture but now it is a supplementary income,” says Bera. He recently moved from pandal making to creating jute gift items, which he has always been doing on the side. With jute handicraft, Bera makes Rs 15,000-20,000 per month, with his monthly income going up to Rs 30,000-40,000 during mela season (November-January).

Apart from decent earnings, creative satisfaction and adulation egg these artisans to strive towards improving their artistry and workmanship. The joy of seeing several thousand people standing in long queues to see and appreciate our labor of love is something else, they told VillageSquare.in.

Things are slowly changing for good. While most pandal makers still go back to agriculture or odd jobs after completing pandal work, a few continue to work at different places till Jagadhatri Puja, and even extending up to Saraswati puja in late winter. Also, an increasing number of pandal makers are able to entirely live off this field of work, thanks to a growing demand for designing pandals for weddings, parties and corporate events, reveals Kuila.

The past several years have seen an increasing number of professionally trained artists join the pandal making fray. What with puja organizers roping in arts and film personalities, as well as architects, interior designers and even movie set designers! In a bid to win awards, attract big sponsors and advertisers, organizers are leaving no stone unturned in ensuring that the work remains unique and unrivaled.

Associating with big names in the arts and entertainment industry does not necessarily lead to great work but it surely helps create bigger buzz, draw big sponsors and footfalls at the pandals, say observers. “Most often than not, their role does not go beyond ideation and conceptualization of the theme and pandal design but the tie-ups lead to more eyeballs as they occupy prominent position in the perceptual space,” Ray told VillageSquare.in.

Ray explains why the influx of urban, formally trained professionals cannot overthrow the stronghold of rural artisans. “The urban, formally trained may have an edge over rural peers in terms of experimentation, techniques, use of technology and new materials but more often than not they lack the deep, innate understanding of the fundamental and manual aspects of the craft, intimate experience of nature and an ingenious imagination in the absence of references by way of books, famous artworks and internet.”

Dipankar Chatterjee, head puja coordinator of 41 Pally Club, Haridevpur, concurs. “We have roped in many leading professional artists as well as rural artists for our past pujas and we have observed that rural artists and artisans have exceptional abilities to execute on the ground compared to trained artists.”

“There is a lot of difference between theory and practice. Not all are able to successfully translate that into reality,” he told VillageSquare.in.

Collaboration and not competition

Currently, the pandal art space is seeing competition hotting up as urban, professionally trained artists, including Bhabotosh Sutar, Susanta Paul, Shibsankar Das, Purnendu Dey and Sanatan Dinda, are pulling out all stops to assert their trained sensibility of art. Notwithstanding class distinctions, urban versus rural, trained versus self-taught divide, one can expect to see interesting collaboration between these two groups in the future, engaging audiences to a degree rarely encountered in the art world.

With men migrating for work, women do all the farming work, in addition to arduous household responsibilities of fetching water and firewood, leading to health risks (Photo by Jency Samuel)

The success of farmer producer companies floated across the country, would depend on the company’s relationship with its members and delivering on promises made during the launch