Hiccups of clean growth or wages of stupid policy?

With a strong belief that education would lead the community to achieve sustainable development goals, a night school in Ilami panchayat in Jharkhand educates and empowers women 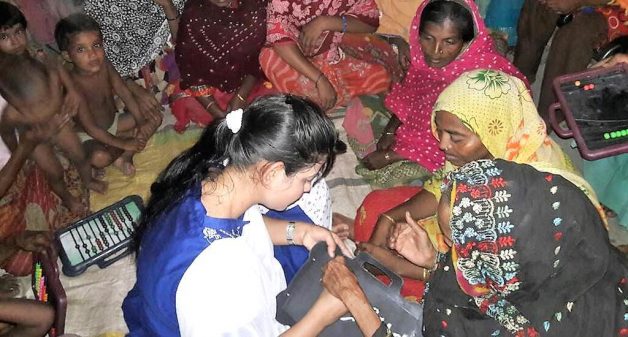 Women of Ilami attend night school as a first step towards overall development. (Photo by Chhandosree)

It is basic education that can help one understand the importance of health, hygiene and nutrition in ones lives and livelihood. Therefore it is natural that education can help communities achieve the Sustainable Development Goals.

Sustainable Development Goals or SDGs, as they are popularly known, are a set of goals initiated by the United Nations to end poverty, hunger and inequality, among others. With the strong belief that education can help them achieve SDGs, Ilami panchayat in Pakur district of Jharkhand has laid the foundation for imparting education to all, irrespective of age.

Spearheaded by the panchayat chief Misfiqua Hussain, the supportive community aims to put Ilami as a developed panchayat in the map of Jharkhand.

While on a visit home, 27-year-old Misfiqua was requested by village women to contest the panchayat elections in December 2015. She agreed to, on the condition that the women would study. She quit the research she was doing at All India Institute of Medical Sciences (AIIMS) after a specialization in medical biotechnology and molecular medicine.

Two years after winning the election and becoming the panachayat chief, she continues to monitor the educational progress of women — right from 4-year-olds to 70-year-olds in every household.

“The SDGs have been set in such a way that if met at the local governance level, we will be developing our region, ultimately adding to the bigger framework at the national level,” said the young mukhiya (leader) while speaking to VillageSquare.in.

According to her, the far-reaching effects of the SDGs are beyond the comprehension of the rural masses, even when the government is committed to meeting the SDGs through various strategies.

“How will an uneducated person living below poverty line (BPL) understand why he needs a toilet or why women should be taken to a medical institution for delivery?” asked Misfiqua. She pointed out to VillageSquare.in that in Ilami Panchayat, around 70% of the population is BPL and around 50% are illiterate. “So education is key to development. Once we educate people they will understand what to advocate for,” she said.

Night school for a better morrow

According to the 2011 census, the population of Ilami panchayat was 9,804, which is now 11,989. The panchayat did a survey on their own in April 2017 to understand the demographic indicators, which reflected the poor status of health, nutrition, hygiene, education, sanitation and livelihood. Misfiqua knew that she would be able to improve on all the indicators when she suggested starting a night school and the older women in the village agreed to join. 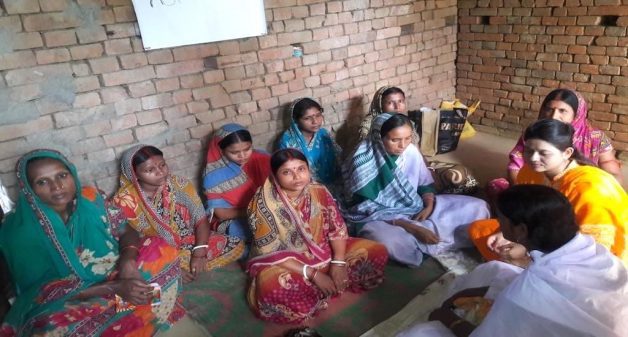 Women of Ilami panchayat learn about health, hygiene and pregnancy care at the night school. (Photo by Chhandosree)

Mehrunissa of Ilami village was one of the first to step into the night school when it was started in April 2017. “Taking lessons directly from mukhiyaji was scary initially. She is highly educated. She was particular that we should attend the classes. Now we understand why she wanted us to study,” the 60-year-old told VillageSquare.in.

When the young and the old women of the panchayat were successfully motivated to be educated, Mission Jeevan, a comprehensive development program to combat problems right from health to agriculture, was launched.

“There are nine targets under SDG 3 on health and well-being. It can be achieved when we start focusing on SDG 4, namely quality education. Through Mission Jeevan we have targeted to bring down malnutrition, improve livelihood, increase institutional delivery, bring down infant and maternal mortality rates, eliminate vector-borne diseases and finally adopting new avenues of vocations within the district by increasing scopes for people in working age,” Misfiqua informed VillageSquare.in.

According to 58-year-old Begum Zeba, women used to give birth at home and hence maternal and neo-natal mortality were high. “After we started night school, our education was not about sentence construction or grammar. Rather we were taught to understand the critical signs in pregnant women that needed attention, need for consuming nutritious food during pregnancy, immunization for children and the like,” she told VillageSquare.in.

The survey done in Ilami indicated that for 3,732 women in the reproductive age group, there were only three auxiliary nurse midwives (ANM) and four sahiyyas (Accredited Social Health Activist worker), which was not enough.

Traditional birth attendants Kajoli Ravidas, Tiloki Ravidas and many others were trained on basic primary health care related to delivery and complications. When they started attending the night classes, they were also trained about care during pregnancy, calculating expected date of delivery, critical signs during pregnancy, cord care, and ways of keeping the baby warm, all of which are essential for reducing the neonatal mortality rate.

Educated adolescent girls joined hands in educating the older women and also in passing on hygiene messages among their friends and other villagers.

“Eight arogya doots (health ambassadors) were selected from among the adolescents to create awareness among the girls and women about healthy habits and break the taboos around menstruation. We have started making sanitary napkins on our own and the elders help us. Knowing that sanitary napkins are more hygienic, one hour in a week is set apart for all women, mostly mothers to learn communication skills so that they can talk freely to young girls and boys about physical changes during adolescence,” 20-year-old Rubina told VillageSquare.in.

The villagers now understand that all the development strategies are to lead a healthy life. At the night classes, they discussed impacts of climate change, adverse effect of chemical fertilizers on the adjacent water bodies around the fields and on livestock and human. This has led to the panchayat adopting srividhi or System of Rice Intensification method of agriculture and using organic manure.

“We have also cleaned the water bodies and doing pisciculture for better livelihood and to bring down deaths due to malaria, dengue and kala azar. Integrated vector management has been started with community participation,” Md Tabrej Alam, one of the residents of Ilami, Informed VillageSquare.in.

“I think, we have sown the right seeds and at least at the panchayat level we will successfully meet many of the SDGs, which in itself will be a research finding,” concluded Misfiqua with smile.

Chhandosree is a journalist based in Ranchi