After men migrate for work, women of Mousuni Island in the Sundarbans in West Bengal have to struggle for survival, losing land to floods and erosion, and livelihoods to salinity ingress 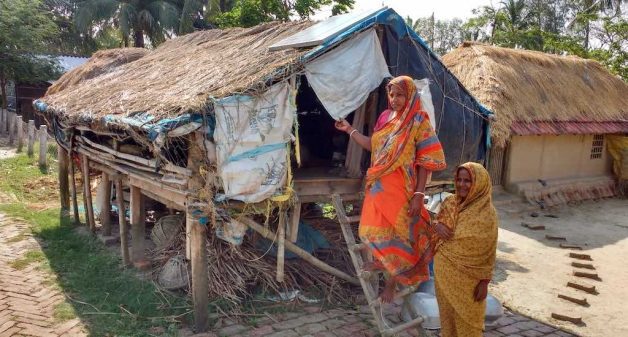 Women who remain on the island after the men migrate take shelter in a stilt house during floods. (Photo by Sayanti Sengupta)

“My land is gone. My house is gone. My husband is crippled. My sons are away. We have no crops, no firewood,” says Manuara Bibi of Baliara village in Mousuni Island in the Sundarbans. “Our lives are meaningless. We have become beggars in our own land.”

Like many others on the island, Manuara Bibi has seen the river taking acres of land. After the floods took the last piece of her house, she waits for the water to subside, in a 6ft x 6ft stilt house, barely accommodating the six remaining members of her family. Her situation is not unique and applies to hundreds like her living on the 54 inhabited islands of the Indian Sundarbans.

The geographical location of islands such as Mousuni make the inhabitants more vulnerable due to floods and embankment erosion, compounded by institutional negligence and human interference. Even as the floods and erosions impact the impoverished inhabitants of the island, it is the women who bear consequences of the hazards the most.

River bank erosion in Mousuni Island is occurring at a rate of 1.02 km per year, wreaking havoc and claiming several houses and farmlands. “Those three huts will be gone next year. We thought the river will take them this time itself, but by God’s grace, they got saved,” Kusum of Baliara tells VillageSquare.in, pointing at the three small dwellings on the edge of the bank. 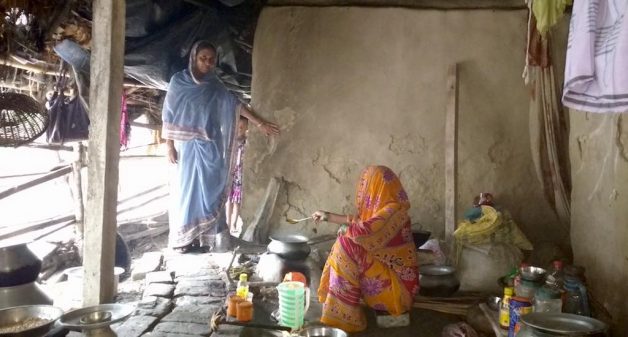 A woman shows the level up to which her house was inundated during floods. (Photo by Sayanti Sengupta)

In Mousuni Island, salinity ingress has rendered agricultural land uncultivable for years. Tidal flooding that occurs twice a month makes it difficult for the salinity level to come down. Embankments, some of which have existed since colonial times, have weakened over the years. It is due to a combination of natural events like floods and erosion and anthropogenic factors such as lack of maintenance and deforestation. These weak, and in some cases, partially built embankments, prevent swift back-flow of the flood waters in some parts of the island, resulting in inundation for an extended period of time.

In such a hostile environment, the men often migrate to seek employment. Our study of 60 households in three habitations of Mousuni Island found at least one male member in each of the households having migrated for work. The women are left behind to look after the children and the elderly.

Cyclone Aila, which hit the island in 2009, resulted in loss of croplands and fishing boats, causing agriculture and culture fisheries take a severe blow. This compelled the men from this area to migrate to the gulf countries.

This out-migration has resulted in rising security concerns for the women, leaving them physically and emotionally vulnerable. “Even his father had to go away. Last monsoon, I was alone when the water rushed in. I had nobody. I just stood in the water clutching my child,” Mamani Maiti of Kusumtala tells VillageSquare.in. “In my island we never saw this. This scares me.” She lives alone with her two-year-old son, after her husband left for Dubai last June.

In order to support the family, the women in the islands look for work, including manual labor. “There’s not much work for us. I carried cement sacks last month, for a house construction in Poila Gheri. They were heavy and I got tired easily. But I didn’t have a choice,” Shikha Guin of Baliara, a widow and mother of two, tells VillageSquare.in.

For a pot of water

Salinity ingress has rendered the homestead ponds saline. For all domestic purposes, including water for their cattle, women in the island are now dependent on tube wells. During our study, we found that on an average, 300 people depend daily on a single tube well.

While some families live in close proximity to a tube well, many women have to travel two to three km to get water, especially when the nearest tube well gets defunct. The women sometimes have to depend on tube wells in schools, off limits during school hours. They often have to queue in the wee hours of the morning to fill up enough vessels for the day, making about six trips on an average.

The situation worsens during monsoons when they have to tread in ankle-deep floodwater to reach a tube well. Often the women wait for low tide, so as to move easily. Speaking to VillageSquare.in, Uma Soren from Baliara remarks, “In the monsoons, we queue for half-an-hour, fill heavy vessels and walk back in the dirty water! Our skin itches. It’s a task to keep from falling down. Sometimes the stored water gets over by early evening. With no lights, you can’t be sure if you’ll come back home alive.”

The island has three flood shelters. Payel Samanta, whose family has been residing in one of them for three years after losing everything to the river, laments how she is ostracized by the others in the neighborhood. “They say we have encroached on property that belongs to everyone. But where can we go? We have nothing left.” Her husband is one of the few remaining in the island, with no means to migrate.

Apart from the physical hardships, the angst that the women go through is aptly described by Rebati Doloi from Kusumtala, “We lost our boat last year. So now my husband tries to fish floating across the river on a big jar. When the water becomes turbulent, I lose sight of him. I feel scared for him,” she tells VillageSquare.in. The fact that he has to catch fish risking his life describes the plight of those who have not been able to migrate for different reasons.

Lack of access to safe sanitation adds another element of risk for the women on the island. With the land not in their name, the women, particularly in women-headed households, it is difficult to get a toilet sanctioned. The ones who do have toilets, still prefer the outdoors. Because toilets without water for flushing is an added drudgery as the women have to make additional trips to fetch water.

During monsoons, the toilets often get submerged for nearly four months, leaving the women with no option but to defecate in the open. All these dampen the construction and use of toilets. As Shiuli Pramanik from Baliara tells VillageSquare.in, “What is the point of having a toilet? It goes under water when we need it the most, during the monsoons!”

Health facilities on the island, for flood-affected families in general and women in particular, remain deplorable. The primary health center (PHC) in the village is highly inadequate, with no electricity. In fact, Mousuni Island is yet to be electrified, one of the last such islands in the Sundarbans.

A pregnant woman has to cross two rivers to reach the district hospital in Namkhana for delivery, often by herself, since her husband would be away making a living. “I am due end of this year. I am praying that my husband comes back before that. How will I manage on my own?” asks 21-year-old Kajol, who is expecting her first child, with her husband in Dubai.

With no access to LPG, the women depend on firewood and are exposed to greater threats from indoor carbon monoxide pollution. Privacy is indeed a luxury for the women in the island. During floods, nearly 10 persons are huddled together in a 6ft x 6ft floor space.

The discourse on the effect of floods tends to look at the affected population as a homogenous entity. The entire population is seen as flood-affected. But the everyday struggles faced by the women in Mousuni show that women are more vulnerable.

It is of utmost importance that one undertakes a granular understanding of how floods and erosion affect the lives and livelihoods of women in flood-prone areas. Accordingly, interventions that would ameliorate the wretched conditions of the women in flood-affected areas need to be promoted.

In Mousuni, interventions towards easy access to safe sanitation and drinking water source would go a long way in ameliorating the miseries faced by the women. Provision of sanitary pads coupled with behavior change communication activities would make a significant dent in the gynecological morbidity faced by the women on the island. An increased number of flood houses with separate sanitation and bathing space for women would reduce the vulnerability that they currently face.

Skill training for women in new activities like prawn culture and rural tourism could offer them an alternate livelihood.