Women in rural Nalanda are popularizing the use of a traditional grinding stone to pound flour out of roasted gram, providing a healthier alternative to machine-ground sattu and earning a livelihood for themselves 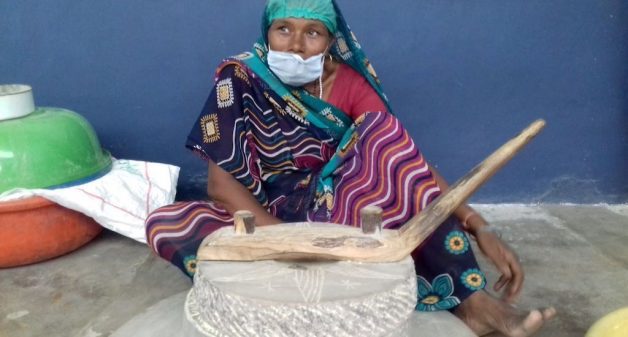 Sunita Devi works hard for about six hours a day, not only to earn her livelihood but also to provide healthful food for the local markets and beyond. Sunita, in her early 50s, along with over a dozen women of Nehusa village in Harnaut administrative block of Nalanda district, use jata, a traditional grinding stone, to make sattu (roasted gram) and earn money with dignity.

In Bihar and parts of Uttar Pradesh, sattu is a popular food item. Several traditional dishes including the popular litti-chokha and kachauri are made with it. People in rural as well as in urban areas drink sattu sherbet during summer. Once known as poor man’s staple food, sattu is costly now, branded sattu being sold at Rs 150 per kilo.

Jata, a traditional grinding stone used to grind dry food items, has virtually become a tool of the past, about to be relegated to the museum. Till a few decades ago, it was an important tool in every rural household. Women like Sunita are giving jata a new lease of life by making sattu with it. This sattu with a traditional touch is called jata sattu.

Sudha Devi, Veena Devi, Amita Devi and Manju Devi belong to a group of nearly 30 women making jata sattu at the common facility center of Khistiz Agrotech Pvt Ltd at Nehusa. “We have installed more than 30 jatas and provide the raw material to the women,” Gaurav Kumar, manager of Khistiz Agro told VillageSquare.in.

After electrification of villages, jatas gave way to electric grinders. “With spices to sattu readily available in markets, there was hardly any use for jata,” said Pappu Sharma, who installed most of the jatas. Even in the houses that had jata, young women hardly used it, though vouching for the superior taste of spices and grains ground in a jata. “One jata costs Rs 1,200. It’s made with a different strong stone to sustain for a long time,” Sharma told VillageSquare.in. “Jata is not available locally anymore. All jatas were brought from outside the state.”

Most of the women working in Nehusa are from Sherpur village, while a few are from the neighboring Kheuari, which is close to Kalyanbigha, native village of Bihar’s Chief Minister Nitish Kumar. Belonging to self-help groups (SHGs), the women are known as jeevika didis (livelihood sisters) since their SHGs were formed under Jeevika, the Bihar government’s rural livelihood program.

In the last 18 months, hundreds of jeevika didis from different parts of Nalanda district have been trained in Nehusa to make jata sattu. Uma Shankar Bhagat, Jeevika district project manager in Nalanda, said making of jata sattu is a livelihood for many women. “The main purpose of producing jata sattu is to provide work to rural women and to supply pure and healthy jata sattu to urban people,” she told VillageSquare.in.

“We get Rs 25 for making 1 kg of jata sattu. We earn Rs 200 to Rs 250 per day,” said Amita, a school dropout. “We clean the gram thoroughly, soak it in water for an hour, roast it lightly and grind in the jata,” said Sunita.

“Production varies from day to day,” said Anita Devi, who is associated with Jeevika. Sunita said that they earned more during winter. “During summer or even during humid monsoons, it is difficult to work continuously and so we can’t earn more,” Sunita told VillageSquare.in. Sunita and her colleagues sing folk songs to speed up their labor-intensive work.

Manju makes jata sattu for two or three hours after finishing her household work. “There are a few like me who work as per their free time to earn some money.” “Before I started making jata sattu, I had to depend on my husband for even Rs 10 to purchase something for myself. Now that I earn, I fulfill my needs as well as my children’s,” said Amita.

Gaurav Kumar said, “We purchase locally available maghi gram, popularly known as dehati chana, for making jata sattu.” It is sold in attractive packs of 250 gm to 1 kg in eco-friendly containers in different stores of Patna.

Bipin Kumar, a Jeevika field official, admitted that lack of market is a problem. “Unless there is a high demand and availability of big market, jata sattu production will not increase,” he told VillageSquare.in.

Anita Devi said that due to lack of market, it was difficult to engage more women on a regular basis. “I am desperate for markets in Bihar, across the country or even abroad to supply jata sattu regularly,” she told VillageSquare.in. “Government should also help us promote it.”

“In urban places like Patna, handmade sattu is rare since jata is no longer in use. So we are trying to promote the jata sattu,” said Bhagat. Jata sattu is used in Jeevika canteen in Bihar Sharif, district headquarters of Nalanda.

“Jata sattu is pure and fresh; there is no chance of adulteration since we handle the packaging also,” said Amita, The women wear caps, masks and gloves to ensure hygiene. According to Bhagat, the heat released during grinding is much lower compared with machine grinding, and hence, the flavor, texture and natural aroma are retained. 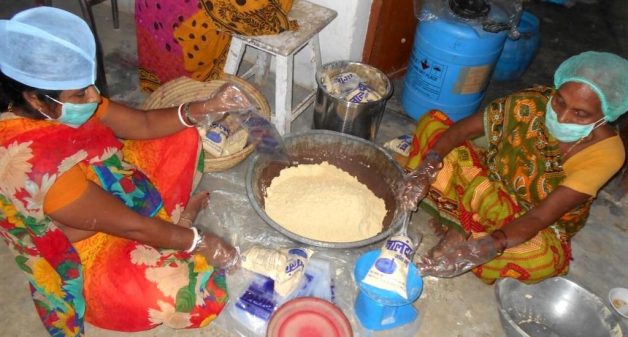 “When sattu is made in a machine, nutrients are lost, but not when made in a jata,” N. K. Singh, agriculture scientist at Krishi Vigayan Kendra, Harnaut told VillageSquare.in. He said that good quality grams produced organically by local farmers are used to make jata sattu. “Use of jata sattu is good for diabetes, constipation and weakness. Jata sattu drink doesn’t cost much and gives instant energy,” reputed physician and former union health minister C. P. Thakur told VillageSquare.in.

According to Kundan Kumar, who as Deputy Development Commissioner of Nalanda initiated the program, before joining as District Magistrate of Banka district, quoted women as saying jata sattu helped them become healthier. “Making jata sattu is the best way of exercise for women, especially for those suffering from gastric or pain-related problems,” he told VillageSquare.in.

Bhagat said many women are engaged in making jata sattu at several places in Nalanda. “Our plan is to engage more women for making it.” Bipin said Jeevika plans to set up jata at different other places in the district for making of jata sattu to create more opportunity for women.”

According to Singh, promotion of jata sattu would benefit local farmers growing gram as they would not need to look for traders to sell their produce. “Jata sattu has been branded Nalanda Sattu, after UNESCO declared Nalanda University a World Heritage Site,” said Kundan Kumar.

Since jata sattu is being made in other districts and will be made in Banka district too, Kundan Kumar said, to sell it, they are in talks with big food chains in metros. “We are trying to sell it online through Amazon also,” he told VillageSquare.in. “We also plan to make jata sattu in different flavors in attractive packaging as a health snack or drink to attract youth to one of the traditional foods of India.”