Flood and drought often drive the rural poor to cities. Those who are landless often stay on. Risking lives under the open sky, they hope a city’s many work opportunities will help them survive somehow 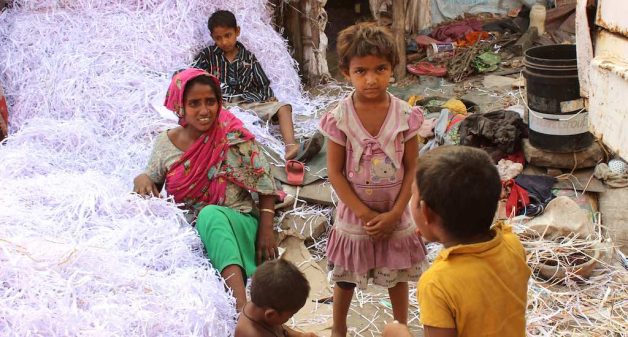 In a roadside ghetto, Akila Bibi and others after a day’s hard work, separating white paper shreds from the colored ones for recycling. Earning Rs 3 a kg, they manage 30 kg to 50 kg a day. (Photo by Manipadma Jena)

As street lights flicker on at dusk, they reveal a tiny signboard tucked among the branches of a mango tree that points to a shelter for homeless women. Inside the dimly lit hall, Gauri Rout sits on a plastic floor mat, staring at the wall, while a young woman stands guard at the door. The women appear to be alone.

As the darkness falls with a nip in the air warning of the winter cold, a few more women, most of them pavement dwellers, walk into the hall with their teenage daughters. “They will be safe here in the night time,” they said.

“We plaster our daughters’ faces black with oil and soot when sleeping on the footpath lest drunken men eye them and carry them away in the night,” Akila Bibi told VillageSquare.in. The 45-year-old has since moved to a canal-side ghetto in north-central Kolkata, eastern India’s megacity. She married off her daughter the month she reached puberty.

“Verbal violence is an everyday occurrence for girls and women and, in the open, worse things can happen,” said Sudeshna Das of Calcutta Samaritans, an organization that works with women street dwellers.

In August last year, the rape and murder of a 12-year-old girl abducted from a central Kolkata pavement made headlines when it was revealed that she had also been gangraped in a moving car by cab drivers. Her body was found floating in a canal and showed she had been strangled to death.

Plight of the homeless

Incidents of violence against women and the homeless prompted a Supreme Court order in 2012 that for every 100,000 city population, one homeless shelters must be built across all Indian cities. During the 2014 bitterly cold winter, over 100 homeless people died in New Delhi. Lack of shelter leads to unnatural deaths during peak summer and winter months when thousands huddle out on the roadside, pavements, in unused drainpipes, under staircases or in temples and railway platforms. 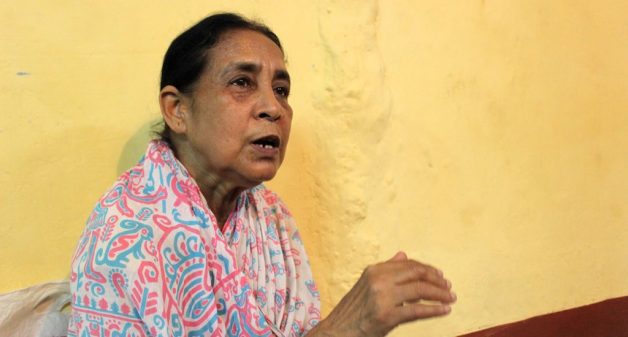 Gauri Rout narrates her life’s journey from a landholding rural household, marriage and finally to a homeless shelter. (Photo by Manipadma Jena)

The central government launched the Shelters for the Urban Homeless scheme in 2013 and the next year augmented it with teaching high-demand skills to the homeless to equip them to earn. Currently covering 790 cities, the scheme mandates one shelter of every 100,000 city population. At the shelters, rules say homeless occupants must be provided basic facilities like toilets, drinking water, beddings and blankets, lockers, first-aid kits, and a kitchen. Through institutional tie-ups with shelters, periodic health check-ups, some medicine cost reimbursement and legal aid too should also be accessible to them. Fifty square feet of space is mandatory for each occupant, an area that can hold a floor mattress to sleep on and a suitcase beside.

However, reviewing the schemes’ implementation over the past years, a Supreme Court-appointed panel headed by retired Delhi high court judge Kailash Gambhir came up with a grim picture for urban homeless people. In August this year, it said over 90% of them have no roof over their heads. “Despite the availability of funds and a clear mechanism through which to disburse them, there is an extremely unsatisfactory state of affairs on the ground,” the judges noted.

The 2017 committee reviewed progress after the central government informed the court that not even half of the Rs 21.85 million released has been utilized by states to build and equip homeless shelters.

According to the 2011 Census, 938,000 people were homeless in India. This is a huge under- estimation according to activists working in the field. At least 1% of every Indian city and town population is homeless, the Supreme Court Commissioner’s Office estimates. India’s urban population is 377 million, according to Census 2011.

“Based on this, 3.7 million (1% of 377 million) are homeless in India’s cities, which means 218,750 shelters are needed across the country,” Indu Prakash Singh, Leader, ActionAid India’s Urban Knowledge Activist Hub, told VillageSquare.in in an email interview, contesting the sub-one million homeless count given by the census.

In Kolkata alone, India’s third largest city, there are no less than 150,000 homeless out of 14.1 million population counted in 2011 in the metropolitan area (Kolkata city together with its suburbs), according to campaigners for the Housing and Land Rights Network (HLRN). But Census 2011 counted only 70,000 homeless, half the actual numbers.

Identifying lower number of homeless results in inadequate shelter facilities being built, campaigners said. Currently Kolkata city population itself is 4.7 million. Activists say that Kolkata has just 33 shelters, but the majority can accommodate only 40 people, not the 100-occupant capacity the 2013 shelter scheme mandated. Very few offer the much-needed referral to health, employment or legal aid services and the majority do the even provide the 50 square feet of space.

Surajit Neogi, spokesman for the urban poverty arm of ActionAid India, told VillageSquare.in that up to 60% of existing shelters in Kolkata are inaccessible to its homeless. A major reason for this is that in West Bengal entire rural families migrate out together. But when they reach Kolkata, there is not a single family shelter. The street is the only place they can remain together, he said.

The difficulties for the city’s street people are made worse by the fact that 14-year-old boys are seen as adults by authorities, so if their mothers are driven out by domestic violence, they are separated from their older sons at shelters, thereby losing a crucial source of support. Kolkata has an estimated 20,000 homeless children, studies find.

Even the 33 shelters in Kolkata and most other cities remain empty mainly because the distance between them and bus stands, railway stations, market depots — areas where the homeless work and find it convenient to live, rather than 10 km to 15 km away, Neogi said. Here work starts at the crack of dawn and runs late into the night. They have neither the money nor the time to spare for the daily commutes.

The latest justice Gambhir’s report also mentions drug addicts occupying many shelters and other homeless avoiding to stay with them. Neogi said family attendants of outstation hospital patients, cab drivers and such like people pay a nominal amount and are illegally staying in several empty shelters. “These locations are on prime land worth several crores of rupees, who will give them for homeless people’s shelters?” asked a Kolkata Municipality Corporation official, requesting anonymity.

Singh says because suitable land for building shelters is becoming a major obstacle, state governments can deploy portable cabins instead, even if for a few next years. Lightweight metal portable cabins are in use in Delhi since 2014 winter.

“The porta-cabins are, however, a temporary measure. State governments should aim for a housing continuum for the homeless — the transition should ideally be from shelters to workers hostels, transit houses and finally to secure-tenure housing,” Singh said.

Activists say flood and drought most often drive the rural poor to cities. Those who are landless among them often stay on. Risking lives under the open city skies, they hope its many work opportunities will help them survive somehow. “But they are virtually an invisible population,” Neogi told VillageSquare.in.

Not covered under food schemes, basic health services, free education that are provided for below-poverty population, even voting rights are denied to them because they cannot provide a proof of residence.

For 55-year-old Rout, a widow who has no family to return to, hunger is also a constant. Police found her sitting under the street lamp for two days and brought her to the Ghaliff Street shelter under West Bengal’s anti-vagrancy laws, shelter superintendent Uttam Bera told VillageSquare.in.

Rout said she skips lunch every other day and at night, staves away hunger pains with a handful of puffed rice and glasses of water. She has no money needed to buy medicine for knee arthritis that makes walking difficult, let alone finding work. And despite being among India’s poorest of the poor, Rout remains deprived of social security that could provide her with subsidized rice or free healthcare.

She can get these only by producing a government-issued identity document. For the government to issue her an identity paper, a proof of residence is mandatory. Rout has none.