Moving beyond toys, artisans in a Karnataka village make curios, and use new toy making and marketing methods to overcome challenges posed by cheap Chinese imports and restore the glory of Channapatna’s non-toxic wooden toys 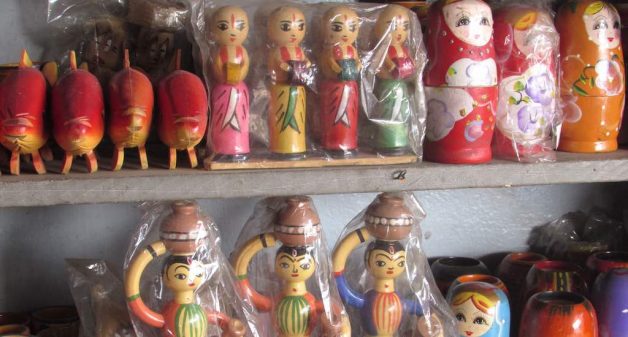 Toys are not mere toys. They are the main livelihood for a majority of people in Channapatna in Ramanagara district of Karnataka. Channapatna is about 60km from Bengaluru on the Bengaluru-Mysore highway. Channapatna toys boast of worldwide market, as these wooden toys are natural and free of health hazards.

The toy making tradition, which enjoys a geographical indication (GI) tag, dates back to the times of Tipu Sultan. During his reign, Tipu received a wooden craft piece as a gift from Persia and he fall in love with it. He is believed to have invited Persian artisans to train his people in the art of wooden toy making.

Toy making has been the livelihood for almost 70% of Channapatna’s population for centuries. Though the place carries the luxury of a patna (city) in its name, it is a small village with narrow, muddy roads, huts and thatched roof workshops. Apart from the numerous toyshops on both sides of the highway that display colorful toys, nothing is colorful about the village, as the villagers struggle to make both ends meet.

Earlier the craftsmen made toys manually. They collected big tree trunks from neighboring villages and forests. Ivory wood was the main wood used for making toys. Its soft nature made carving easy. Its lighter shade helped the toys absorb colors nicely. But continuous logging has made availability of ivory wood difficult. So the toy makers have turned to other alternatives like rubber wood, cedar, pine, besides teak and rosewood occasionally.

The toy makers bring the wood to sawmills, a subsidiary industry here, and cut them into small pieces. They carve the pieces to different shapes, with the help of small tools like hand blades and knives. Then they color the pieces with vegetable dyes and lac — a resin from insects.

Channapatna, with around 72,000 people, has a majority Muslim population. Most of the villagers are engaged directly or indirectly in making toys. Many sawmills and 500-odd toy factories show the higher graph of employment and the way the craft adds to the local economy. 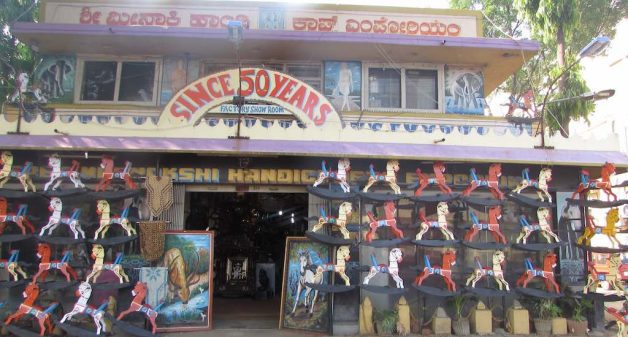 Channapatna toy factories established decades ago double up as showrooms on the road leading to the village. (Photo by Chithra Ajith)

“Apart from this, hundreds of small toy-making units function like cottage industries. All the family members play a role in the toy-making process,” Yasir, a commission agent, pointed out to VillageSquare.in. “They assemble the toys, paint and dry them, and then package them.” Women make small spinning tops, carts and figurines at home.

Gradually small machines have been introduced. This has made the creation easier. By mechanizing the carving and lacquering, the production has become faster. Though the handmade toys have their own beauty, machine-made ones have a perfect finish.

Vassi, who has 30 years of experience, still produces only handmade toys. “We can make 100 small pieces in a day. We work as a group of four. One carves the different parts of a toy and the other assembles them,” he informed VillageSquare.in. Abbas and Gulab who were lacquering and polishing toy trains nodded in agreement. The movement of their fingers showed the craftsmanship they have acquired through years of dedication.

Nothing can beat the beauty of the traditional toys. But modernization and globalization have caused some negative impact on the livelihoods of toy makers. By the wide acceptance of cheap Chinese toys, Channapatna toys had a setback as demand decreased.

“Daily wages are very low. Sometimes we get back pain since we are sitting continuously for a long time. But this is the only job we know and we are happy making toys,” Gulab told VillageSquare.in. But many artisans opted for other jobs as they were poorly paid. They have been hesitant to bring their children into the toy-making business. They saw the middlemen, traders and exporters snatch the profits of the industry while the actual toy makers always struggled to survive. This led to mass migration of Channapatna toy makers to other cities, looking for jobs.

Government implemented many facilities for the development of artisans. But they are inadequate. The Karnataka State Handicrafts Development Corporation (KSHDC) set up a lacquer ware craft complex in Channapatna. It functions as an industrial school and an on-the-job training center. The limited facilities do not address the actual grievances of the toy makers. The lathes installed there do not cater to every artisan. The subsidy the producers get from authorities is also meager.

Demonetization and GST have brought the business down and hence the production. “New policies badly affect the sales,” a shop owner told VillageSquare.in. “Some export orders got cancelled.”

Adding color to a fading industry

Many NGOs and design studios work among the artisans these days. They assure fair wages and markets for the artisans’ products. Design studios inform the toy makers about modern trends and demands. They teach artisans to move beyond toys and to make trays, key chains, bead curtains, pen stands, curios, etc., to face market competition. Designers train the workers to produce new designs according to the demand.

Maya Organic is a livelihood development initiative involved in developing a network of artisans, workers and micro entrepreneurs capable of producing world-class lacquer ware. This NGO has around 15 units. Women form 70% of their work force. They developed the women’s skills and got them to work under one roof with better work environment and wages. 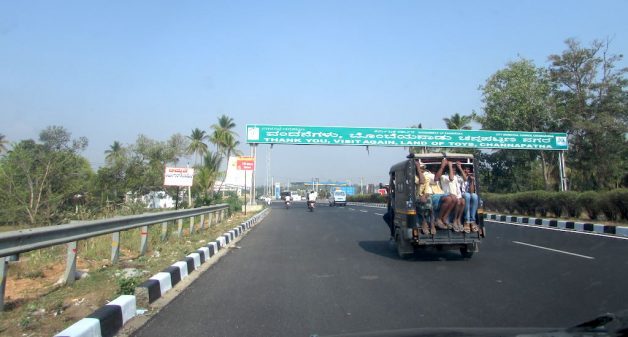 Channapatna is called the land of toys. (Photo by Chithra Ajith)

“We are trying to help Channapatna regain its glory, by uniting artisans and familiarizing them with modern equipment and designs,” Shahida, Operations Head of Maya Organic, told VillageSquare.in. This initiative gives job assurance to the artisans. Maya Organic uses only good quality wood and organic colors.

“Wood and natural colors do not cause any health problems. We can let children play without any fear,” said Gulab. Traditional wooden toys of Channapatna are known for their chemical-free nature. Besides, many studies have proved that the symmetrical shape and movements of these toys increase hand – eye coordination and motor capacities in children. They also develop mental skills.

Proven health hazards hidden in Chinese toys have helped traditional Channapatna toys regain the market in the recent past. Fairs and exhibitions have opened new opportunities. Online marketing has made the products reach global markets. “We have online marketing facilities and export orders from Japan, South Korea, Arab countries and the USA,” said Shahida. The craftsmen get bulk orders for corporate programs, star hotels, and seminars.

With the traditional toy makers now capable of producing any wooden toy and curio according to demand, things are looking up. With support from organizations, the simple, smooth and durable toys like the spinning tops, dolls, carts and rocking horses in shimmering colors find markets and the industry looks to colorful days ahead.