If producer companies that aim to benefit poor farmers are to succeed in India, critical factors such as a sense of ownership, correct assessment of economic environment and social capital need to be better thought out 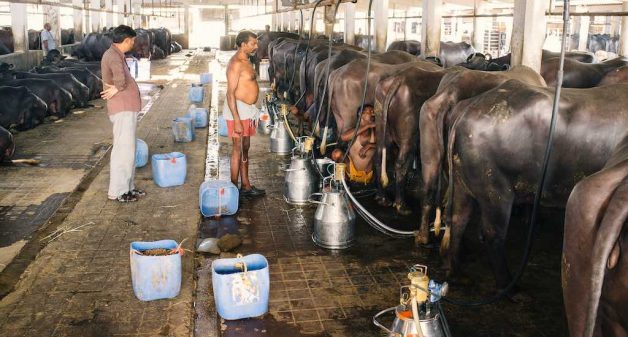 A few dairy producer companies have grown to respectable size in India. (Photo by Premshree Pillai)

These days, most major livelihood promotion efforts, whether in the government or CSO sectors, emphasize setting up collective enterprises of producers. The format of a producers company has become popular for this. Such companies buy inputs in bulk and make them available to members. They also pool, procure or purchase the output from members and undertake organized marketing on their behalf. They may link up with bankers to channelize credit to the members. Finally, they may undertake the task of organizing technology dissemination or extension to members.

The aim of setting up these companies is to enable the group of producers (who together own the company) to get better access to markets. The observed reality is that of the hundreds of producer companies thus set up, a large proportion remains stunted and weak. This raises the question whether adequate care has been taken while setting them up. In my view, the principal cause of their patchy if not disappointing performance lies in inadequate antenatal care in setting them up.

My inference is based on observation and theoretical understanding. Four factors lead me to this belief. The first deals with the fact that a majority of the producer companies are being formed on account of external initiative and often in response to a bureaucratic dictat. The second is the recognition of a major design flaw, often left uncorrected, in the conception of producer companies, which tends to go uncorrected during operations as well. The third connects with naivety of the promoters in their assessment of the economic environment. Finally, the fourth deals with inadequate creation of social capital before the producer company is set up.

The design flaw relates to capitalization. Producers own producer companies. In fact, current provisions forbid any one other than producers to hold equity in them. But, a majority of producers are poor or in any case illiquid. So they cannot contribute any significant amount to the equity of the producer company. As a result, the company continues to have a small equity base.

With that, its ability to borrow too remains limited if the usual debt-equity norms were to be followed. Since most producer companies deal with seasonal agricultural commodities, the size of the total funds with the company restricts the amount of business it can transact. If it borrows heavily beyond prudent financial norms but with the blessings of authorities, then it becomes heavily leveraged and hence financially vulnerable.

Else it remains too puny to be meaningful in relation to the volume of business potentially with the set of its members. While some dairy producer companies have grown to respectable sizes, one must remember that milk is hardly a seasonal commodity, and that they have been raising compulsory equity contributions from compulsory member deposits often linked to the volume of transactions, which the members do with the company.

The naivety of the promoters relates to the belief that mere pooling of demand or of produce will fetch the producer company lasting competitive advantage. It is true that when compared with the transactions of a solitary small producer, the terms enjoyed by the producer company that pools demand or produce of many members can be somewhat better. The chief advantage often enjoyed by producers in initial periods is savings on transactions costs. Yet what tends to happen is that with this pooling of the produce or the demand, risk associated with the transactions also gets pooled without any compensating mitigation strategy.

Secondly, unless the logistics are so hopeless that either operational difficulties or information asymmetry will perpetuate; private trade soon changes the terms of their offer and the competitive advantage of the producer company withers away. While the producers surely gain, the company loses business and hence the chances of becoming viable.

Social capital is needed to enforce the appropriate behaviors on members. The usual tendency is to treat the producer company as a buyer (or supplier) of last resort from whom all manners of concessions (commensurate with good governance or public policy principles) can be extracted. Members tend to be acutely aware of their rights, and social capital is needed to ensure that they are alive to their responsibilities as well.

These would require them to ensure that they abide by the rules pertaining to volume of business they need to transact with the producer company, quality norms, expanding their equity in the company, etc. It is easy to see that if adequate social capital in terms of mutuality and a sense of solidarity is not built among them prior to floating the company, such rules take a long time to become institutionalized.

All these four issues can be addressed if the promoter is patient and has the perseverance to mobilize and build the members into a collective with shared interests. Doing so is precisely what I mean by the term antenatal care for the producer co-operative. Sadly, such care is currently seen as being quite inadequate across a wide class of producer companies.