Young men, who joined a pyrophillite grinding factory dreaming of a better future, succumbed to silicosis, leaving families struggling for survival and justice 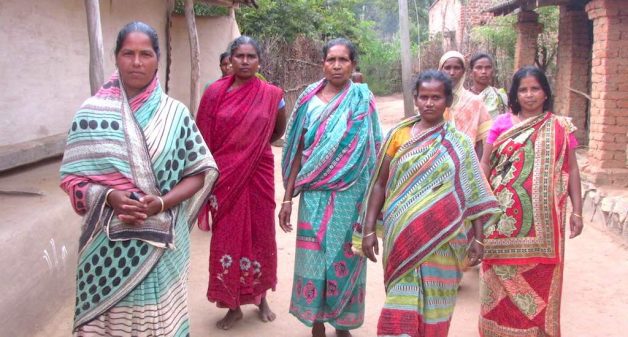 The tiny Madarangajodi village of Keonjhar district in Odisha, surrounded by hills and a few cultivable farmlands, has been in the news for the last few months. The village is known as village of widows. The men working in a nearby mining factory died in a span of two years, leaving more than 50 widows struggling to eke out a living and fight for their rights alone.

The men died of silicosis, a fatal disease that affects the lungs, while working in the pyrophillite grinding unit of the factory. Since 2007 the widows have been fighting against the Jharkhand-based mining company for compensation. In July 2017, the labor court of Keonjhar awarded a compensation of Rs 46 lakh to 16 families of the deceased employees of the now-defunct factory near Madarangajodi.

But the 16 families who heaved a sigh of relief find their hopes fading as the Jharkhand-based mining company plans to challenge the order of the Keonjhar labor court.

It was in 1982 the Jharkhand-based company got rights for mining pyrophyllite over 53.8 ha near Madarangajodi village, about 20 km from Keonjhar town, the headquarters of Keonjhar district. Men from Madarangajodi and nine surrounding villages started working in the mining company, which was engaged in production of lime and sandstone.

“Before joining the mining factory, the men were either working as agriculture laborers or migrating to other places to work in construction sites. It was very difficult to meet the basic needs of the family,” Gangadhar Dehuri, now 50 and one of the few survivors, told VillageSquare.in. “When the mining company got lease and opened its unit we all dreamed of a better life.”

The villagers thought that the jobs in the factory would eradicate poverty, they could feed and clothe their families and save some money for their future. Not only did the company pay very low wages but also regular inhalation of the dust — pyrophillite was being ground to a powder — pushed them into another difficulty.

Sixty-year-old Padmabati Barik’s husband was the first to develop breathing problem and succumb. “Even after washing and cleaning with soap many times, there was a white layer all over the body. Some persons developed skin disease,” she told VillageSquare.in, showing the white powder she had preserved. “Imagine how it would affect if it was inhaled.” Some are believed to have complained of it being expelled through excreta.

“We didn’t know this white powder would be so fatal. I witnessed my brothers and other men suffer from breathing problem at an early age and succumb to death,” said Gangadhar. “I worked in the loading department and not in the grinding unit, so I survived.”

Sarojini Khuntia lost her husband in 2006. He was only 28. But according to her, he had been suffering from silicosis since 2001. Explaining her husband’s sufferings, she said, “Initially he developed breathing problem. Due to poverty and lack of money we avoided going to the hospital. Later when it became worse, we went to a nearby health center.” The doctor referred him to Keonjhar district hospital.

At the district hospital Sarojini’s husband was diagnosed as suffering from tuberculosis and was given medicines accordingly. “But when things did not change I took him to SCB (SCB Medical College and Hospital) in Cuttack,” Sarojini told VillageSquare.in. The doctors informed that he suffered from silicosis, a fatal disease of the lungs caused by constant inhalation of crystalline silica.

During 25 years of the factory’s operation, the men continued to work, unaware of the danger of silicosis. The toll was the highest in Madarangajodi. Most of the men who died suffering from silicosis were between 18 and 30 years of age. “The situation was dangerous because every alternate month one or two persons would die. There are women who were widowed at the age of 19 and 20 left with children who were just a few months old,” said Sabitri Barik a widow, wiping tears in her veil.

Even after they were diagnosed with silicosis the men continued to work in the mining factory. When they were unable to walk properly, the wives accompanied them to the worksite. “Because the family depended on the weekly wages of the laborers even though the amount was meager. It was a support to feed the family and the treatment,” Sunafula Khuntia, a widow, told VillageSquare.in.

For her husband’s treatment, Sarojini spent nearly Rs 3 lakh, but the company did not provide any financial support during the treatment or after his death. 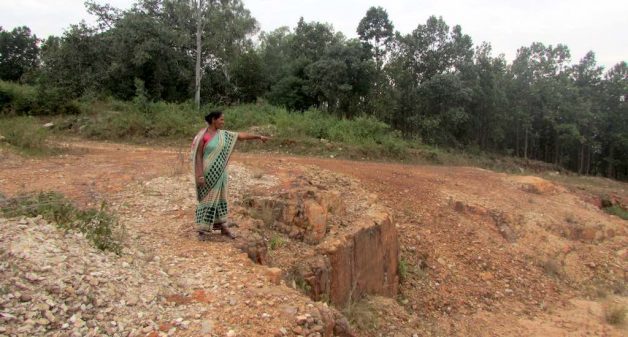 Sarojini, one of the widows, pointing at the mining area. (Photo by Rakhi Ghosh)

When the situation worsened and the men died one after the other, the women went to the company official, seeking compensation. “We asked the company owner to give us compensation as the 50-odd men in these villages lost their lives to occupational hazards while working in the mining company,” said Sarojini. “But he said the laborers might have died due to liquor or other reasons, though we had medical reports that mentioned silicosis as the cause of death.”

After many men died, the widows gathered at the worksite and asked the company for compensation. When the company owner did not heed to their demands, they fought to close the factory down. “When my husband died, our second child was then only six months old. We didn’t want our children to work in the same factory and die of silicosis,” Anjana Khuntia, one of the youngest widows, told VillageSquare.in. The factory closed down its operations in 2008.

Reacting to allegations of lack of precautions by workers, Sarojini said that the men wore masks but that was not sufficient to stop the inhalation of the deadly silica. “One can say that the factory violated the safety rules by not providing safety gear to the employees and not conducting regular health check-ups,” Niladri Mishra, a longtime environmental activist in the mining areas of Keonjhar, told VillageSquare.in.

To sustain their families and the fight for compensation, the women went through many hardships. For their fight against the company, some sold their ornaments, while others borrowed money from moneylenders by mortgaging their house or farmland.

A social activist of Keonjhar moved the National Human Rights Commission that directed the Keonjhar district administration to carry out an investigation. The officials who visited the village in 2013 found merit in the complaint. Though the villagers said 50-odd male members died of silicosis, the labor department attributed only 29 deaths to silicosis.

“Many have been left out of the list because they couldn’t provide necessary documents for proof of age, employment proof and medical report,” Kainfula Mahakud told VillageSqaure.in. “When my husband worked in the factory and died of silicosis, why should my family be denied compensation?”

It is nine years since the pyrophyllite mining company has been closed and the widows are left to fend for themselves. The company or the state government has provided no compensation, except a monthly pension of Rs 1,000. A visit to Madarangajodi and surrounding villages indicate how other issues like child labor, child trafficking, denial of education to girl children and early marriage plague the lives of the villagers living in extreme poverty.

“A case of employee compensation was registered at the assistant labor commission’s court. After the probe the court decided that only 16 beneficiaries will be provided with a compensation of Rs 46 lakh,” Laxmidhar Rout, Assistant Labor Commissioner, told VillageSquare.in. “But there is a possibility of the company owner moving a higher court.”

If that happens, justice to these women will again get delayed. But the women are willing to fight for their rights till the end. “We will not give up our struggle for compensation,” declared the women. “Because we have seen how painful their suffering was, during the last days of their lives,” said Sarojini, adding a reason to their resolve.