With various factors contributing to unchecked erosion of the banks of Padma River, villages along its course in Jalangi have lost farmlands, forcing women and men to migrate to distant places in search of a livelihood 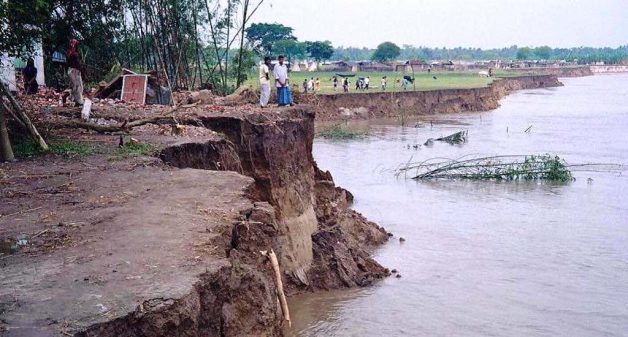 “Our land in Karimpur village of Nadia district was swallowed by a raging Padma River. I work as a welder in Pune since I was 15 years old,” said 19-year-old Laltu Paramanik, while on a visit to a relative’s house in Dayarampur. “My family was languishing in penury but after I started working in Pune, my family is able to have at least one square meal a day.”

Dayarampur, a village in Murshidabad district, and situated on the western bank of River Padma near the India-Bangladesh border, has lost thousands of hectares of agricultural land and homesteads to river bank erosion. Paramanik is one of thousands who have had to migrate from their native villages, having lost their lands to river erosion and left with no alternate livelihood. They migrate to southern states or even to the Middle East to beat the poverty that befalls them. Besides, boatloads of men migrate across the river every day to work as agricultural laborers.

The then Chief Minister Buddhadeb Bhattacharya of West Bengal had declared Dayarampur in the Jalangi administrative block a model village, where Hindus and Muslims live amicably. Hindus and Muslims make up an equal percentage of the total population of 8,000. Majority of Hindu population are Dalits and other backward classes (OBC). A few hundreds of the Santhals displaced by the flooding of Padma in Bangladesh have also settled in the village.

Agriculture was the villagers’ sole livelihood. But erosion of the river’s banks has turned the lands uncultivable. In the last two decades, flooding of Padma has led to rampant river erosion, taking agricultural lands in its wake. Loss of land meant loss of livelihood, leading to numerous deaths due to hunger.

Flooding and erosion deposited river sand in the agricultural lands. “Cultivating over sandy soil, or on a mixture of sand and mud is extremely difficult,” Asim Paramanik, a Berhampore-based journalist who has been extensively covering the issues at Jalangi, told VillageSquare.in. “This has led to men and women of Jalangi block leave their roots and migrate to cities, ending up in urban slums across the country, from Delhi to Kerala.”

“Farakka Barrage has compounded erosion problems in Murshidabad, Malda and Nadia districts,” Abdur Razzak Mandal, the MLA (Member of Legislative Assembly) of Jalangi, told VillageSquare.in. According to him, the central government’s recent ban on wheat cultivation to avoid the spread of a fungal wheat blast disease has added to the villagers’ woes. “The only option left for them is to migrate for earning a living. Men and adolescent boys migrate to Kerala, Maharashtra, Gujarat, Rajasthan and Delhi.”

According to Gopen Sharma of Dayarampur, who has lost hundreds of acres, 90% of able-bodied men and youth migrate to cities. “They work as construction laborers, masons, painters and drivers. When there is no certainty of employment, they eke out a living by pulling rickshaws and working as load men,” Sharma told VillageSquare.in. “Some go to Saudi Arabia and work as masons, welders and electricians.”

“In the aftermath of the killing of a worker in Rajasthan, many of the villagers are returning back to their villages. Now there is a rush to go to Saudi Arabia,” said Mandal, who endorses the workers’ documents for their applications to go abroad.

Those who cannot migrate to other places, commute locally every day. They cross the river on boat and then cover 10 km to 15 km on foot to work as agricultural laborers. Some, like Wazir Ali, do so to work on their fields, as the fields have shifted from their original location, due to the erosion.

Asim Paramanik cites wage difference as another major reason for migration. While toiling hard in their or others’ agricultural lands does not bring in much of an income, migrating to work in other sectors does. According to a study by Irudaya Rajan S., an expert on migration and a professor of economics at the Centre for Development Studies in Thiruvananthapuram a large number of migrant workers in Kerala are from Bengal. “In Howrah railway station, you can observe thousands from rural Bengal boarding the unreserved coaches of trains leaving for Kerala,” Paramanik told VillageSquare.in.

According to the study, a semi-skilled worker can earn around Rs 400 a day in Kerala. “Earlier, a majority of the migrant workforce was from Tamil Nadu, but the trend has changed,” says Paramanik, quoting the study. “Even if they get 20 days’ work, they can earn up to Rs 8,000 and send money back home.” The migrants save on expenses by living together. The migrant workers from Bengal work in jewelry, plywood and construction industries of Kerala.

The villagers face different kinds of problems depending on the places they migrate to. The villagers, who commute every day by crossing the river, have to show an identity proof to the Border Security Force (BSF) personnel stationed at the Observation Post (OP), close to the riverbank. With the workers facing a language barrier, as they do not speak Hindi, BSF personnel do not understand them and resort to verbal and physical intimidation. Villagers allege that the BSF personnel have even killed some residents.

Accidents and mishaps force many migrant workers to return to their village. A year ago, Wazir Ali came back from Ernakulam in Kerala where he used to work as a contract laborer. He suffered grievous injury while trying to escape from the police for loading sand illegally, as bid by his employer. “ After coming back from Ernakulam I have no option but to cross River Padma and walk 15 km to cultivate my land, Ali told VillageSquare.in. When Mintu Lal Biswas died in a building collapse in Saudi Arabia, the villagers led by Gopen Sharma and 97-year-old Faizuddin Biswas had a tough time to bring his body back and to arrange for compensation.

Notwithstanding the inherent dangers of migrating to distant cities and countries, villages continue to do so, since feeding the family by working in distant lands is seen as a better option than facing poverty and hunger.