Ravaged by Cyclone Phailin, people of a fishing village buried their differences and emerged with a strong sense of unity to rebuild their lives at a relocation site 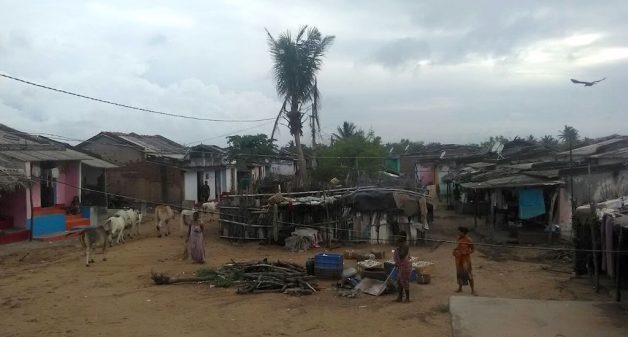 The fishing hamlet of Golabandha was severely damaged after Cyclone Phailin. (Photo by M. Basudev Rao)

Kariamma was devastated. Her house was one of the worst affected after Cyclone Phailin struck the eastern coast of India in October 2013. Her fishing village of Golabandha bore the brunt of the cyclone. The houses built of mud and having thatched roofs were no match for the fury of the cyclone.

Golabandha in Rangeilunda block of Ganjam district in Odisha was an idyllic village, with rows of small houses close to the beach and the waves lapping against the boats on the water’s edge. Fishing is the livelihood of about 95% of the 1,008 families in Golabandha. Majority of the population belongs to other backward class (OBC) and scheduled caste (SC). While living on the coast was ideal for the villagers’ livelihood, it also made them vulnerable to nature’s elements.

Odisha has come to be known as the disaster gateway of India as it is one of the most vulnerable states in the country with a very high probability of cyclonic hits. The state has been experiencing disasters on a regular basis. In the last 105 years, Odisha has suffered concurrent floods for 50 years, droughts for 32 years; it has been struck by cyclones 11 times. Each disaster affected people’s lives, their livelihood and income significantly, thus upsetting the socio-economic structure.

Earlier the Odisha government had to tried to relocate them since the village was in the vicinity of the Army Air Defence College. But the villagers resisted, fearing that their livelihood would be lost if they were to move away from the sea. In the aftermath of Cyclone Phailin, despite the limited loss of life, the impact on the coastal residents of Ganjam, Puri and Khordha districts was massive. In Ganjam district, about 90,000 houses were partially or fully damaged along the coastal areas.

In Golabandha, nearly 700 houses were severely damaged. The villagers lost 305 boats, more than 2,500 livestock, besides many valuable assets. The Government of Odisha, with financial support from the World Bank, allocated houses to communities affected by Phailin, under Odisha Disaster Recovery Project (ODRP), to reduce their vulnerability. To the villagers of Golabandha, the government allocated land at New Kirtipur.

The government chose New Kirtipur, following the guidelines regarding the distance of the village from the sea. Odisha State Disaster Management Authority (OSDMA) is the implementing agency for the post-disaster rehabilitation, with Gram Vikas, a grassroots non-profit, as the socio-technical support agency. The government offered Rs 3 lakh to each beneficiary for construction of a house, besides providing with other facilities like electricity, water supply, drainage, road, community center and daycare center.

Despite the promised facilities, the villagers were reluctant to move and start construction work, as New Kirtipur was a low-lying land. Leveling would involve additional expenditure. Groundwater was saline. The villagers said that they would not be able to use the saline water for construction purposes. Blind social beliefs and caste divisions further hindered the relocation. 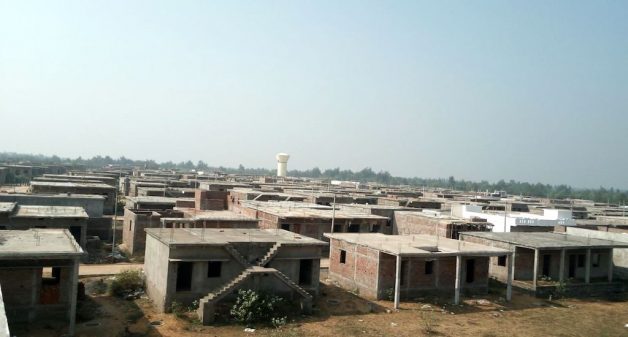 At this juncture, Gram Vikas intervened and conducted several community meetings and interacted with all the beneficiaries at a personal level. The efforts of the panchayat members and village chief also bore results. Bonding between villagers became stronger and finally they stood united in relocating to New Kirtipur. They reached a consensus on segregating groups of houses on the basis of caste. “We were having so many differences among ourselves earlier. Now we stand united,” J. Rajamma told VillageSquare.in.

For leveling the land, the villagers sought the help of the block administration and they agreed. The villagers pitched in labor wherever they could, to fill up and level the low-lying land. Rural Water Supply and Sanitation (RWSS) dug tube wells to provide potable water for the villagers. Though one tube well was dug for every 50 houses, it was not sufficient for the 1000-odd population. To solve this problem, the community dug bore wells and installed about 250 hand pumps with their own resources.

The massive construction work involved in the relocation project required skilled labor and trained masons. The supporting agencies trained interested villagers as masons. The beneficiaries have started constructing their houses through owner-driven construction of houses (ODCH) method, instead of seeking the services of contractors. “The training helped us build our own houses and so we saved money,” resident N. Ramayya told VillageSquare.in. Building the houses on their own has helped each household save about Rs 30,000.

At the New Kirtipur relocation site, 80% of the construction has been completed. “Initially we protested, but now we are happy because it’s a dream place for us,” Kariamma told VillageSquare.in. The fishermen can continue with their work, as the village is less than 1 km from the sea. The government and Gram Vikas are training other villagers in alternate livelihoods.

Some families, essentially the non-fisher folk, plan to start petty businesses and micro enterprises. The villagers also plan to develop plantation around the habitation & kitchen gardens at their backyards. “We have formed a Village Water Sanitation Committee (VWSC) for maintenance and sustainability of water and sanitation facilities,” A. Narayan, the committee’s president, told VillageSquare.in.

Another major positive change is that the community has bonded well and has resolved disputes amicably. They share resources and help each other in work. “Now we can have our new lives in safe homes,” J. Appeya Naidu, head of the village, told VillageSquare.in.

Samapti Bal is a postgraduate in sociology from Ravenshaw University and works for Gram Vikas. She has been associated with the Odisha Disaster Recovery Project since its inception in 2014.

Samapti Bal is a postgraduate in sociology from Ravenshaw University and works for Gram Vikas. She has been associated with the Odisha Disaster Recovery Project since its inception in 2014.