Nepal’s traditional bio-pesticide and fertilizer Jhol Mol is suited for many smallholder Indian farmers as well, as it can be easily made in a farm without resorting to artificial chemicals that are harmful for soil health 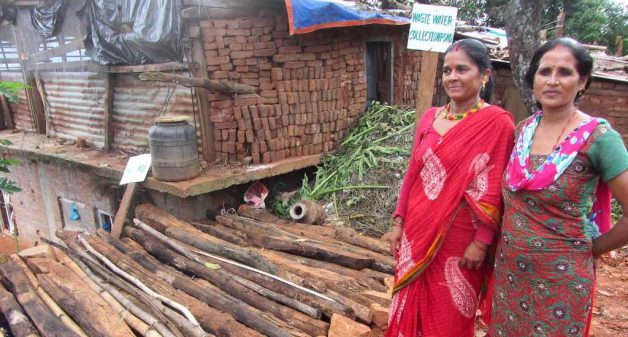 Farmers from Dhulikhel area are actively using Jhol Mol that has improved their crop productivity. (Photo by Nivedita Khandekar)

For centuries, Indian farmers have mixed livestock dung and biomass compost for use as manure. It’s the same with Nepal’s farmers. Both countries have a large proportion of small farmers, for whom chemical fertilizers and pesticides is not always desirable in the long run, both in terms of cost and maintaining soil health and nutrient balance. Nepal has turned to Jhol Mol, a traditional bio-fertilizer and bio-pesticide, which can be beneficial to Indian farmers toosexyxxxsexyxxx.ccsexyxxxsexyxxx.ccsexyxxx.

On the one hand, soil productivity decreases over the time due to persistent use of chemical fertilizers. On the other, it leads to environmental and health impacts too. To make things worse, farmers are increasingly facing the vagaries of nature vis-à-vis the changing climate, including erratic rainfall and increasing temperatures. The condition of Nepalese farmers is no different from their Indian counterparts. But many of them have found a savior in Jhol Mol.

“This already was a traditional practice. What we did was basically a blending of the scientific approach and local traditional knowledge and systems,” Keshab Dutt Joshi of the Centre for Environmental and Agriculture Policy Research, Extension and Development (CEAPRED) said in Kathmandu last month.

Jhol Mol is a variety of organic fertilizer, which is a combination of Jeevatu, Nepal’s indigenous effective microorganism mixed and fermented with water, cow or buffalo urine, cow dung and biomass such as leaves available on the farm land. Although it has a pungent odor and taste, “it is helpful in controlling insect pests that attack and damage crops, protects crops against fungal and vector-borne disease and improves plant health,” its promoters say. Farmers from the Dhulikhel area in Nepal corroborated this. The farmers used plastic tanks or even plastic lined covered pits to prepare and store this solution.

This microbe solution has done wonders for smallholders in Nepal. “After successful experiments in three pilot projects, now the idea is being replicated by farmers themselves in 16 of Nepal’s districts,” Joshi told VillageSquare.in. The Nepal government has come forward to spread this to other districts from 2017.

The International Centre for Integrated Mountain Development is helping CEAPRED, an NGO, to turn mountain villages into climate-smart villages. In fact, the success of this venture prompted Nand Kishor Agrawal, program coordinator for ICIMOD’s Himalayan Climate Change Adaptation Programme (HICAP), to include this as a positive case study in a compendium called Building Mountain Resilience: Solutions from the Hindu Kush Himalaya brought out in December at the International Conference on Resilient Hindu Kush Himalayas (HKH) held at Kathmandu. 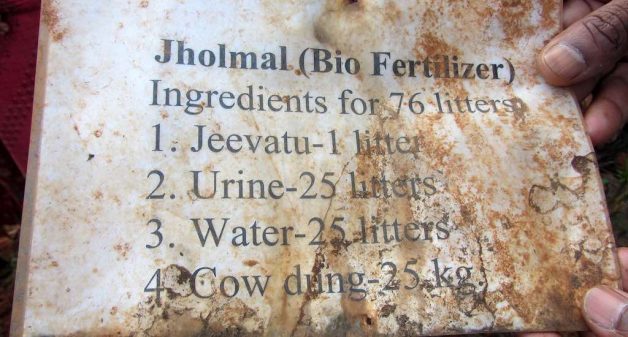 A small display board showcasing the combination that goes to form Jhol Mol. (Photo by Nivedita Khandekar)

After meeting Joshi and his colleague Roshan Subedi at the open stalls showcasing various resilience practices across the HKH — several of them featured in the compendium and such that can be applied for Indian Himalayas and its foothills too — I asked Agrawal, originally a rural development management professional, if this can help Indian farmers. The immediate response was: “More than Nepal farmers.”

“This — the Jhol Mol solution — is in fact more feasible for Indian conditions. The important thing is that this needs fermentation. It will work for both Indian Himalayan villages and for plains too. With more temperature in Indian villages on plains compared with Nepal hills, this will function even better,” Agrawal told VillageSquare.in.

And just as this is more effective for small farmers in Nepal, this beneficial microbe solution can be effective for Indian small farmers. Government data shows that India has about 67% farmers categorized as marginal (those with less than 1 hectare of land); about 18% as smallholding farmers (1-2 ha) and just about 10% that fall in semi-medium (2-4ha) land holding.

In Maharashtra, the state government filed an FIR against five companies when at least 18 people died between July and October 2017 in Yavatmal district, allegedly owing to a toxic pesticide they were exposed to.

Statistics from Government of India’s Department of Fertilizers shows that there are 160 fertilizer companies across India, including public sector, cooperative and private, and the total sale of fertilizers in 2016-17 was 54.2 million tons. The government said in a reply to a question in Lok Sabha on January 2 this year that the all-India consumption of urea for the year 2014-15, 2015-16 and 2016-17 was around 30 million tons every year. Further, stating that the import of urea is based on demand-supply gap dynamics, the government said it has allocated Rs 14,000 crore for Imported Urea in the Budgetary Estimates (BE) 2017-18.

The Crop and Weather Watch Group under the Ministry of Agriculture and Farmer Welfare’s Crop Forecast Coordination Centre holds regular meetings — such as this latest meeting on January 5, 2018 — where the Central Integrated Pest Management Centres (CIPMCs) report about pests and diseases.

But, as is evident from Maharashtra’s example, chemical fertilizers have not helped, and especially so for the smallholding farmers. It should indeed be evaluated if the usage of chemical fertilizers, including urea, is really worth in view of both the cost and risk involved. Remember, the government’s fertilizer subsidy stood for 2017-18 stands at Rs 70,000 crore, according to the annual budget. Chemical fertilizer cannot be a long-term solution even for the soil health. More and more farmers should be doing better without the chemical fertilizers and turn to entirely organic farming.

The ICIMOD conference adopted a 12-point action agenda for building resilience across the Hindu Kush Himalayas. Aligned with the sustainable Development Goals (SDGs), it talks of prioritizing what is essential for mountains in view of the changing climate, which includes “mass promotion of resilience-building technologies and solutions that are proven to be simple, affordable, and replicable apart from promoting and strengthening regional cooperation at all levels across the HKH region.” And in cases such as Jhol Mol, this “replication” of a simple, affordable solution can be done across India, not just Himalayas.

Organic farming has taken a positive turn in India with more and more demand from the conscious citizens. Ardent promoters of organic farming have always maintained that it can meet demands for the growing food needs of Indians and also be environmentally friendly. Jhol Mol proves it can be not just cost-effective but good for farmers’ health and that of the soil as well.

Nivedita Khandekar is an independent journalist based in Delhi.

Nivedita Khandekar is an independent journalist based in Delhi.