With recurrent droughts, landowning marginal farmers of Solapur in Maharashtra were forced to work as wage laborers till they switched from cash crops to horticulture and millets for an economic turnaround 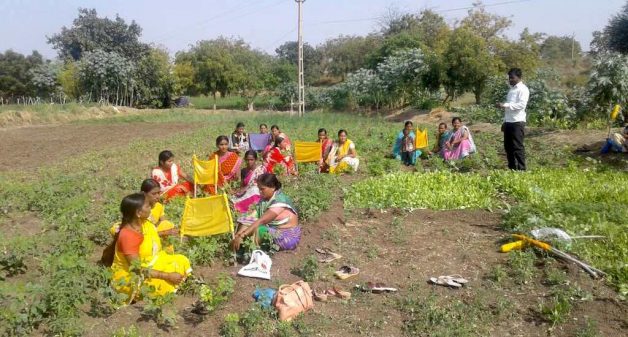 Women farmers in Solapur are field-trained in growing a wide variety of crops. (Photo by Swayam Shikshan Prayog)

When monsoons failed, marginal farmers 31-year-old Suchita Vasudev Khapale and her husband worked as farm laborers, earning a daily wage of Rs 120 and Rs 170, respectively. They grew sugarcane, wheat and sorghum in their five-acre land in Waluj village of Mohol administrative block in Solapur district.

Solapur district of Maharashtra is prone to droughts. The farmers of Solapur are mostly marginal landholders, owning less than five acres. When it rained, they cultivated sugarcane, wheat and sorghum once a year. During summer and also when it did not rain, they worked as laborers at other places.

Even if it rained there was a lot of uncertainty because of pest attacks and unstable prices. Naturally they were unsure of their farm income. Most of them are Dalits that rank low in the caste hierarchy. Thus, famers including Khapale led insecure lives on many fronts.

The model is based primarily on crop diversification. Adapting the model, farmers grow a number of traditional crops like vegetables, pulses, millets, cereals and fruits, three times a year. This practice ensured production throughout the year. 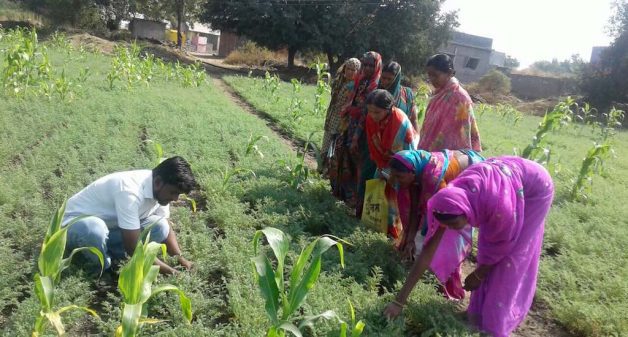 Khapale convinced her husband to try diversification of crops, as anyway they were suffering losses. They decided to grow diverse crops in 2.5 acres and to cultivate sugarcane and wheat as usual in remaining 2.5 acres. They grew 20 varieties including okra, coriander, spinach, onion, fenugreek, tomato and many native vegetables.

Farmers have turned to drip irrigation, after learning about government schemes and loans for the same, so that they can use available water through twelve months.

Khapale grows sorghum and wheat for her family’s consumption. She follows inter-cropping, growing vegetables between the wheat and sorghum plants.

The women farmers cultivate fruit crops as well. Khapale cultivates guava and papaya. Kade grows pomegranate. Though her neighbors teased her for choosing to cultivate pomegranate, hitherto not grown in this region, she grows them, with her son guiding her with relevant information from the Internet.

Three months after she planted vegetables, Khapale started harvesting between 100 kg and 150 kg of okra on alternate days. Thus she earns Rs 3,000 to Rs 4,500 every other day even if the rates are as low as Rs 30 per kilo.

Khapale harvests four or five types of vegetables every day, throughout the year. “Even if I have to sell two vegetables at a low price, I get higher rates for the remaining two,” she told VillageSquare.in on the benefits of multi-cropping. Now she does not work as a laborer in other’s farms, but engages workers to help in hers. Her husband has decided to go for the twenty-crop method in all the five acres, as their financial status has improved.

The villagers send their produce to the market in Pune. “Despite having only two acres of land, my family of two sons along with their wives and kids can survive with the income from that,” Kade told VillageSquare.in.

More than 50 women farmers of Waluj village have adopted this model, selling vegetables for about Rs 1,000 every day, and have turned their lives around. Besides, families are able to consume nutritious food including vegetables.

According to Samir Sheikh, coordinator at SSP, they have implemented this farming model in over 500 villages of five drought-affected districts, namely, Osmanabad, Beed, Washim and Hingoli of Marathwada, besides Solapur. “At least 25 farmers from each of these villages have shifted to this farming model from their traditional cultivation of cash crops,” Sheikh told VillageSquare.in.

Though farmers of Osmanabad belong to upper castes, they fall under the economically weak category, with the situation changing now. “After crop diversification, I cultivate 10 crops including toor (pigeon pea), gram and green peas,” 42-year-old Shobha Janardan Vir, of Masala Khurd village in Tulajapur told VillageSquare.in. She has been able to make a good income, despite the region facing drought for three consecutive years.

According to Samir Shaikh, farmers from many villages have become aware of the benefits of crop diversification and multi-cropping and are keen to implement the model. They plan to reach farmers in 400 more villages in the next two years.

Speaking to VillageSquare.in about the economic benefits she enjoys, 42-year-old Kamal Waghmare said, “Due to diversification, land has become more fertile again. This model has also been effective against pest attacks and hence crop losses.”

Varsha Torgalkar is a Pune-based journalist.