Residents of Rawatpura village in Udaipur have been left behind in the digital technology revolution of the country, but they hope that their children are able to catch up with the fast-paced development 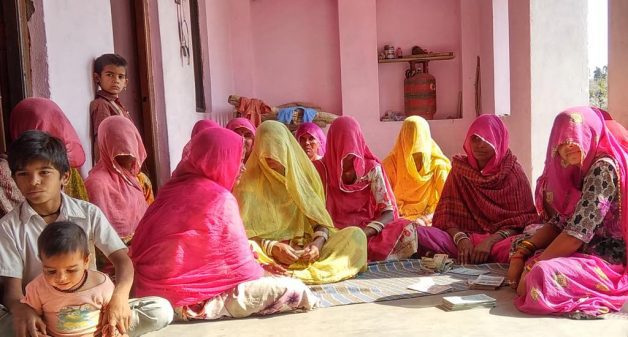 Left behind in the digital revolution, women of Rawatpura village hope their children would catch up with the fast-paced development. (Photo by Shubham Sharma)

For 28-year-old Laxmi Kunwar, a thin woman with a child in her arms, the village is her world. Her life revolves around her family — taking care of her child, cooking food in a chulha or makeshift stove, feeding the couple of buffaloes that her family owns, and doing other daily chores.

Kunwar quit her studies owing to family pressure and perpetual poverty. After marriage, she has been confined to the village, except a few excursions to Udaipur every other year to meet her relatives. She appeared disconnected.

For many women like Kunwar, as well as men, such is life in Rawatpura, a small village of 150 families. The present government as well as the previous ones had mentioned digital inclusion in their manifestos.

However, for millions of villagers like those in Rawatpura, it remains an unutterable phrase. Villagers are aware of the change that digital inclusion can bring to their lives, but lack the wherewithal. They hope that their kids do not get left behind in the technology-driven progress.

Rawatpura is in Girwa administrative block of Udaipur district. It is about 60km from Udaipur, but ages away from where the world has progressed. Most of the residents of this village are unaware of the phenomenon of digital inclusion and the benefits of staying connected to the outside world.

Only a few of them have held an Internet-enabled phone in their hands, getting a tiny glimpse of the power democratized and bestowed in the hands of an individual. No one has ever used a desktop computer or a laptop.

The government high school, functioning in a dilapidated building and barely able to defend itself from the weather and blue bulls, is not helpful in making people understand the benefits that technology could place in their hands. The school too does not have computers, as computer education is not part of the curriculum.

The teachers are unaware of the full extent of benefits and power of technology. The headmaster has a smartphone and uses it to access only some of the social media applications. The school being away the village, it is a task for him to get the students to even attend school.

When a telecom company introduced Voice over Long Term Evolution (VoLTE) mobile phone service throughout the country, it affected the village adversely. This move pushed the only non-VoLTE telecom company that had a tower near Rawatpura to remove it, as it did not bring good returns.

Yet to comprehend the impact of losing the tower, the villagers, when informed, quickly grasped how Internet and technology could transform life of individuals and communities. 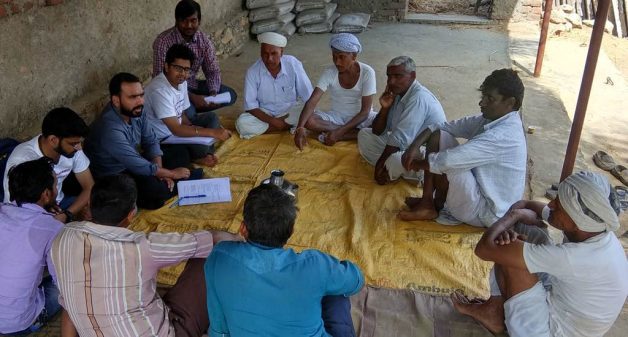 Aware of the benefits of digital inclusion, Rawatpura villagers believe they will progress faster with access to Internet and information. (Photo by Shubham Sharma)

In a focus group discussion that we held with eight senior members of the village, they agreed that computer and technology could give them more control over their life. They understand the unlimited possibilities of technology; they just seem unable to reach it.

We encouraged them to tell us how a computer could help them in their quest for a better life. The most enterprising of them explained how a computer with an Internet connection would help them learn about the various agricultural practices and techniques to improve cultivation and increase yield. They also expressed their keen interest in understanding more about Internet and its applications in their daily lives.

One of the reasons for villagers lagging behind on digital inclusion is their extremely low disposable income. Agriculture is the livelihood of most of Rawatpura’s residents. A few are daily wage laborers.

Members of the prominent households that we visited earned an annual income of Rs 30,000, that too in a good year. The peasants who cultivate crops on leased lands earn much less. The Mahatma Gandhi National Rural Employment Guarantee Act (MGNREGA) scheme, which is supposed to provide jobs for 100 days in a year to all poor rural households, does not do so in this village.

When the villagers earn such pathetically low income, there is little chance that they would invest their hard-earned money in adopting technology or mobile phones.

A watershed project executed with the help of Prayatna Samiti, an NGO working in the village, is a ray of hope for the villagers; it would lead to increased crop production and hence increased household incomes. Then the villagers might not hesitate to invest money towards digital inclusion.

The only way to take the villagers out of poverty and push them towards progress is by getting them connected with the technology revolution. It is imperative that they get connected to the outside world. The first step towards digital inclusion is to get a telecom operator to set up a tower that enables good quality calls and high-speed Internet. There can be no education without tools.

There are many ways in which digital technology can be introduced to villagers in a constructive, non-invasive and non-frightening manner. While the world is moving towards a cash-free economy, villagers are still apprehensive about online financial transactions.

The government should run campaigns to educate the villagers. Once they learn that digital technology is safe, they can explore other avenues to access information.

An alternate solution would be the rural version of experience stores that government and NGOs can set up as hubs to help villagers experience and adopt technology. The community digital hubs could have mobile phones and desktops either crowd funded or provided by the government. The villagers could use them for free or by paying a nominal charge.

We had a discussion with an all-women self-help group. The women, all in their thirties and having borne at least one child, understand very well that their children need to be ahead with technology.

After joining the group, Rupa, one of the young women, has started saving whatever meager amount she can. When asked what she would do with her savings, she said that she would use it for her child who was playing nearby. She wants to make sure that her child does not get left behind in the fast-paced development.

When technology is within their reach, the villagers would fully realize the benefits of having information at their fingertips. Be it information on vaccination that Rupa and Laxmi Kunwar could use for their children, or on better management of the buffaloes that they own, or on the market price of the produce from their fields, digital inclusion would benefit the villagers immensely.

It rests upon us and the government to make sure that the village and its residents are included in our country’s digital revolution.

Shubham Sharma is a student at Indian Institute of Management, Udaipur. Views are personal.

Shubham Sharma is a student at Indian Institute of Management, Udaipur. Views are personal.