A significant fall in fish stock due to environmental and human made reasons, combined with stringent laws aimed at restoration of the Chilika Lake, has forced local fishermen to migrate seasonally in search of work 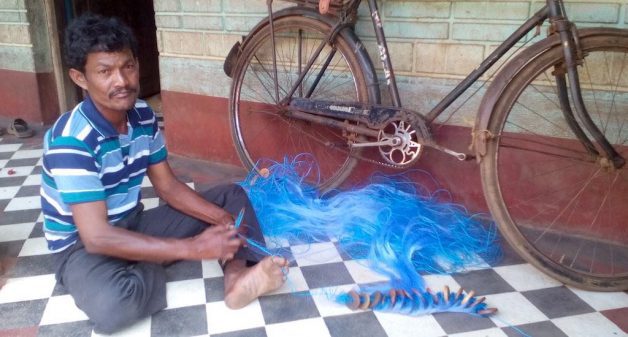 Mangalajodi fishermen find it difficult to sustain their families with the meager income they get from fishing in Chilika. (Photo by Rakhi Ghosh)

It was forenoon. In Mangalajodi village, the familiar sight of women sitting in their verandahs and mending fishing nets was missing. The change in the landscape was apparent since many of the villagers have quit fishing, their traditional occupation.

Mangalajodi, with a 5,000-odd population, is on the banks of Chilika, the brackish water lagoon on the east coast of Odisha. Residents of Mangalajodi in Tangi block of Khordha district have fished in Chilika for generations for their livelihood.

Septuagenarian Siddheswara Behera began fishing in Chilika as a teen. “We used to bring a huge catch of crabs, prawns and a variety of fishes,” he told VillageSquare.in.“It was our source of income and a way of life.”

The fishers’ way of life changed with decline in yield, leading to migration of youth and families. Kabi Behera is unsure whether to continue fishing or migrate for labor work. “It’s very difficult to run a family of four or five members with a meager daily income of Rs 100 to Rs 150,” Kabi told VillageSquare.in.Villagers who continue to fish hope that the recent government initiatives would secure them a better future.

Chilika lagoon comes under three districts — Puri, Khordha and Ganjam. It supports the livelihoods of more than two lakh fisherfolk belonging to 15,000 families.

“During the 80s and 90s, Chilika faced continuous environmental and anthropogenic pressures, leading to an adverse impact on biodiversity, besides loss of fishery resources,” Krupasindhu Bhatt, a consultant for Chilika Development Authority(CDA) told VillageSquare.in.

Environmental pressures included siltation, choking of inlet, shrinkage in water spread area, weed infestation and depletion of fish resources. Besides, shift in the lagoon mouth led to an increase in fresh water species and decline in brackish water species, according to villagers.

Anthropogenic problems included excessive fishing, destructive fishing practices, use of modern fishing gears, gheris or prawn-rearing enclosures, operation of a large number of mechanized boats and obstruction of migratory routes of economic species. “Gheris made movement of boats difficult,” Ramakanta Behera told VillageSquare.in.“Earlier we used to fish within a 5km radius, now we have to travel more than 50km.”

However, illegal encroachment of the lagoon for prawn farming, and fishing of juveniles continued unabated. As this had an adverse impact on fishery resources, CDA launched an eviction drive.

According to Bhatt, the prawn enclosures and catching juvenile fish adversely affected the lagoon’s biodiversity. Juveniles grow near the banks, as food supply is good in shallow waters. “The fisherfolk were catching juveniles as both fresh and dried juveniles have a good market price.” 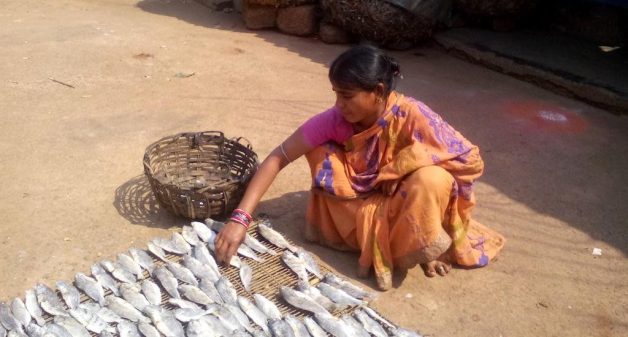 Juvenile fish have a good demand as fresh and dried fish. (Photo by Rakhi Ghosh)

Small and marginal fishermen used zero nets with a mesh size of less than 10mm, to catch juveniles near the banks. As they ended up catching brood fish also, CDA banned the use of zero nets. “They set our zero nets on fire,” Shashidhara Behera told VillageSquare.in.

Fishermen complained that their part of Chilika did not have large fishes, and traders from outside caught whatever was available. They felt that the officials did not understand their predicament. “We caught juvenile fish only because we didn’t have an alternative,” said Shashidhara. “With no other livelihood, many are leaving our soil.”

Mangalajodi’s fishermen started migrating in 2010, since they could not sustain their families with the income from Chilika. “Initially they migrated to Bhubaneswar to work in construction sites,” panchayat member Hari Behera told VillageSquare.in.

With better earning potential in other states, they migrated to Gujarat, Tamil Nadu, Andhra Pradesh, Telangana and Kerala. “But most of them face harassment as they have no knowledge about labor rights,” said Hari.

Dhani Behera and his wife migrated to Chennai, leaving the children with their parents, as the agent promised Rs 10,000 each. Dhani used to earn Rs 4,000 a month from fishing. “The alien place and unfamiliar language forced us to tolerate the harassment when we asked the employer to pay us,” Dhani told VillageSquare.in.

“This is not an isolated incident, we have addressed many similar cases,” said Malaya Mishra of Adhikar, a non-governmental organization from Khordha that intervened and got them their wages.

Sugyan Behera, a 20-year-old matriculate, is not interested in fishing. Finding labor work a better opportunity, Sugyan and a group of young men migrated to Chennai to work as painters, flaunting expensive clothes and mobile phones two years later as proof of their income.

Fishing is a male domain; women carry out associated works such as mending nets, selling fish and drying them. The ban has affected women, especially single women who eke out a living by selling fresh or dried fish in the local market.

Hundreds of people migrate for work; every year the number of migrants increases. Single women prefer to work in construction sites in Bhubaneswar, commuting daily. They gather at labor nakas(markets) of the city, where contractors fix their wages and take them to work sites.

“Commuting daily takes a toll as we have to finish the household chores before leaving for work,” Sumati Behera, told VillageSquare.in.“I wake up in the wee hours of the morning to finish household work and go to Bhubaneswar,” said Sanjukta. Also, women get lesser wages than men. 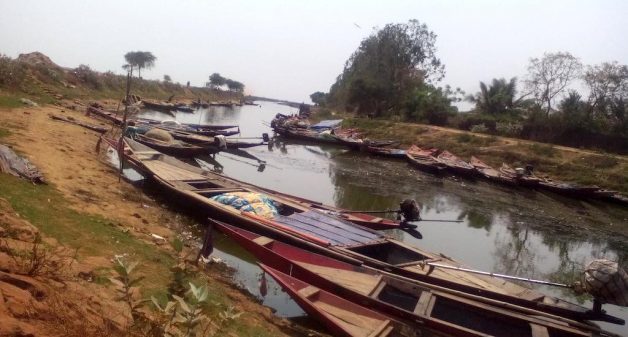 Many boats in Chilika’s banks near Mangalajodi remain idle because fishermen have migrated to work as laborers. (Photo by Rakhi Ghosh)

Unlike in selling fish when they got cash immediately, for labor work, the women get paid once a week or longer at times. “It’s difficult since we need money to feed the family,” said Sanjukta.

As both parents migrate, leaving the children with relatives, their health, education and nutrition suffer. “In recent years there have been cases of early marriage and trafficking with false promises of marriage and job,” Mishra told VillageSquare.in.

Understanding the grave situation of the fishing communities, the state government and CDA have formed Chilika Fishermen Central Cooperative Society (CFCCS), a body of fishery cooperatives.

The objective of CFCCS is to strengthen the primary fishermen cooperative societies by providing financial assistance, and by introducing effective marketing system and modern stalls for sale of fish.

The intervention would also make fish, prawn and crabs from Chilika available to consumers in cities and towns. CFCCS plans to provide post-harvest management facilities to Chilika fishers, and enable women self-help groups to make value added products from fish.

“Infrastructure such as jettis, roads, solar street lights, and landing center that the government is providing would hopefully help the fishermen resume their traditional occupation,” said Bhatt.