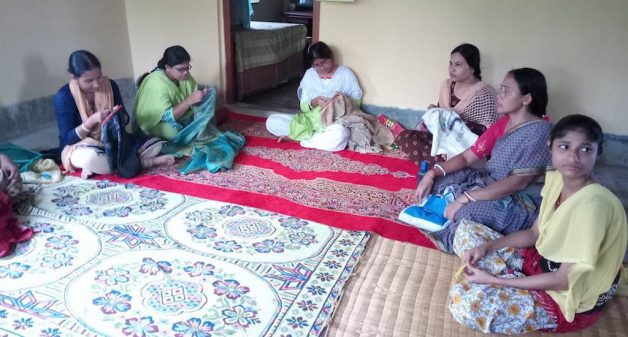 Driven by a fierce determination to support her family financially, Pritikana Goswami took up Kantha embroidery work outsourced by a boutique. Encouraged by the recognition of her skills, the young woman started a center to train rural women in South 24 Parganas district.

However, her center started tasting financial success many years later, when her daughter used the traditional art to appeal to modern sensibilities and sold the products from an urban studio.

In 1973, after completing her matriculation examination, Pritikana Goswami was looking for meaningful work to support her family and supplement their meager income. Her father had suddenly passed away a number of years ago, leaving them penniless and at the mercy of relatives.

Serendipity brought her to a friend who was embroidering a saree. Goswami watched her carefully. When her friend left her alone for a short while to attend to some domestic work, Goswami succumbed to her intense desire and quickly embroidered a small portion of the saree.

To her surprise, the friend not only complimented that Goswami was more skilled than her, but also encouraged her to take it up as a vocation, and embroider sarees on a piece-rate basis. She told a clueless Goswami about Pitambari, a shop in south Kolkata that outsourced embroidery work. 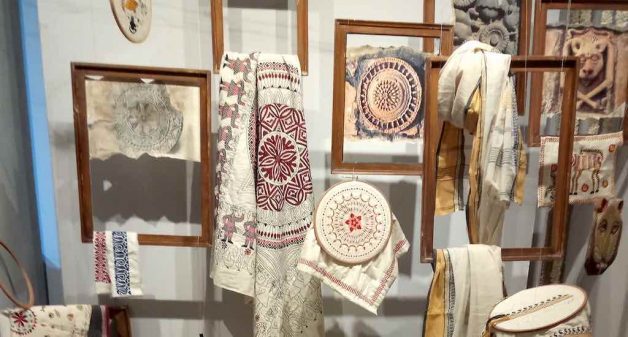 Embroidery done on modern mediums displayed as an art installation at an exhibition of Kantha work in Kolkata. (Photo by Dhruba Das Gupta)

Goswami learnt that she needed to deposit Rs 50 as caution money before taking a saree home for embroidering. She decided to borrow money so that she could start working. However, she could borrow only Rs 30, no mean sum in those days.

Seeing Goswami’s determination, the lady proprietor at Pitambari asked her to embroider a small sample piece then and there. The lady was very pleased, and Goswami went home with a set of orders that would bring the first earnings to the family consisting of her widowed mother and sisters.

She carried on the piece-rate embroidery work for nearly 15 years. When she got married to a frail husband, and had two daughters, her income sustained her family. Her career took a significant turn when she became a trainer.

In 1990, Ruby Pal Chowdhury, chairperson of Crafts Council of West Bengal, encouraged her to open an artisan training-cum-workshop in a lesser-known part of southern Kolkata, for the benefit of women from rural South 24 Parganas.

In 2000 she relocated to rural Kamrabad of Sonarpur in south of Kolkata. She worked hard with her two daughters, literally going door-to-door, requesting women to learn Kantha embroidery. Her center taught women traditional Kantha embroidery called Nakshi Kantha. Though it was very challenging, her reputation as a trainer grew.

Goswami has successfully revived and replicated many historic art pieces with ample support from Pal Chowdhury. The high point of her artisanal career came in 2001 when she won the National Award from the then President of India A.P.J. Abdul Kalam for her craftsmanship. Later, she was also recognized as a master craftsman, enabling her to train others in her craft.

She started touring the country to present her skilled craft at many fairs and exhibitions. In 2006 she became associated with a Japanese project, which is an extension of the Crafts Council of West Bengal, and is still running in Sonarpur.

Goswami’s elder daughter Mahua Lahiri graduated from National Institute of Fashion Technology (NIFT) in Kolkata in 2007, with a specialization in leather technology. She spent many years in export houses. She was not much into Kantha work for a number of years.

A comment from a foreign buyer about the craze for copying western fashion was Lahiri’s moment of enlightenment. “Whiletouring Europe as part of my job in an export firm, I found Europeans being very proud of their brands,” she told VillageSquare.in.“I realised I should justly be proud of the wealth of traditional embroidery that I learnt from my mother.” 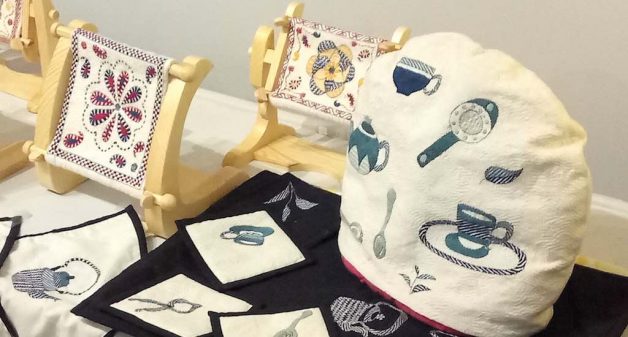 Products with Kantha embroidery on display at Hushnohana. (Photo by Dhruba Das Gupta)

A few words of that buyer achieved what Goswami’s entreaties could not. Lahiri ‘s career turned 3600. She started a new journey with Nakshi Kantha in 2016. She teamed up with two Kolkata-based partners to set up an enterprise and brand named Hushnohana. They started a studio in Kolkata through which they could take the products that the Kamrabad center produces to newer markets.

Today, the Kamrabad center has 18 skilled craftswomen. They have undergone many training programs through the years, upgrading their skills as and when necessary. They have achieved finesse in their craft that is much in demand and recognized abroad.

In the first financial year of its operations, Hushnohana garnered a turnover of Rs 1.5 lakh. Skilled craftswomen who work at the Kamrabad center as well as on a piece-rate basis with flexible timings, earn between Rs 2,500 and Rs 5,500 a month.

Minu Das, the oldest of the artisans, has been with Goswami for 17 years. “All our work bears the stamp of love and commitment for the craft,” Das told VillageSquare.in.“Our innovations come from this love; it’s not just about money.”

Dhruba Das Gupta is a writer based in Kolkata.