While targeted assistance has brought financial inclusion to farm widows in parts of Telangana, only concrete interventions can eradicate chronic indebtedness and ensure sustainable livelihoods 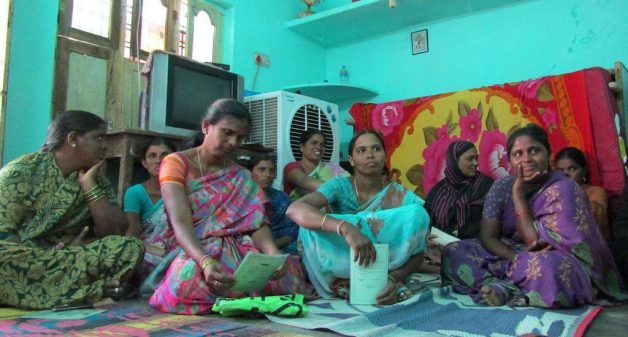 Farm widows in Atmakur of Warangal district have got their lives back on track due to financial inclusion programs. (Photo by Prajwal Suvarna)

Women start arriving in the evening at the daycare center in Machapur village. They are farm widows, whose farmer husbands had committed suicide. In the past two decades, Telangana has seen some of the highest rates of farmer suicides in India, with 632 deaths occurring as late as 2016, the third-highest for any state in the country that year.

Padma Puli is the last of the group to come. After her husband took his own life “around the time Telangana was formed”, as she put it, Padma received the compensation given to families of farmers who committed suicide. She had spent the day at the government office to complete formalities, three years after she lost her husband.

In spite of the misery, Padma decided to persist in her husband’s occupation, taking up farming in earnest, on the 10 guntas (1/4 acre) of land that she owns now. Padma is one of the lucky women. Her maternal uncle provided her with an interest-free loan to take up agriculture.

She has to repay Rs 1 lakh, but is on track in settling the loan that her late husband had taken. For hundreds of other farm widows in the region, however, a debt-ridden life remains a reality that is hard to get away from. While financial inclusion programs provide a reprieve, there is a need for long-term solutions.

Many smallholder farmers in the region borrow from moneylenders at interest rates ranging from 2% to 5% per month. During droughts, they are unable to benefit from the occasional loan waivers that the government announces since they have taken credit from informal sources. 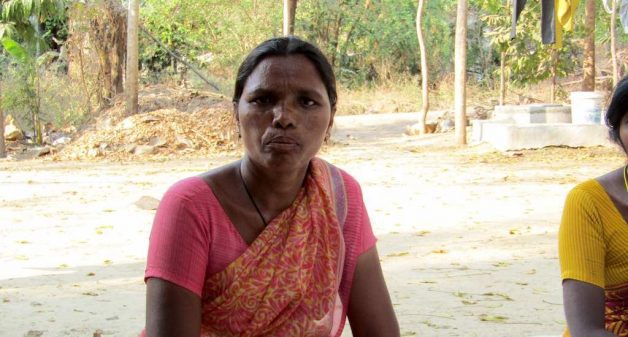 Swapna Maredungonda, who nearly lost the three acres of land that her husband had mortgaged, cultivates cotton and turmeric after getting it back. (Photo by Prajwal Suvarna)

In case of a farm suicide, the widow inherits a chronic state of indebtedness. Though banks are considered better than other informal sources of finance, farm widows do face problems.

“For even an outstanding amount as low as Rs 5,000, banks hold the passbook,” P. Damoder, the founder of Sarvodaya Youth Organization (SYO), a non-governmental organization (NGO) working with farm widows in Warangal, told VillageSquare.in.

When a farmer commits suicide, some banks refuse to release the passbook until the outstanding amount is paid. For the widows, the implications of this are severe. “To change ownership of the land, the women need the passbook,” said Damoder. Many relinquish the passbook, as what 37-year-old Swapna Maredungonda of Musthayapalli village in Geesugonda administrative block nearly did.

Swapna’s husband had taken a loan of Rs 1.75 lakh from a bank against three acres of land. After successive years of failed crops, the amount had ballooned to Rs 5 lakh. When her husband committed suicide, the banks refused to give her the passbook till she cleared the dues.

SYO helped Swapna present her case to the bank manager, who allowed her to pay back just the principal before giving her passbook back. Today, Swapna has got her three acres back, where she cultivates cotton, turmeric and maize. She has almost repaid the debt her husband had taken.

For starters, it is hard to verify the amount of loan outstanding with moneylenders. “Our first task is to mediate with moneylenders and get them to release the patta(title deed) of the land,” Hepsiba, a program manager with SYO, told VillageSquare.in.

After the farm widows get the title deed, there is the long, hard task of repaying the loan. In the absence of alternative sources of credit, sometimes the women have no option but to approach the moneylenders again. “At least for the crops, we need to approach them,” 29-year-old Sunitha, who cultivates cotton on three acres of land in Vasanthapura village, told VillageSquare.in.

Even with loans provided to farm widows through self-help groups (SHGs), something that SYO does in partnership with organizations like Rang De, it is hard to ensure that the women use the money for the purpose it is advanced.

Under the latest Reserve Bank of India (RBI) guidelines for Priority Sector Lending (PSL), there is a provision for banks to advance credit for ‘distressed farmers indebted to non-institutional lenders’ who are included under the weaker sections category. In practice, banks lend money to few farmers in debt or to farm widows.

“Most of the bankers do not entertain such applications for the reason that the amount is for clearing an old debt and not for productive usae,” said Amirapur Sitaramaiah, retired chief manager of the agriculture banking division of State Bank of Hyderabad. He now serves as the head of Access Livelihood Development Finance, an organization that provides finance to farmer producer companies in India.

“Banks should not insist on repayment,” Sitaramaiah told VillageSquare.in.“Agriculture loan should be converted to a term loan, payable over a period of time, not immediately, to give farmers some relief.”

Financial inclusion is only half the story. The real challenge lies in providing farm widows with a sustainable livelihood that will allow them to lead their life with dignity, with minimal external intervention. This is easier said than done in a society that has seen it fit to exclude these women from communal life and has denied them basic economic opportunities. 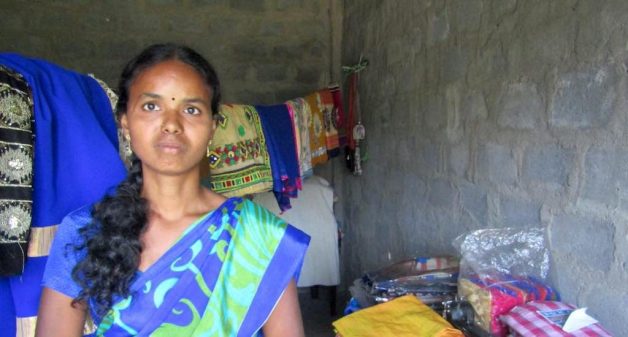 Chityala Lavanya, a farm widow, runs a small sari business from her home in Vasanthapur village. (Photo by Prajwal Suvarna)

The ostracization of widows is ingrained to the extent that it seems to permeate various levels of local administration. In 1997, after Poojara Ramadevi’s husband took his own life following a season of drought, she decided to forego the compensation, fearing discrimination at the government departments. Subsequently, she was forced to sell her land in Gurjala village, to clear her late husband’s debt.

When 36-year-old Perumandla Indira, who stays in Vasanthapur village, lost her husband, her brother-in-law took over her property. Without support from her family, Indira has taken up dairy farming and works as a farm laborer to support herself. She is still paying interest on the 14-year-old loan of Rs 1.5 lakh that her husband had taken.

The tale of harassment by family members is one that several women in the region recounted, making it hard not to see the plight of the farm widows as a form of institutionalized discrimination.

With the Rabi or winter season coming to an end, the rust brown of the cotton stalks overwhelm the smattering of white from the emaciated cotton buds, indicating another poor harvest. Some people are apprehensive about another potential uptick in farm suicides.

One thing is certain though: after media reports of the silent tribe of farm widows fade away, the misery of the families left behind endures.

In the absence of appropriate livelihood opportunities, the stand-alone financial inclusion programs prove ineffectual in the long run. On the other hand, without concrete steps taken to tackle the indebtedness of farm widows in the region, there can be little hope for progress.

Prajwal Suvarna works for Rang De, a Bengaluru-based non-profit that provides microcredit to borrowers across India. Views are personal.

Prajwal Suvarna works for Rang De, a Bengaluru-based non-profit that provides microcredit to borrowers across India.