Poor villagers in Odisha’s migration-prone districts, who toil at brick kilns in the southern states for most part of the year, have found some succor in seasonal hostels that educate and nourish their children in a safe haven 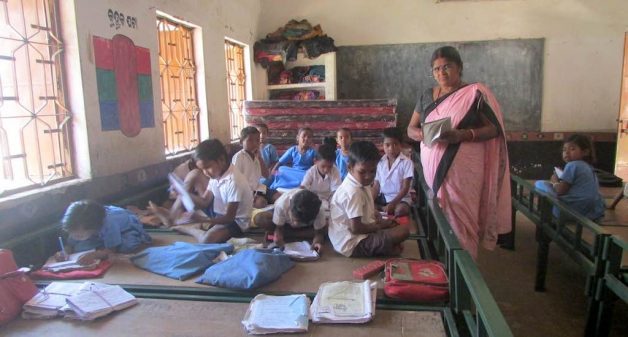 A seasonal hostel in Balangir, where classrooms double up as sleeping quarters. (Photo by Rakhi Ghosh)

Lachhaman Dundi and his parents never thought that Dundi would ever enroll in college. Hailing from Kotamal village of Khariar administrative block in Nuapada district, he used to accompany his parents as a child laborer to brick kilns in Andhra Pradesh.

While his parents did the arduous work, he flipped bricks so they would dry under the sun. “I used to flip 600-700 bricks daily in the scorching heat and sleep under the sky after a day’s hard work,” Dundi told VillageSquare.in. “We hardly got a full plate of meal.” Dundi dropped out of school since his parents migrated to other states regularly. He got back to his studies when his parents learnt about seasonal hostels.

Every year nearly 300,000 people from the area migrate to neighboring states to work in brick kilns. Children who accompany their parents work same as them, and suffer verbal and physical abuse, besides suffering from health issues, say organizations working among migrant labor.

Seasonal hostels in migration prone-districts of Odisha help build the lives of migrant children like Dundi, who are otherwise completely deprived of education.

Till a few years ago, parents took their children along, as there was no one to take care of them in the village or because of the pathuria system. Under the pathuria system, labor agents would advance money for so-called units consisting of a couple and one or two children. The children would flip semi-dried bricks or make balls of mud to be molded.

In brick kilns, as one laborer has to prepare 1,000 bricks per day, he arranges bricks in rows with very little gaps in between. Children can walk between rows easily and flip bricks. Some of the children are dropouts and some have never been to school.

Understanding the vulnerability of migrant children and to retain them in schools, the then district collector Santosh Kumar Sarangi and a few activists took the initiative to open Community Managed Residential Care Centers (CMRCC) in Balangir. The centers later turned into seasonal hostels.

The CMRCCs were opened at migration-prone villages, to prevent child migration and child labor, and to retain the children of migrant parents in the fold of education. The small experiment of civil society organizations and district administration in Balangir during 2001-02 became a successful model of retaining children from migrating, besides educating them. 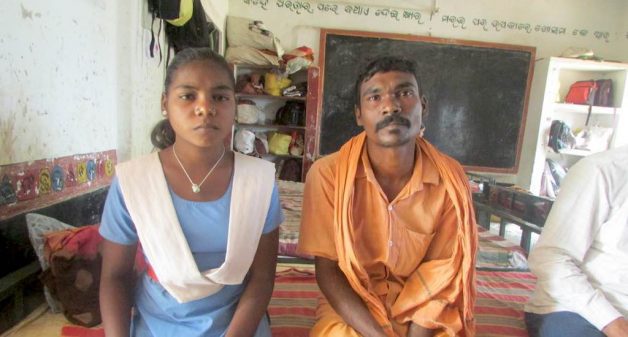 Rukmini, who joined a seasonal hostel when she was six, seen with her father, who wants her to study further. (Photo by Rakhi Ghosh)

“Earlier it was difficult to convince parents to leave their children in hostels,” Bhubaneswar Rout, program officer of Lokadrusti, a non-governmental organization (NGO), that initiated CMRCC in Nuapada district told VillageSquare.in. “After meeting parents regularly, we accommodated 193 children in seven centers in Khariar block to give them elementary education.”

However, due to fund crunch, it became difficult for the NGO to manage the center. After the implementation of Right to Education Act, the state government directed Odisha Primary Education Programme Authority (OPEPA) to take over the seasonal hostels. Lokadrusti now provides technical support.

Once exams are over and parents return, schools issue transfer certificates to the migrant children. The government directs source district school administration to re-enroll these migrant children in schools in their respective villages.

With lack of adequate rooms in government schools, classrooms double up as hostel rooms. During the day, children sit on the cots and study.

Talking to VillageSquare.in, Aswini Sahu, seasonal hostel coordinator at Lokadrusti, said, “The expenditure per child for six months is Rs 10,000, but there is no fund allocation for health emergencies.” In some schools, teachers and NGO staff spend money from their pockets if a child falls ill and needs to be treated in private hospital.

As caretakers belong to the same village and know most of the children, they agree to a salary that is less than the prescribed minimum wage. “We try to convince parents who enroll their children in September, but take them away in January, as they can earn more,” said Behera. “We can’t keep children forcibly.”

Though vulnerable, parents take girls along, as they help with household chores and also work. Harihara Baikar, headmaster, Government Project Upper Primary School of Talna, said, “Since we opened a hostel in 2005, the enrollment of girls is lower than boys.”

Notwithstanding the challenges, the seasonal hostels have a positive impact on numerous families. A visit to any seasonal hostel will give one an idea of the facilities of food, shelter, study and recreation that the children get. Electricity, water, boundary wall, toilets and minimum three rooms to accommodate children are what authorities look for when selecting a school.

“We ensure these facilities so that after school they can watch TV, play indoor games like carrom and ludo, plant trees in the garden, play, dance, eat and pray in the long verandahs,” said Behera. “The objective is to provide them space to nurture their childhood.” In seasonal hostels children can talk to their parents over phone every Sunday and visit guardians for festivals. 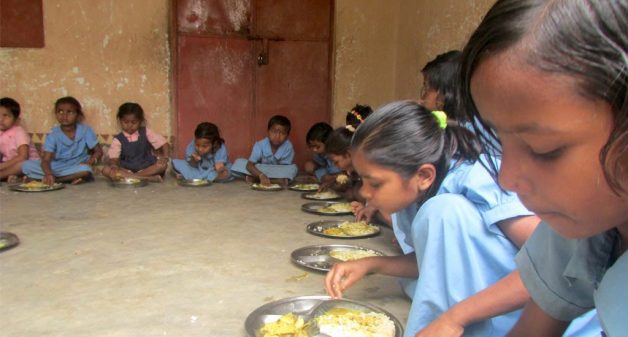 Children having midday meal at a seasonal hostel. (Photo by Rakhi Ghosh)

Speaking to VillageSquare.in, Sudarshan Panda, headmaster of Dudkibahal Project Upper Primary School, said: “While enrolling, we record the children’s health status including weight, so that we can pay special attention and give nutritious food if malnourished.” They record weight when the children leave the hostel.

They are fed locally available vegetables, fruits and snacks regularly, and non-vegetarian food once a week. “When parents come to take their children, they are surprised to see them healthier, Sanjay Kumar Mishra, activist and former Child Welfare Committee (CWC) chairperson of Balangir district, told VillageSquare.in. “They work hard at kilns and survive on broken rice and onion.”

“The objective was to educate these migrant children,” Biswanath Tarai, additional director, OPEPA, told VillageSquare.in. “Till now nearly 9,000 children have been accommodated in seasonal hostels.”

Rukmini joined the seasonal hostel of Dudkibahal Project Upper Primary School, when she was six. Her father Upendra Harijan migrates regularly, to work in the brick kilns of Pedapally, in undivided Andhra Pradesh, presently in Telangana.

“When Lokadrusti staff told us to enroll our children in seasonal hostels, we agreed because we understand the vulnerabilities our children face in work sites,” he told VillageSquare.in. Proud that his children read and write and keep good health, he wants them to study further.

Tulasi Durya, who is now in class 8 in Government Upgrade High School in Mendhala in Komna block of Nuapada district, has been in hostel from class 1. “Initially I didn’t like staying away from my parents, and I used to cry,” Durya told VillageSquare.in. “But after class three I liked the atmosphere, love and affection of our caretaker brother and guidance of teachers.” He is sure education will fulfill his dream of joining government service.

There are many success stories of children of migrant parents who had either dropped out or never stepped inside a school. Some like Dundi are pursuing higher studies. Many are in private jobs. Some have become teachers, village council members, and government’s daycare center workers, among others.

There is no specific data available of children accompanying their migrant parents to Andhra Pradesh, Telengana and Tamil Nadu to work in brick kilns, but their number is undoubtedly large. Non-profit Aide et Action, in collaboration with the concerned state education departments, is facilitating enrollment of these interstate migrant children at neighboring government-run schools, who are deprived of education.

“Since 2013, we have covered 20,000 children up to 14 years of age in Andhra Pradesh, Telengana and Tamil Nadu, and enrolled 5,000 children in nearby government schools at destination states,” Umi Daniel, director, Aide et Action, South Asia, told VillageSquare.in. “Odisha government is providing text books for Odia children to these destination states so that children can read and write in their native language.”