The despicable practice of untouchability in Varanasi district is keeping the musahar community from accessing state healthcare facilities, and the situation is changing too slowly despite grassroots activism 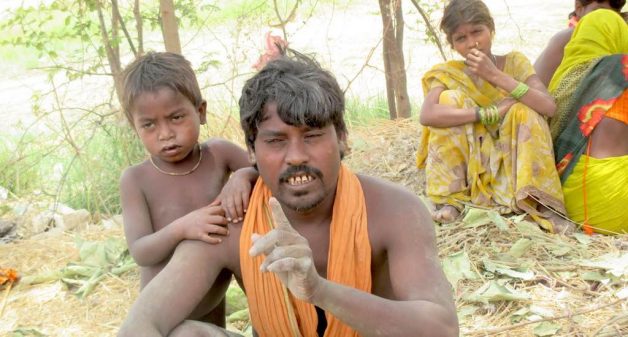 Musahars, considered untouchables by Hindu society, are still being denied government entitlements such as state pensions and housing. The discrimination is blatant when it comes to accessing government healthcare in Badagaon administrative block of Varanasi district in Uttar Pradesh, India’s most populous province.

The scourge of untouchability is so pervasive that musahars, derided as rat catchers, are unable to access services at primary health centers, sub-centers and government-run district hospitals. It has been seen that if pregnant women, or infants accompanied by their parents, turn up at these places, the government healthcare staff try to drive them away by abusing or humiliating them. If a baby is delivered, they have to cough up money to bribe the staff, even if the child is stillborn.

In Koeripur, Lakhapur, Annai and Dallipur villages, the only evidence of the government is the solitary hand pump. These hamlets have no schools, no dispensaries, no electricity and no roads. Officially, untouchability has been banned, but the discrimination against musahars remains so pervasive that in 1989 the government passed a legislation called the Prevention of Atrocities Act. The act made it illegal to parade people naked through the streets, to force them to eat feces, to take away their land, to foul their water, to interfere with their right to vote and to burn down their home.

It hasn’t had much effect on the ground though. For instance, musahar children still have to sit outside classrooms or are kept away from the children of upper caste people.

In Koeripur village, the majority of the 39 families of musahars works in brick kilns or migrates to Punjab or Haryana to work as agricultural labor. While working in the fields, they sweep up the grain left behind on freshly threshed fields. Faced by hunger, they scoop up morsels from the burrows of rodents.

The brazen practice of untouchability by the staff at the government healthcare system and its failures continue to impact the community directly. Auxiliary nurse midwives (ANM) and accredited social health activists (ASHA) in the area are mostly drawn from upper caste and seldom visit the Musahar households. 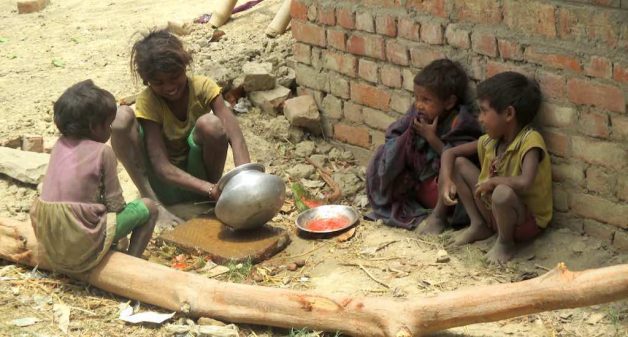 Women are anemic and do not get any iron or folic acid tablets during their pregnancy. Primary healthcare centers in the vicinity are understaffed and lack even the most basic medication. The musahars are forced to opt for expensive private healthcare by taking loans from moneylenders on usurious interest rates. These options are usually prohibitive for that community, which can ill-afford such expenses.

“In 2015, my 7-year-old daughter was suffering from diarrhea. I rushed her to the primary health center. Without giving her any preliminary treatment, the staff verbally referred us to Pandit Deendayal Chikitshalaya at Pandeypur in Varanasi. My daughter died in the way to the Chikatsalaya,” Nanda Vanvasi, a resident of Keoripur village, told VillageSquare.in. “As I am a musahar, I was refused treatment at the primary heath center. Just 20-days after her death, my 2-year-old son suffered from constant bouts of vomiting and started having fits. Since we are refused attention, I did not take him to health center and he died.”

Such tales of exclusion and despair are evident from the state of musahar children in the area. Most are underfed and malnourished. The musahar families are so poor that they children have nothing to eat in the morning and would drink a bit of rice gruel for lunch.

“On the morning of June 26, 2016, I had labor pains, so my husband contacted ASHA activist Hansa Devi, who took me to primary health center at Badagaon. Seeing us, the health worker made a derogatory caste remarks and referred me to the District Government Women Hospital at Varanasi,” Urmila Devi, a resident of Lakhapur village, told VillageSquare.in. “Instead of taking us there, the ASHA worker took us to a private clinic at Sadhoganj Bazar, where we had to pay Rs 5,000. My husband had to take a loan at 10% monthly interest rate. But the child was stillborn. My husband and I tried for the Mahatma Gandhi Rural Employment Guarantee Act job card but officials asked for a bribe and so we didn’t get a job card.”

Mangala Prasad Rajbhar, a postgraduate in chemistry, works among the musahars. He documents their woes and has been relentless in trying to bring fore their issues as a senior functionary of the People’s Vigilance Committee for Human Rights (PVCHR), a Varanasi-based non-profit working among the musahars. 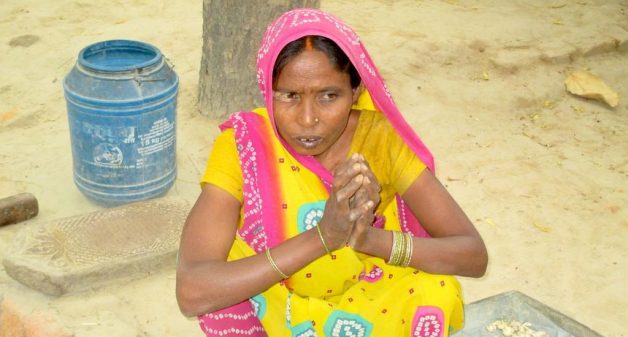 Anita Devi, a musahar living in Dallipur village, had to deliver her babies at home as she was denied healthcare services (Photo by Tarun Kanti Bose)

Speaking of Anita Devi, a musahar living in Dallipur village, he told VillageSquare.in: “Her first child died of malnutrition when he was of 18 months. Her second child Babita had stunted growth. No anganwadi (daycare center) worker visited her home although it was just 400 meters away. Her third child was born malnourished. Untouchability was the reason ASHA or ANM workers denied her assistance and the deliveries were conducted at home.”

“As ANM and ASHA workers think us to be untouchable, they don’t think us to be human beings,” Anita Devi told VillageSquare.in. “All of my four deliveries were conducted at home.”

In Annai village, where 57 families of musahars live, Geeta Devi described the callous attitude of an ASHA worker. “My sister Kiran had labor pains on January 22 last year at 3.30 am. My husband I rushed to the residence of the ASHA activist Manorama Singh and requested her to call an ambulance. But nothing happened till 8 am and a baby boy was delivered at home. After an hour, the ASHA activist turned up and we confronted her,” she told VillageSquare.in. “She gave lame excuses and called on the hospital to stop the ambulance. The boy weighed just 1.5 kg at birth and died within three days.”

“When the ASHA worker saw the newborn baby was underweight, she could have taken him to the doctors,” said Rajbhar. “For two days, the child failed in breastfeeding and there was fear of infection. The ASHA activist could have taken note of it and saved the child.”

A long way to go

Grassroots activism by PVCHR is trying to change this dismal situation on the ground but progress is slow.

“At two blocks in Varanasi district, we have been advocating for putting the primary health centers in order so that there is no discrimination against musahars. We are trying building up awareness among the musahars that they don’t have to pay any government staff for healthcare,” Shruti Nagvanshi, a PVCHR functionary, told VillageSquare.in. “We monitor the role of ASHA and ANM workers so that there is no practice of untouchability. But we have to long way to go for its total elimination.”