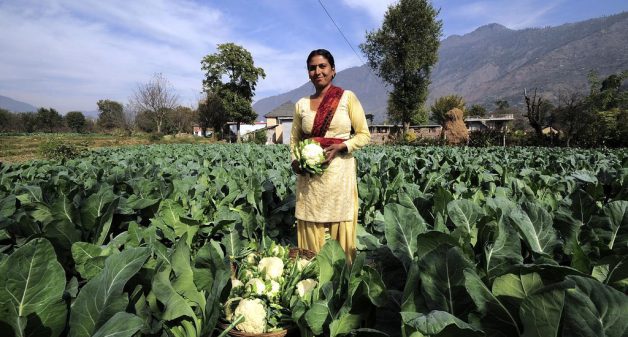 In spite of increasing population pressure, a substantial number of rural households have some land around their dwellings. A majority also has adequate moisture availability, either from rainfall or other sources. Yet, the proportion of rural households that cultivate a vegetable garden in the backyard for home consumption is much smaller than those who have the land for doing so.

Let us look at another common instance. Allopathic doctors have reached the rural masses only in about past 50 years. In fact, if one takes a little trouble in finding out how many allopathic doctors work in the countryside and for the rural people, one would note that a majority staying in far-flung villages has to do without such health service.

Yet, our society has existed for centuries. Clearly they knew how to tackle at least the commonly occurring ailments. Following Charvaka, who asserts that each ecosystem provides a materia medica to treat the health problems of humans, clearly by just using the herbal materials available locally, a lot of ailments had been and can still be cured. So why do people no longer depend on such methods?

A third example is that of classical farm systems in this country. Diversification in activities and land use, over time, in crops and in consumption habits characterizes those classical farm systems in most of the parts of our country. Yet, in region after region, mono cropping had spread epidemically and continues to hold sway — paddy in most of eastern tracts, soybean in Madhya Pradesh, cotton in Vidarbha, and so on.

For example, well over 75% of all cropped land in a whole tehsil Umarkhed in Yeotmal in Maharashtra was under cotton during most of the nineties. It is difficult to find anything but rice growing on the farms in Bengal, Assam or Jharkhand. Sugarcane has replaced everything else in the sugar belt. And such mono crop then introduces huge vulnerability and overdependence on that said crop, making life difficult when things go wrong.

The three instances above have one thing in common — something that was so obvious, so commonplace and so much a part of every one’s awareness and even cultural identity are ignored, and individuals and whole communities adopt something else. Why does this happen?

The chances are that a reader will ascribe this behavior to poor knowledge, poor ability to think through or some such facet allegedly to be seen in rural people. A comment like, “The fools throw an uncut diamond in their hand to run after a glossy piece of glass,” could very well be made.

It is easy to find fault with rural people. But the fact is that all human behavior is replete with examples of this kind. I have noted that in numerous instances and in numerous places, how as individuals and households we ignore some engagement, activity or behavior that contributes real value and we adopt or engage in some thing that has higher rupee value.

I am intrigued by repeated reinforcement of the inference that the sheer numeric representation of some thing exerts a mesmerizing influence on our mind and makes us ignore some thing that is valuable and obvious.

The immediate antecedents are perhaps different in each case but one also sees the mesmerizing influence of many rupees. Here are my explanations of the three instances quoted above for what they are worth.

In the first case, while homegrown vegetables are useful and healthy enrichments to our diets, because they are homegrown, we undervalue them. Besides, it has much less snob value than consuming a high-priced vegetable. There is some thing less glamorous in saying that I plucked the okra from my backyard than saying I paid Rs 20 for 250 gram.

Besides, vegetable cultivation, harvesting, processing and cooking, are all so-called women’s tasks, and after all, how can what the silly women do be valuable? So, the man of the house is tempted to be unruly in tying up bullocks, parking his vehicles, storing some rubble, playing football with his children or many of such acts of using the land, which destroy what the wife has laboriously planted.

The second case of discontinuance of use of local materia medica has more complicated causes. In the first place, much traditional knowledge tends to be in oral traditions and severely dependent on clarity of articulation of the ageing grandmother or grandfather. So even recognizing the right plant and its part (leaves, stems, berries, roots) for use becomes difficult if the knowledge has not been preserved and the recipe for preparing the medicine not known adequately.

Secondly, there is no doubt that for acute and serious conditions, modern allopathic treatment perhaps has the highest chance of offering a cure. Third, there is this behavior of copying our betters going on all the time. Does a Phansalkar use turmeric in warm milk when he has a severe cough or he takes the antibiotic tablets prescribed by an allopath? He may not but in so not doing also acts as a role model to be copied by those who are watching him silently from the sidelines.

Many modern Indians typically undervalue, ridicule and deride our heritage of traditional knowledge. So, expensive allopathic treatments win behaviorally, socially and psychologically every time. Finally, funny though it sounds, people take secret pride in saying how they sold a piece of land so that the medical treatment of the son, father or wife could be done in some hospital in nearby town. Snob value in expenditure is not restricted only to extravaganza in weddings.

The third case of increasing mono cropping has two principal antecedent components in their causes in addition to the fact that the dominant crop may have found its niche in the agro-ecology of the region. . The first is related to adopting diets of the so-called urban social superiors. Thus, everyone wants and starts growing paddy.

The second set of reasons connects to the need for acquiring a cash crop in the portfolio, as lifestyles now demand more cash than in earlier generations. So cotton or soybean rules the roost. The aggressive marketing by marketers of seeds, chemicals, etc., has its own role to play. They paint a rosy picture of high cash income with intense, chemical-dominated, mono-crop farming.

While a number of reasons have been identified above, the question is how can one reverse the trend in enabling rural people make more reasoned, sustainable choices.