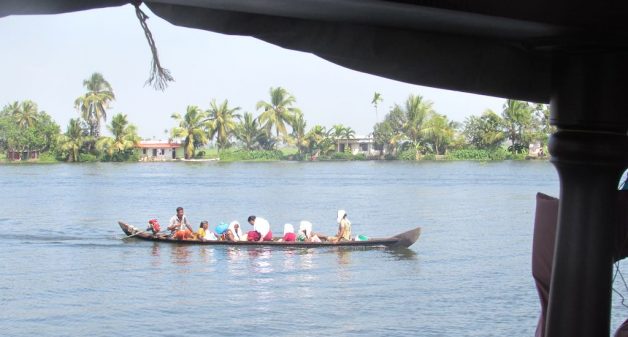 The idyllic backwaters of Alappuzha (Photo by Chithra Ajith)

“Houseboats gave us everything — jobs, money and development. The majority of our water-bound villages underwent a facelift through these floating houses,” says a smiling G. Mukundan Pillai, President of Alappuzha Tourism Development Co-op Society (ATDC), the first tourism cooperative in Kerala.

Around 1,800 houseboats are engaged in backwater tourism in Alappuzha, official records show. As a result of the tourist influx, many interior villages of the district have seen rapid development. Otherwise unnoticed strips of land captured international attention by its picturesque backwaters, lagoons, wetlands and freshwater rivers. “Our fish, vegetables, fruits and meat markets have flourished, as these houseboats host around 5,000tourists daily,” houseboat operator Jinu Kurien told VillageSquare.in.

Many occupations opened up due to this. For instance, rural households have opened massage centers to attract travellers. Visitors can enjoy a traditional massage in these centers while the boats are berthed in the banks for rest. “Some 25 years ago, many of these villages were financially weak areas. Now we can spot shops, laundry centers, eateries, and of course, better homes,” says Mithasayan, a local farmer. Fishermen sell fresh fish directly to houseboats in higher rates.

“When I came here 35 years ago after marriage, this area was a lonely place. Now things have changed. Everyday, a number of houseboats reach by evening and anchor here overnight. Guests take this time for a country walk and most of them love interactions with villagers,” he said. “These watery villages were earlier inaccessible and there were no travellers. But now, new guests visit us daily and enjoy our snacks and tea. This growth happened gradually.”

The town of Alappuzha is surrounded by canals and a network of water bodies connects all the villages in the district. People use small boats to travel between villages.

“In old days, these country boats were used for transporting coir, building materials like sand, bricks, cement and other agricultural produces like rice, copra, as the place is mainly connected with waterways. All boats were operated manually using long rowing sticks. Now mechanized boats are being used. The lifestyle of the local villagers has changed,” Salman, a diesel pump operator, told VillageSquare.in. “Nearly 2,000 boats cater to tourists daily. Diesel consumption has increased, as have the number of pumps. It created a lot of job opportunities.”

The banks of the canals in the area now have small marketplaces with provision shops, stationeries shops, snack bars and even with ATMs, which was a distant dream for the villagers even a few years ago. Around 100 local food stalls on the banks operate to cater to tourists. There are some 40-50 tender coconut outlets doing good business. Many fish shops and ice cream sellers happily earn a decent income that depends on the houseboats.

“I know many families earning money by supplying electricity through diesel generators for houseboats to run ACs at nights after they have finished a day’s cruising,” said Deepa, a housewife. Night cruising is not allowed here. “Many houses provide current supply for 4-5 boats everyday. This income enables them to lead a better life,” Deepa said. “We are conventional farmers. Many women from our neighborhood were laborers in the paddy fields. Now we cant depend on them as they seek their luck in new areas of occupation like laundry work, cooking fish, meat and batter for the houseboats. These jobs have attractive incomes.”

Today, around 5,000 people are directly engaged in this sector. The capacity of houseboats varies from single bedroom to 4-5 rooms. Each boat needs 2-5 staff, including an engine driver and cook. And 10,000 families enjoy financial benefits and job security indirectly. In short, houseboats play an important role in the present economy of Alappuzha.

“Whenever our guests book a trip to Kerala, Alappuzha houseboat cruise is a mandatory item for most of them. The experience and service is excellent. We witnessed the prosperity they gained through these years closely,” P. Dinesh, Director of Indus Traveller, told VillageSquare.in. “Alappuzha never leaves a traveler unhappy,” the Kerala-based tour operator said.

“Alappuzha was marked as an agricultural area and a water trade center in earlier times. Paddy, copra, coconut oil, marine products and coir defined its economy,” said a government official who declined to be named. “Now tourism sector is the backbone of Alappuzha’s financial growth.”

“Houseboats opened a new source of income for me,” a woman resident of Kuttanadu said. “They asked me to prepare batter for breakfast. I sell batter for idly, dosa and appam. Sometimes they give order for marinated fish with homemade masala. There is no off-season and a fall in demand. This gave me financial security.”