Revived with the support of the state government and social enterprises, the traditional metal craft Dokra has found its place in art maps, giving artisans in the remote village of Bikna much-needed financial stability 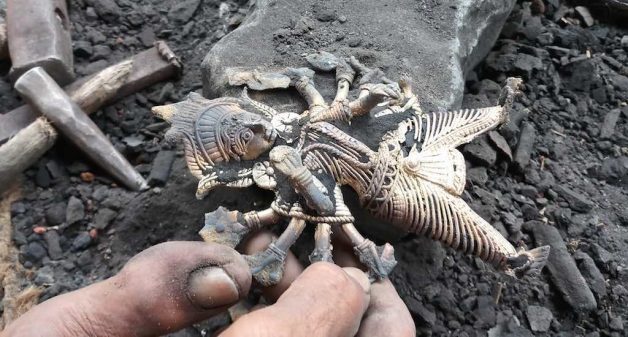 Bikna, a nondescript village in remote Bengal, where people endured poverty and hunger for several years, has scripted a story of success and prosperity, thanks to the West Bengal government and social enterprises that have given a new lease of life to an age-old dying craft.

Situated on National Highway 60 that connects Asansol and Raniganj, Bikna in Bankura district is known for the Dokra craft that has made its presence felt across the globe. Some of the artisans have not only taken their work overseas but their incomes have also crossed five digits.

Dokra, an ancient craft of metal casting through the hollow wax method, is believed to be over 4,000 years old. Heritage enthusiast Rangan Datta believes that the craft originated from Chota Nagpur in neighboring Jharkhand state several centuries ago.

“There are no clear records but a common belief is that the metal smiths were from Chota Nagpur plateau,” Datta told VillageSquare.in. “As their numbers increased, and as they began to move out in search of livelihood, several of them came to Bengal and settled in Bishnupur centuries ago.” The dancing girl of Mohenjo Daro is believed to be one of the earliest artifacts of Dokra.

In 1970, the then state government relocated the craftsmen to their present location in Bikna, a 2.5 acre vacant land, to save the ancient art and to rehabilitate the craftsmen. But the change of place hardly changed the craftsmen’s fortunes.

There were no toilets, drinking water and other basic facilities in the new neighborhood. The children could hardly go to school.

Dhiren Karmakar, in his late sixties, was one of the first artisans who relocated to Bikna. “We worked amidst high temperatures from the furnaces for several hours a day which took a toll on our health,” he told VillageSquare.in. “We toiled hard but the middle men consumed the major pie because we had no direct contact with the market or buyers.”

Most of the craftsmen started to ply rickshaws to earn a morsel of food for their families. Some migrated to other places in search of a better livelihood. “The age-old craft was almost on ventilator support,” said Karmakar.

The craftsmen’s fortunes began to change for the better when the government that came to power in 2011 decided to intervene. 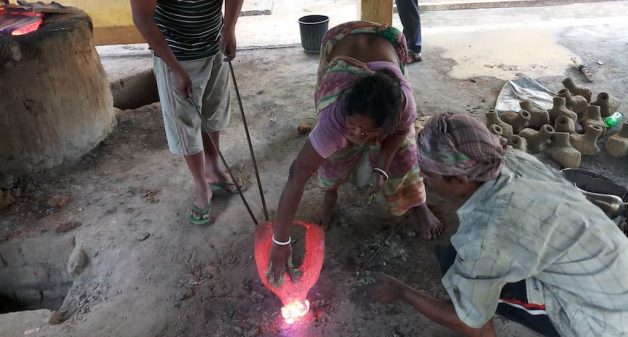 With government intervention, the artisans have better furnaces and improved working conditions (Photo by Gurvinder Singh)

A memorandum of understanding (MoU) signed between the state government and United Nations Educational, Scientific and Cultural Organization (UNESCO) in 2013 enabled the formation of rural craft hubs (RCH). The hubs, based on an UNESCO-endorsed model called ‘Art for Life’ were started at 10 craft locations, including in Bikna in 2014.

“The major challenge was to get the artisans out of the harsh and risky work environment,” Rajiva Sinha, additional chief secretary of Directorate of Micro, Small and Medium Enterprises of the West Bengal government, told VillageSquare.in.

The entire process of making Dokra artifact involves melting metal at very high temperature in furnaces. “We invited experts from National Metallurgical Laboratory, Jamshedpur to develop a customized furnace for the artisans,” said Sinha. “We also facilitated market linkage through the showrooms of Biswa Bangla Corporation.”

The artisans received support from Bangla Natak as well. A social enterprise working for rural folk artists, Bangla Natak created awareness by organizing fairs. “We took the artistes to different art fairs held across the country and also abroad, giving them the exposure they needed,” Amitava Bhattacharya, founder of Bangla Natak, told VillageSquare.in. 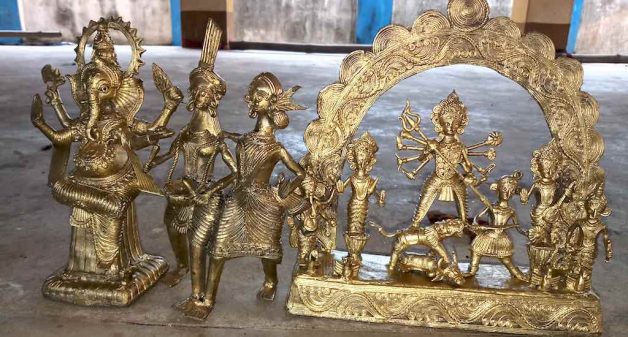 After Bangla Natak took prospective buyers to Bikna and explained about Dokra, they began to contact the artisans directly for placing orders. “Besides, they also receive online orders,” said Bhattacharya.

Change for the better

Harendranath Rana (45), one of the artisans who visited France in 2015, said that Dokra had changed their lives. “Over 150 artisans living here have collectively done a business of more than Rs 3 crore in the past four years,” Rana told VillageSquare.in. “The direct link with buyers has been hugely beneficial.”

Some of the artisans earn in several lakhs annually. Geeta Karmakar, a widow in her fifties, who has also travelled to London to showcase her products said, that Biswa Bangla stores opened by the state government from 2014 have proved to be a major turning point in their lives.

“The Biswa Bangla shops are our main customers,” Geeta Karmakar told VillageSquare.in. “The display of our products at their stores in airports and other places has increased awareness about Dokra.” Her children are also craftsmen, as practicing the art has become profitable.

The craftsmen’s younger children have begun to go to school. “My father sends me to school because he is earning well and I want to achieve something in life to make my parents proud,” said Gautam Karmakar, a student. Bikna now has clean toilets and potable water. “The future looks bright now,” said Rana.